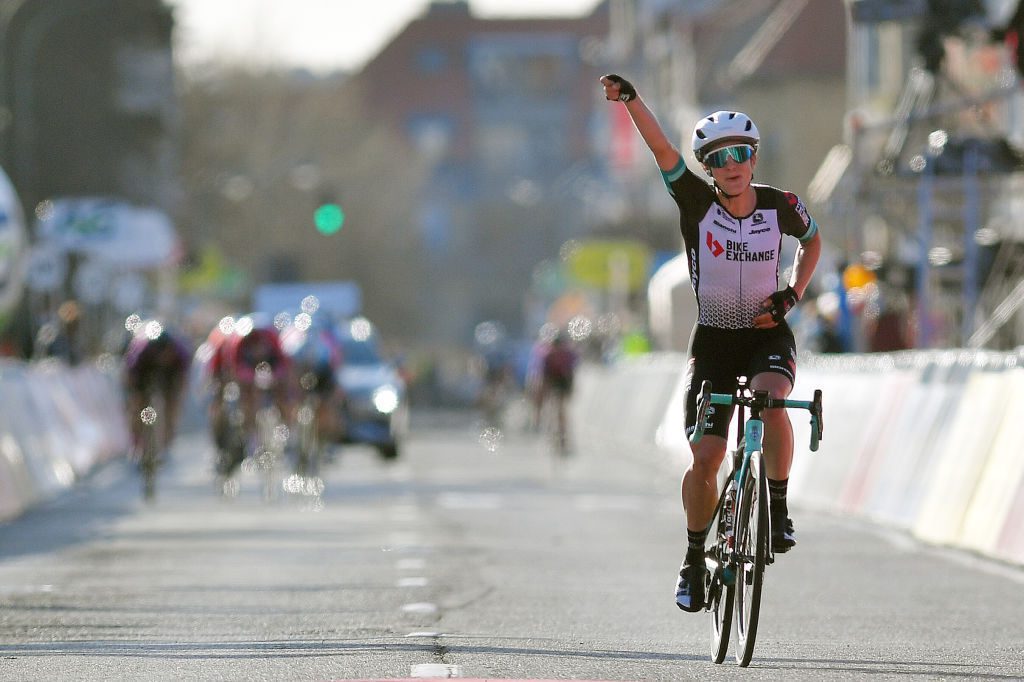 Formerly known as Driedaagse Brugge De Panne, the women’s race has always been a one-day race. For sponsorship reasons, the race was called the Oxyclean Classic in 2021 but Exterioo takes over this season. The season-long Belgian Cup has stopped being sponsored by Lotto and Exterioo took over – they’re the reason for the green gnomes given out as prizes this season.

Since the race’s inception in 2018, the race has seen 3 big bunch sprints and 1 notable solo win by Grace Brown last year. The parcours is super flat with nothing of note to worry about. The wind is about the only hazard for the riders but even that isn’t forecast to be too bad on Thursday. A 6mph wind from the north will face the riders but with no rain forecast, shouldn’t cause too many problems.

Jolien d’Hoore won the inaugural edition of Driedaagse Brugge De Panne in 2018, where Mieke Kroger was able to hold off the chasing peloton until just outside 1km to go. The sprinters ramped up and d’Hoore was able to outpower Chloe Hosking to take the win. The following year, Mitchelton-Scott led the peloton with 3km to go. Trek battled with Ceratizit under the flamme rouge and Kirsten Wild patiently rode the wheels. With clear air ahead of her, she launched the sprint and just stayed ahead of Lorena Wiebes and Lotte Kopecky.

2020 saw the controversial finish between d’Hoore and Wiebes. Jolien d’Hoore launched her sprint to the right before drifting back across to the left to shut the door on a fast-approaching Lorena Wiebes. With the cycling world already nervous as a result of the then-recent Jakobsen/Groenewegen crash at the Tour of Poland, the commissaires relegated d’Hoore. Lotte Kopecky was on the podium again but well behind the front pair.

Last year, Grace Brown took a hugely impressive win as the peloton was broken apart in the wind. Brown attacked with 10km left to race and took advantage of the small group of sprinters. With no teammates to help chase, Brown was able to hold her lead until the finish line for her first Women’s WorldTour victory.

Lorena Wiebes is on a 3-race winning streak at the moment and it’s tough to see it being broken at Brugge-De Panne. The 2020 winner is clearly the strongest sprinter in the women’s peloton and in top form. Team DSM will marshal around her and ensure that she’s in the best position to win.

Trek Segafredo did a great job at the weekend with Elisa Balsamo winning Trofeo Alfredo Binda. Balsamo was comfortably the best sprinter at the end of a tough race. The course is a lot easier at Brugge-De Panne, so we should see Balsamo go head to head against Wiebes again. She’s the only rider to beat Wiebes in a sprint in recent years. Her teammate Chloe Hosking also has a good record here but we’ll probably see her perform a similar role to the one she did at Ronde van Drenthe as the final lead-out.

SD Worx should be fully behind Lotte Kopecky, although they do have a number of wildcards to play as always. After that impressive uphill sprint at Strade Bianche, Kopecky has been on the podium in her two races since. Like plenty of other riders, I don’t think she will be Wiebes in a head to head sprint but she can absolutely be on the podium again at Brugge-De Panne.

Emma Norsgaard finished 2nd here last year behind the solo winner Grace Brown. She won her last race at Le Samyn des Dames and has had a mini break from racing for 3 weeks since then. She’s got a chance to win but against all of the top-drawer sprinters here, edging onto the podium might be her best possible result.

UAE Team ADQ’s Marta Bastianelli doesn’t have the best record at Brugge-De Panne. She’s had a best of 7th in 2019 but her other 2 editions have seen Bastianelli finish well down the order. With Bastianelli in good form though in 2022, that could change. She’s won 3 times already, including at Omloop van het Hageland. Against this amount of pure sprinters, the podium might be a tough ask.

After a tough start to the year with a crash at Vuelta CV Feminas, Chiara Consonni is starting to hit her stride now. In the last 5 races, Consonni has finished no lower than 7th place. The always impressive Valcar lead-out is guaranteed to put her into a good position and it’ll be up to her to get the job done.

FDJ’s Clara Copponi looks set to return here after missing out on Nokere Koerse. Copponi crashed during Ronde van Drenthe and despite finishing 4th, she needed some time to recover. She’s been on an absolute tear this year with no result lower than 6th so far. The expected sprint finish here should see her do well, provided she has recovered. Then there’s always Grace Brown. A repeat will be tough on what is forecast to be a non-windy edition. She will keep the peloton on its toes though and surely they won’t let her get an advantage again.

Canyon SRAM’s Alice Barnes crashed out of Nokere Koerse and may not race here. Before then, she’d finished in the top-10 in her last 5 races. It’s her best run of consistent form since 2017. Hopefully her crash hasn’t derailed that form. Teammate Sarah Roy has done well at Brugge-De Panne in the past, finishing 4th in 2020. She’s another who may be outpowered by the pure sprinters, so will be looking for a reduced bunch finish.

I’d hoped that the move to Ceratizit WNT would be the push to the next level for Sandra Alonso but so far her only good result was 5th at Vuelta CV Feminas. On this sort of flat course, there should be no reason for her to not be at the front. However, we saw her regularly dropping back at Bloeizone Fryslan. Her teammate Maria Giulia Confalonieri is getting good results though. Finishing on the podium at GP Oetingen and top-10s at Omloop het Nieuwsblad and Drentse Acht.

Rachele Barbieri seems to be getting the sprinting nod for Liv Racing Xstra at the moment. After winning a flat stage of the Bloeizone Fryslan this year, there’s a chance for her here. It’s tough to rule out teammate Alison Jackson as well. She was 9th in 2020’s Brugge-De Panne and took 2nd from a small group at Drentse Acht. If the race does break up, Jackson seems to be getting on the right side of important splits at the moment.

Susanne Andersen is back to approaching her best but the sheer firepower racing here might make it tough to finish in the upper part of the top-10. Her best result so far in 2022 is 3rd in the last stage of Setmana Ciclista Valenciana – a reduced bunch sprint that suits her.

It’s tough to call which of the BikeExchange-Jayco sprinters will get the nod here. Arianna Fidanza was on course for a strong result at Nokere Koerse before getting squeezed between Consonni and Van ‘t Geloof. Her best result so far is 5th at GP Oetingen and she looked on course to match that on the Nokereberg. Teammate Georgia Baker has also been doing well. After finishing 4th in the last stage at Setmana Ciclista Valenciana, she was 7th at GP Oetingen. I think Fidanza will be the preferred choice, provided she has recovered from her spill at Nokere Koerse.

I’m going for Maike van der Duin as the preferred Le Col-Wahoo option ahead of Marjolein van ‘t Geloof. On flatter races like this, Van der Duin has been getting the strongest results. After a strong showing and a pair of top-10s at Bloeizone Fryslan, she followed it up with 5th at Drentse Acht. She’s got a chance for a top-10 result at a WWT result here.

Kaia Schmid finished a respectable 31st for Human Powered Health at Nokere Koerse on a tougher circuit with plenty of climbing. On this flatter course, the first year pro stands a chance of being able to unleash her sprint at the front of the race. So far, her 16th in the final stage at Setmana Ciclista Valenciana is her best result.

NXTG by Experza’s Mylene de Zoete is knocking on the door of a big result. After finishing 9th at Vuelta CV Feminas, De Zoete has been just outside of the top-10 at Drentse acht and Nokere Koerse. It’ll be interesting to see where she stands against the best of the women’s peloton here but there’s a chance to break into the top-10 again.

Each time I include Minke Bakker as an outsider she ends up being a DNF so far this year! She continues to do well at the non-UCI level though, after winning Stalhille, she was 6th at Ooike. A good ride and she can be one of the first 20 riders over the line.

Finally, I’ve gone for Julie de Wilde as Plantur-Pura’s best option. The young Belgian has quietly been doing well in 2022 with 9th at GP Oetingen and 18th at Nokere Koerse. With this being her second year in the pro peloton, it looks like she’s beginning to deliver more and more on the promise she showed in Juniors. A flat parcours should see a first top-20 in a Women’s WorldTour race. 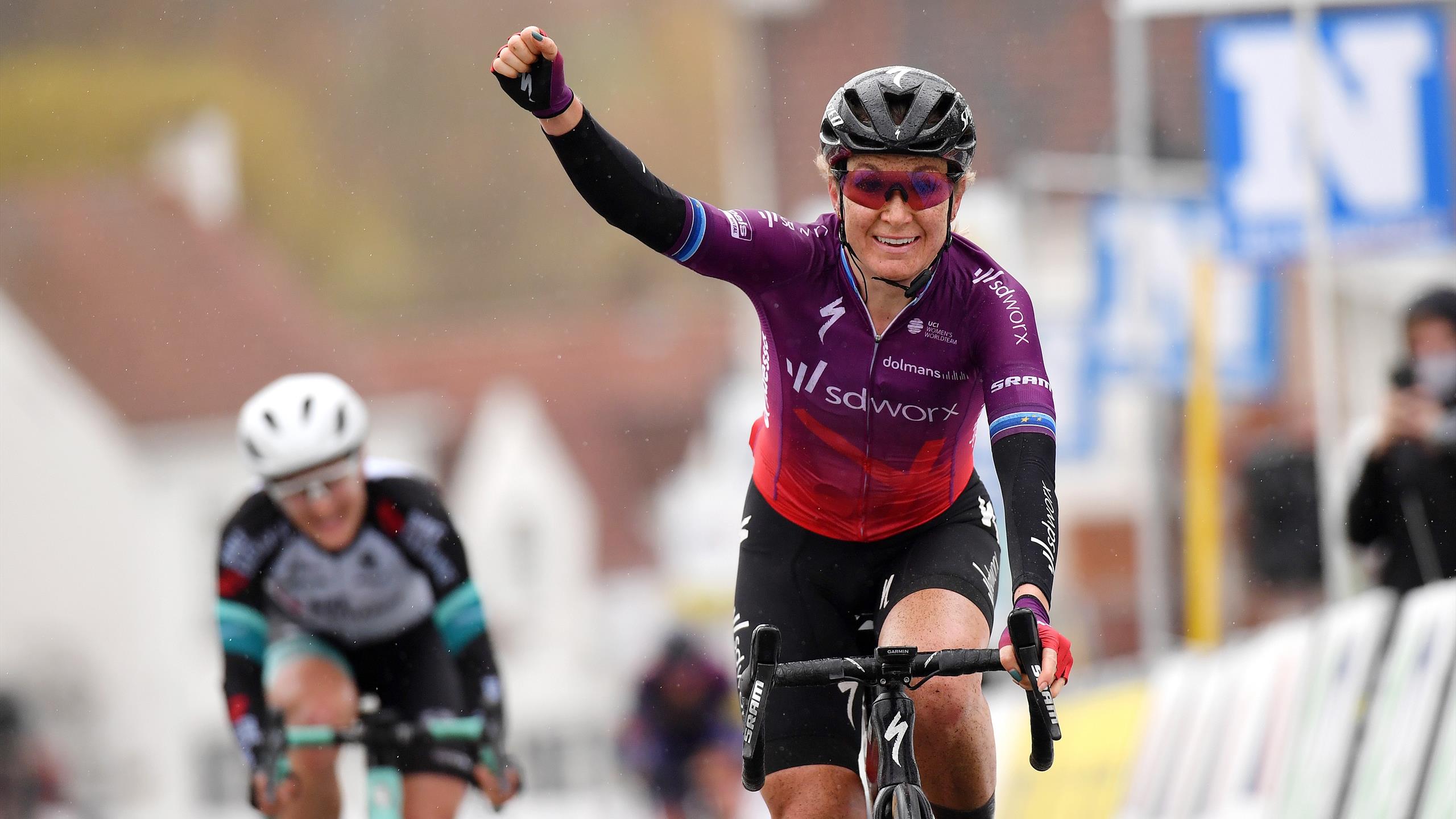