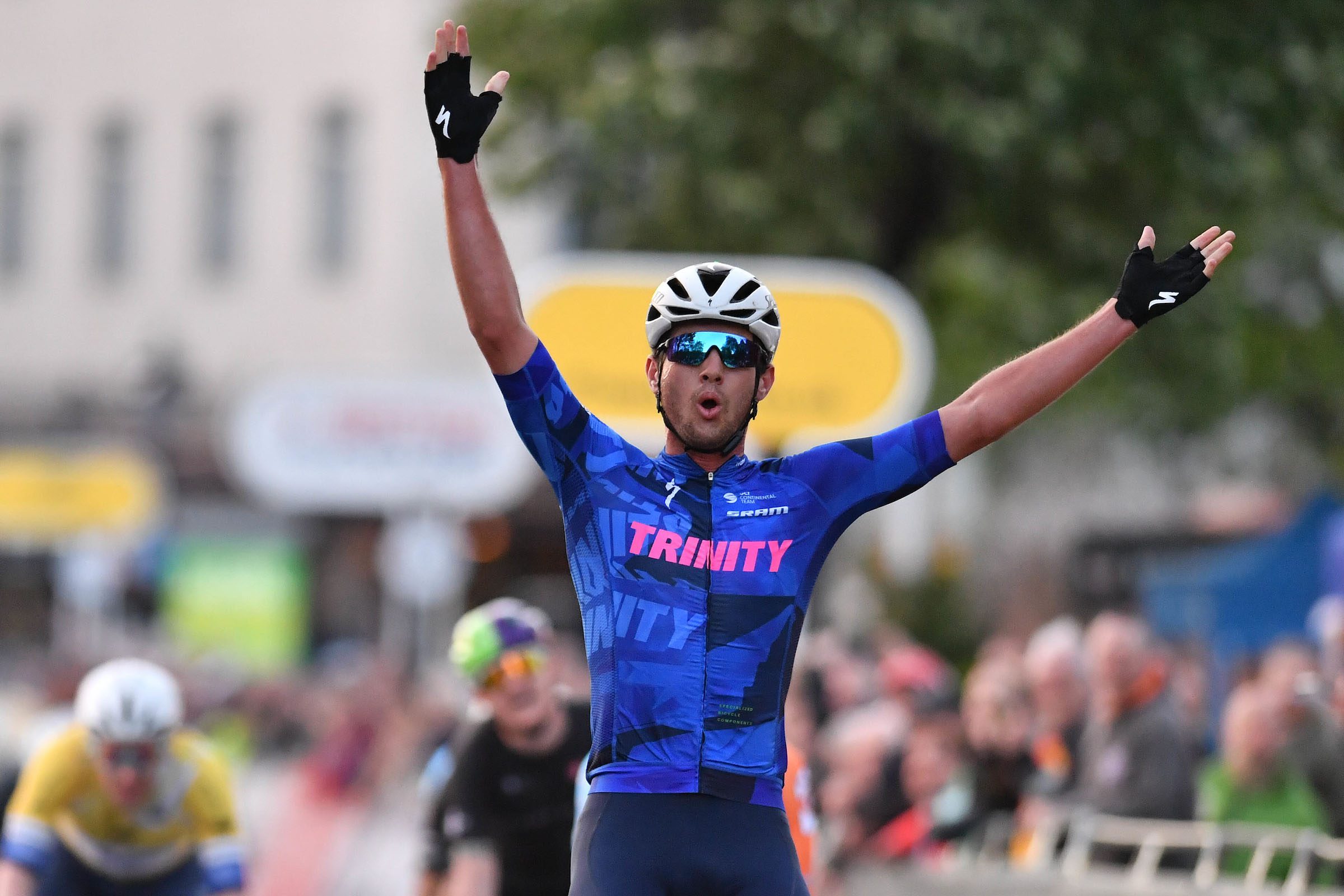 Ribble Weldtite’s win saw the defending champions move into second in the Sportsbreaks.com Tour Series, four points off the lead, while for Jadan – Vive Le Velo it marked the team’s first win in seven years of competing in the team-based series.

However after the evening’s two races, it was still Wiv SunGod and Pro-Noctis – Rotor – Redchilli Bikes p/b Heidi Kjeldsen in the series leaders’ yellow Freewheel.co.uk jerseys, albeit with the former giving up two points after local rider Thomas Mein crashed out following a touch of wheels mid-race.

Having started the first two events short of riders due to injury and illness TRINITY Racing controlled the men’s race before an exemplary display of tactics saw American crit champion, and the weekend’s Lincoln GP winner, Luke Lamperti sitting up in the final sprint to allow Quick to take his first win in the Sportsbreaks.com Tour Series.

“It was a really good performance,” said the 22-year-old from Brisbane. “The boys were pretty unbelievable out there, three of them just controlled the race from the get-go. Then we had Luke – he’s a bit of a tactical genius in the finish there – pulling us in perfectly to the finish and we both got our arms up so it was beautiful.

“Basically, the plan was to just out and control the race, and after we got Luke up at Lincoln a few days ago, and we came out today and DS Ian Stannard made the call that it was my turn so that was really nice.”

Joining Quick as a first-time Sportsbreaks.com Tour Series winner was Team LDN – Brother UK rider Sammie Stuart.  A full-time training manager and on-call firefighter for Lancashire Fire and Rescue Service, Stuart’s win came after an impressive ride in round one and weekend’s performance in the Lincoln GP.

Stuart then worked well with breakaway companions Hall and Guerini to build an unassailable gap, with the latter the first to be distanced inside the final three laps.  With a tour to go and sensing Hall lagging, Stuart struck out on her own for a comfortable solo win by five seconds.

Speaking afterwards Stuart said; “It was a great race for me, with a climb in the circuit it suited me really well. The team is buzzing for me. It wasn’t just myself, there are obviously people that hold up the peloton too on my behalf so a massive thanks to the team for being able to do that for me.

“I worked very hard to close the gap, once I got with those other riders it was just a case of working together till the end of the race. I think the gap started about 10 seconds and we went up to 50 seconds so that was brilliant work by us three.

“I knew that I had an advantage because I was talking, and I could hear them two heavily breathing so I just took that opportunity and just went.”

Despite three riders being caught up in crashes Pro-Noctis – Rotor – Redchilli Bikes p/b Heidi Kjeldsen still took second place on the night to hold a nine-point lead over Team Boompods with four rounds remaining.  Behind a trio of teams are within two points of second place in what now looks set to be the best of the rest competition in the women’s Sportsbreaks.com Tour Series, with defending champions CAMS – Basso failing to score in Sunderland and now sitting seventh overall.

The fastest Laps of the night went to Stuart and Global 6 Cycling’s Miguel Fernandez.

Highlights of the Sunderland event will be broadcast on ITV4 at 7pm on Wednesday 11 May.  Racing continues on Thursday (12 May) with a return to Scotland for round four from Stranraer on the west coast of Dumfries & Galloway.

The action gets underway with the women’s race (4pm) followed by the men’s race (6pm) with both events streamed live on the Tour’s YouTube channel – youtube.com/thetourcycling – with no geo-restrictions.