Inside reconnaissance and equipment decisions with technical director Matt Shriver

Every one-day classics road race has its own personality. Milano-Sanremo is a long fuse firework. Strade Bianche is a punchy showcase for swashbucklers. Paris-Roubaix is a tormentous battle of attrition.

Each takes special planning among sports directors, riders and mechanics to make sure that no detail — from tactics, to fitness, to the bikes themselves — goes overlooked.

Trek-Segafredo technical manager Matt Shriver oversees equipment for the men’s and women’s road teams. He is right beside riders as they make reconnaissance trips to the most important cycling stages in the world to learn the intricacies of each parcours and determine the bike specifications — the frame, wheels, tire pressure, etc. — they’ll be using on race day. 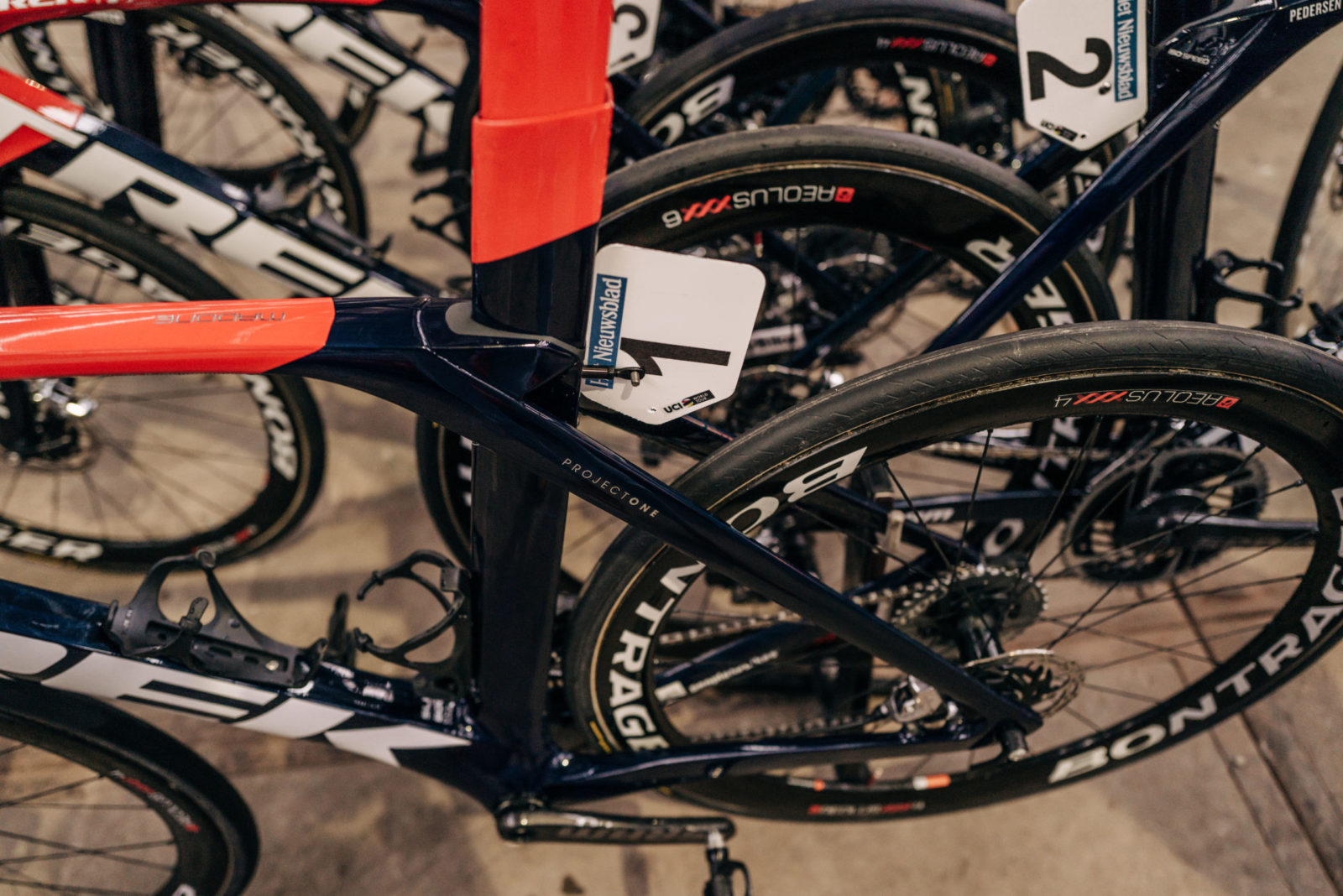 Shriver’s job is vital to the team’s success, but it’s also one he hopes goes overlooked. If anyone is talking about equipment after a race, it’s often because something went wrong. Instead, if all goes according to plan, that equipment will accent a winning rider’s physical prowess and tactical savvy — what bike racing is all about.

With apologies to Shriver, his work is worth highlighting, however, especially for a Trek-Segafredo team that has one of the strongest Classics squads in the men’s and women’s pelotons. This year is particularly exciting, with the women expected to race Paris-Roubaix for the first time ever (albeit a little later than scheduled — the 2020 race was cancelled due to the Covid-19 pandemic, and the 2021 edition has been delayed to early October).

Shriver was kind enough to walk us through a standard Classics reconnaissance process, and dive into a few specifics about the women’s preparations for the Hell of the North. He also shared the specs for Lizzie Deignan’s bikes for Tour of Flanders, Paris-Roubaix and Liege-Bastogne-Liege to give us a sense of how very different, and not-so different, bikes can be from race to race. 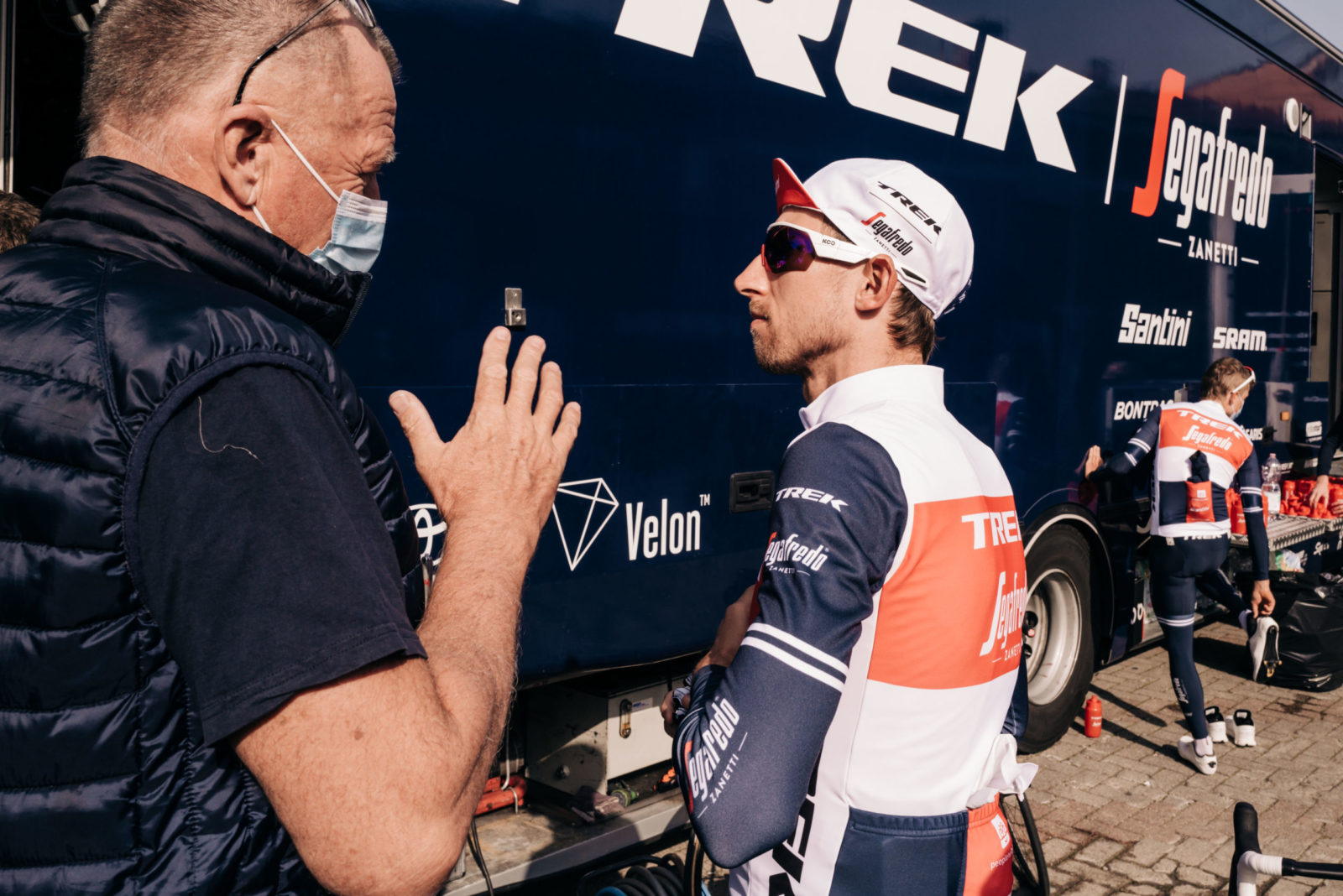 What’s on the menu?

Shriver compares Classics recon to studying for a final exam: “You’ve got this big event, a massive test, and we’re just trying to make sure we’re doing our homework to be ready for it.”

His goal is to educate all the riders on their options. No bike will ever be perfectly suited to courses that frequently feature multiple surfaces, whether that’s pavement, gravel or cobblestones. And because conditions change, the same bike setup may not always work for the same race.

Riders need to be comfortable on every possible configuration of their road bikes. For example, riders might use the lightweight Emonda at Strade Bianche, where the selections are likely to occur on climbs, with low-pressure 28-millimetre tires that strike a balance between low rolling resistance and comfort for the bumpy gravel sections. For Paris-Roubaix, which features fewer climbs but even terser terrain, they may ride the slightly heavier, but more relaxed and stable, Domane frame with even lower pressure and more absorbent 30-millimetre tires. The Madone has the same aggressive geometry as the Émonda, but with more aerodynamic benefits for when riders just need pure speed. 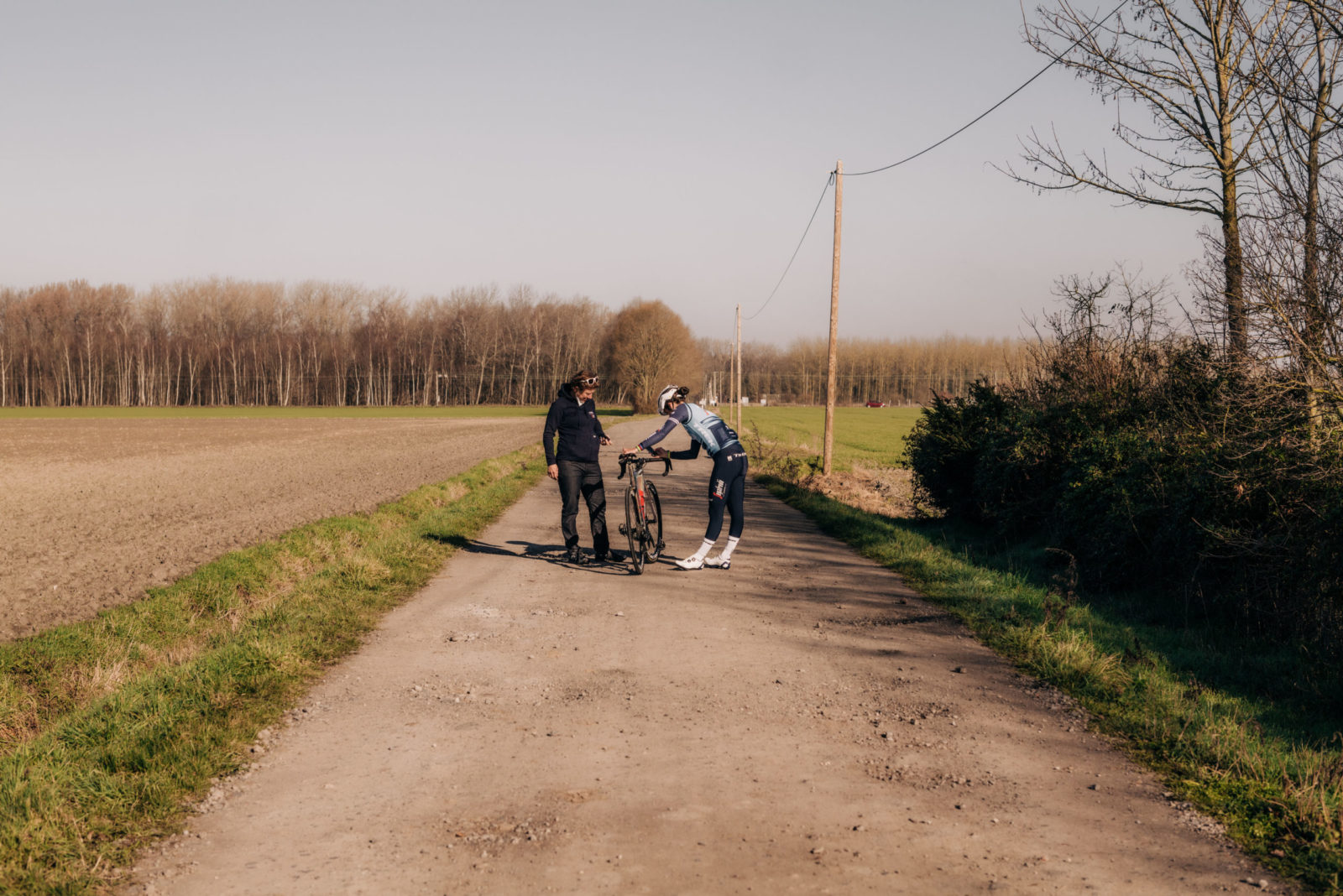 Shriver particularly enjoys showing the riders different configurations that they can try — handing them the “menu,” as he calls it. Everything in the equipment quiver — from handlebars, to tyes, to wheels with a range of rim depths — is at their disposal. Often riders will start with the bikes they’re accustomed to and gradually realise the benefits of a specialised setup after multiple trips onto the course.

“It’s cool to go through that whole process with them to see where we started, which is using your regular road bike, to where you have these amazing tools,” Shriver says. “They like to get into it too and feel the differences. We collect a bunch of data and break it down for them after to show them, ‘You went the same speed as you were on your Emonda, but you were doing this many watts less.’” 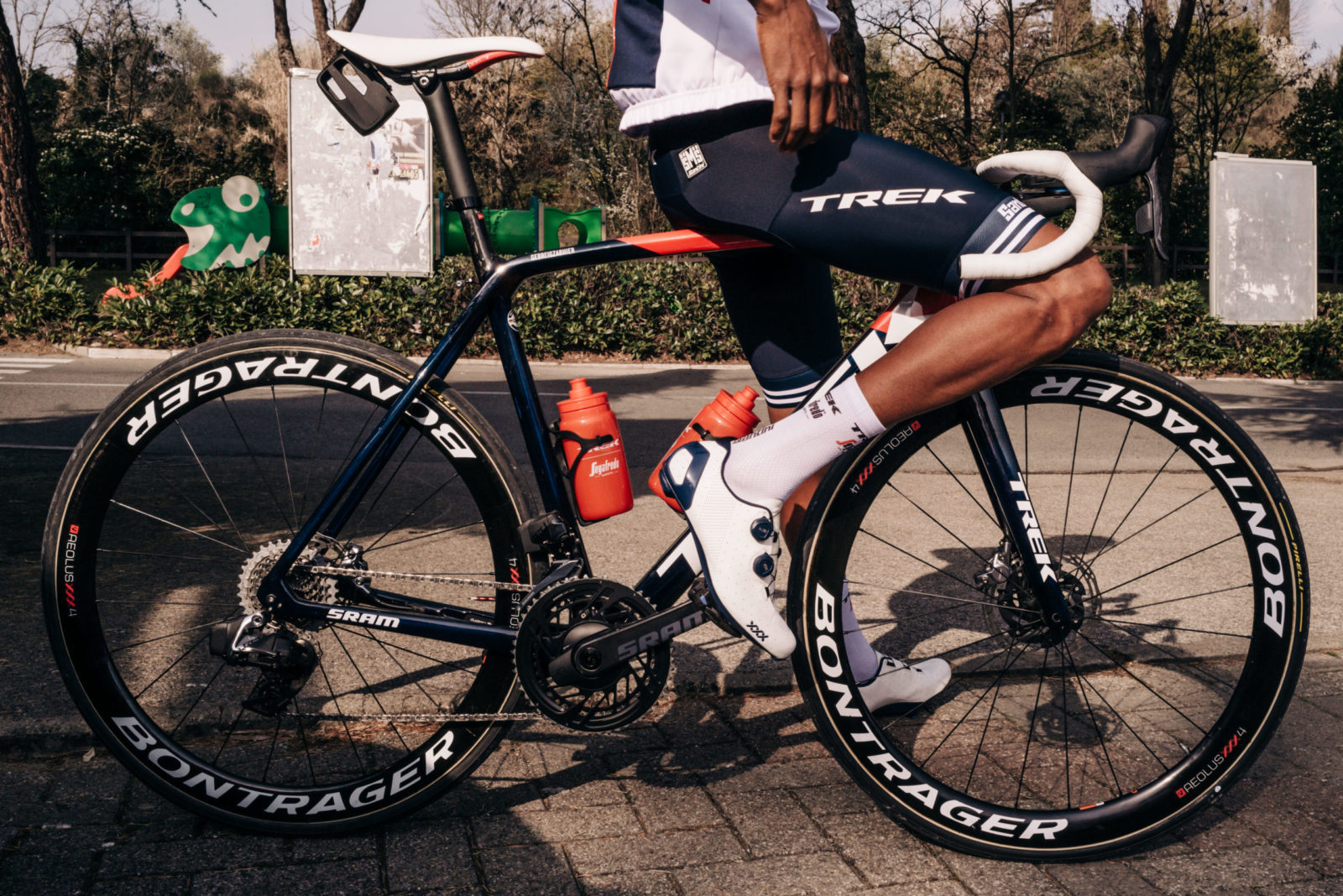 Bikes can vary across teammates, but typically not much. Every bike is configured so that it can win, even if a rider isn’t a team leader and is expected to do the majority of their work in the early portions of a race. A few of the men’s Paris-Roubaix riders who are expected to be domestiques will ride on the Madone to help them with pace-setting before the major cobble sections begin, but that decision is an exception for a unique race. For the most part, the team doesn’t want to limit its options, because you never know when a rider might find themselves in a break with a chance to get to the line.

“Almost everybody rides the Domane at Roubaix, purely for the reason that the course is just so gnarly,” Shriver says. “It’s such a nice bike for making it to the finish, really.” 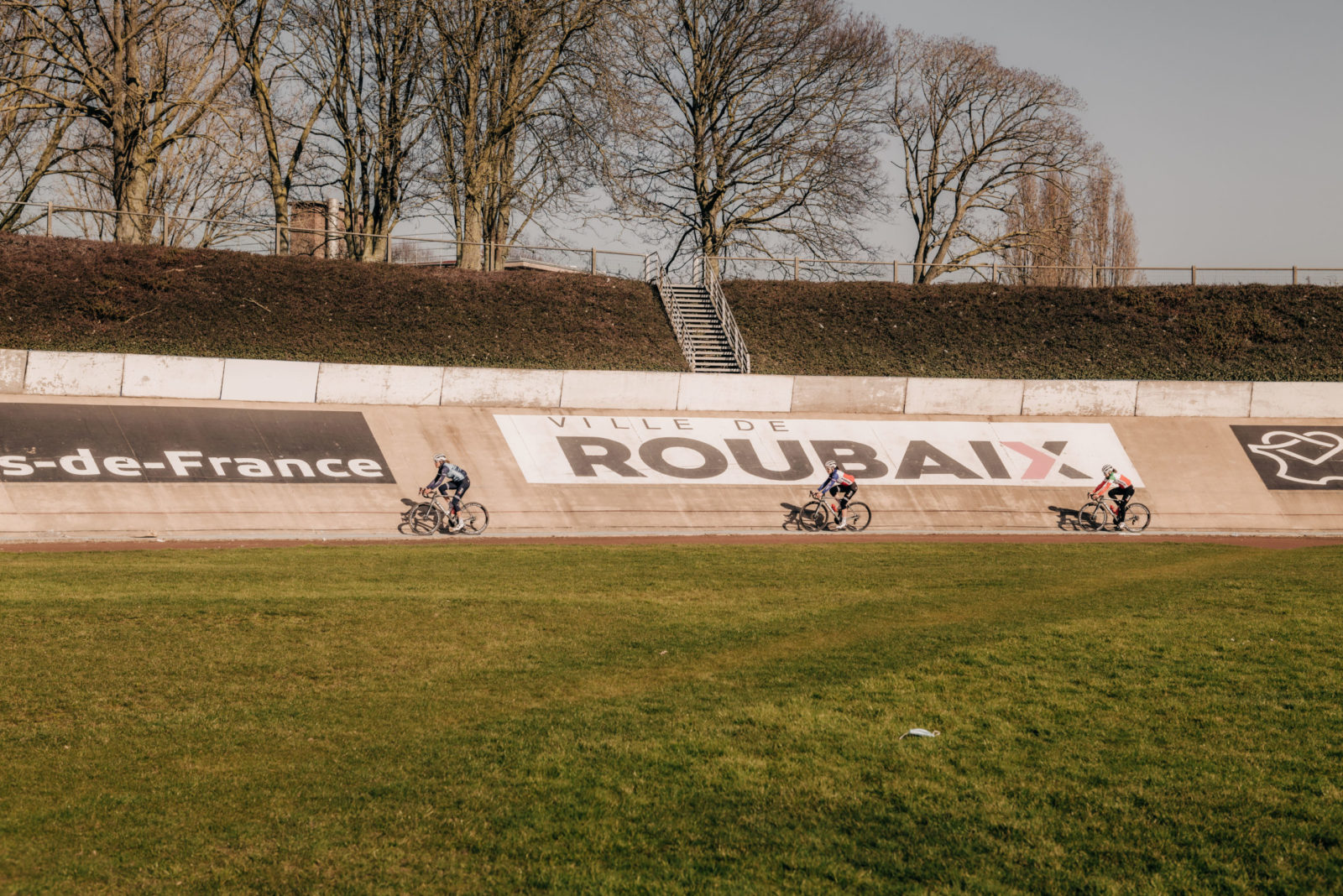 Preparing for the first women’s Paris-Roubaix

Typically, the men’s team will make two recon trips to the Paris-Roubaix course ahead of race day: Once in the fall, and again in the spring, close to the date, to confirm their tactical and equipment decisions.

Because the women will be racing Paris-Roubaix for the first time, the team has been even more diligent. They’ve done two trips in 2021 already, and a third had been planned. In total, the women were set to do five rounds of recon, with two done in 2020 in preparation for last year’s cancelled race.

The women’s bikes for Paris-Roubaix won’t be the same as the men’s. The biggest difference is weight: women riders tend to be much lighter than men, and as a result can be more susceptible to the bumps and pounding of cobbles. 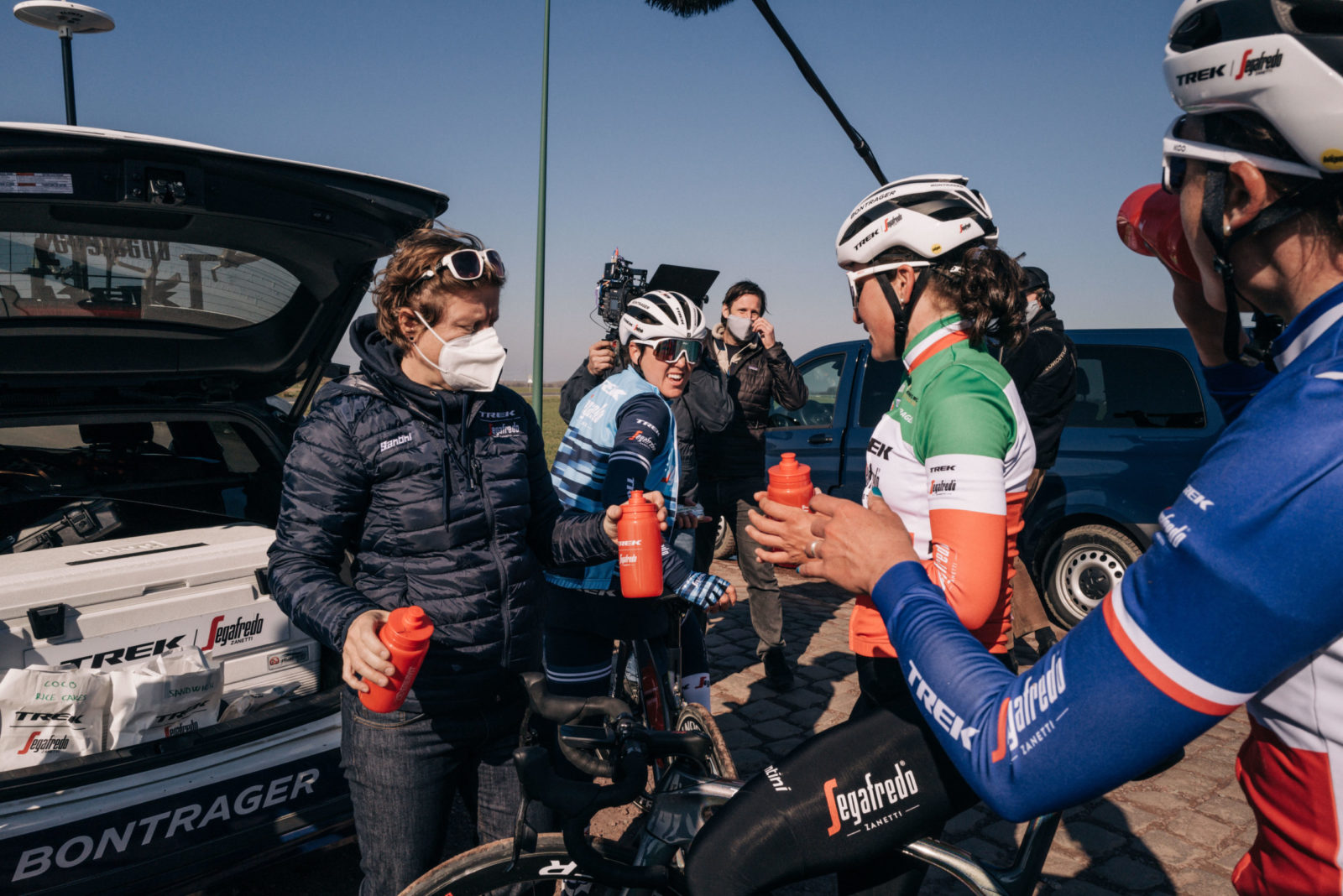 At Paris-Roubaix, maintaining stability and momentum is key to success. To that end, Shriver found that the women’s team could successfully run a much lower tire pressure than he had anticipated. The riders were fully on board, in large part because they could quickly feel the benefits during their test runs.

“Since they’re riding on their bikes every day for hours and hours, they’re really in tune,” Shriver says. “They can feel a millimeter that you and I wouldn’t feel as normal riders.”

The tinkering process doesn’t stop at recon. Riders use messaging apps to ask questions or report any issues even when they’re not in person with mechanics — say, if their tire pressure felt too high or low, or their gears were skipping. 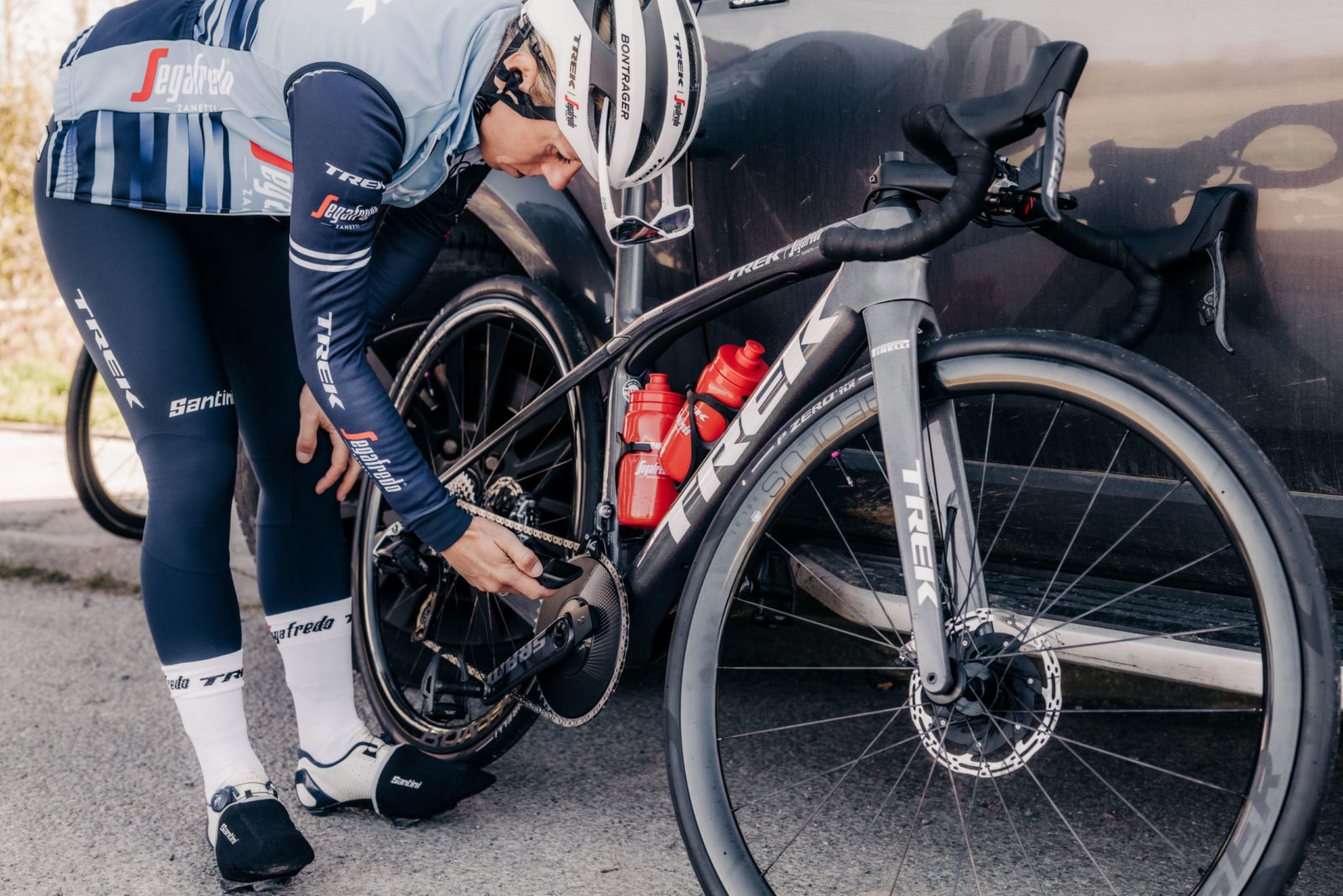 On race days, riders and mechanics will make last-minute decisions depending on the weather or any course changes. For example, if bad crosswinds are expected, the team might switch to wheels with shallower rim depth so that the bike has less surface area to be pushed around, even though deeper wheels are more aerodynamic in most settings.

“The fastest wheel is the one that you can control and keep in a straight line,” Shriver says. “If you have a super deep pair of wheels, that’s great, but if you can’t control it then it doesn’t matter.” 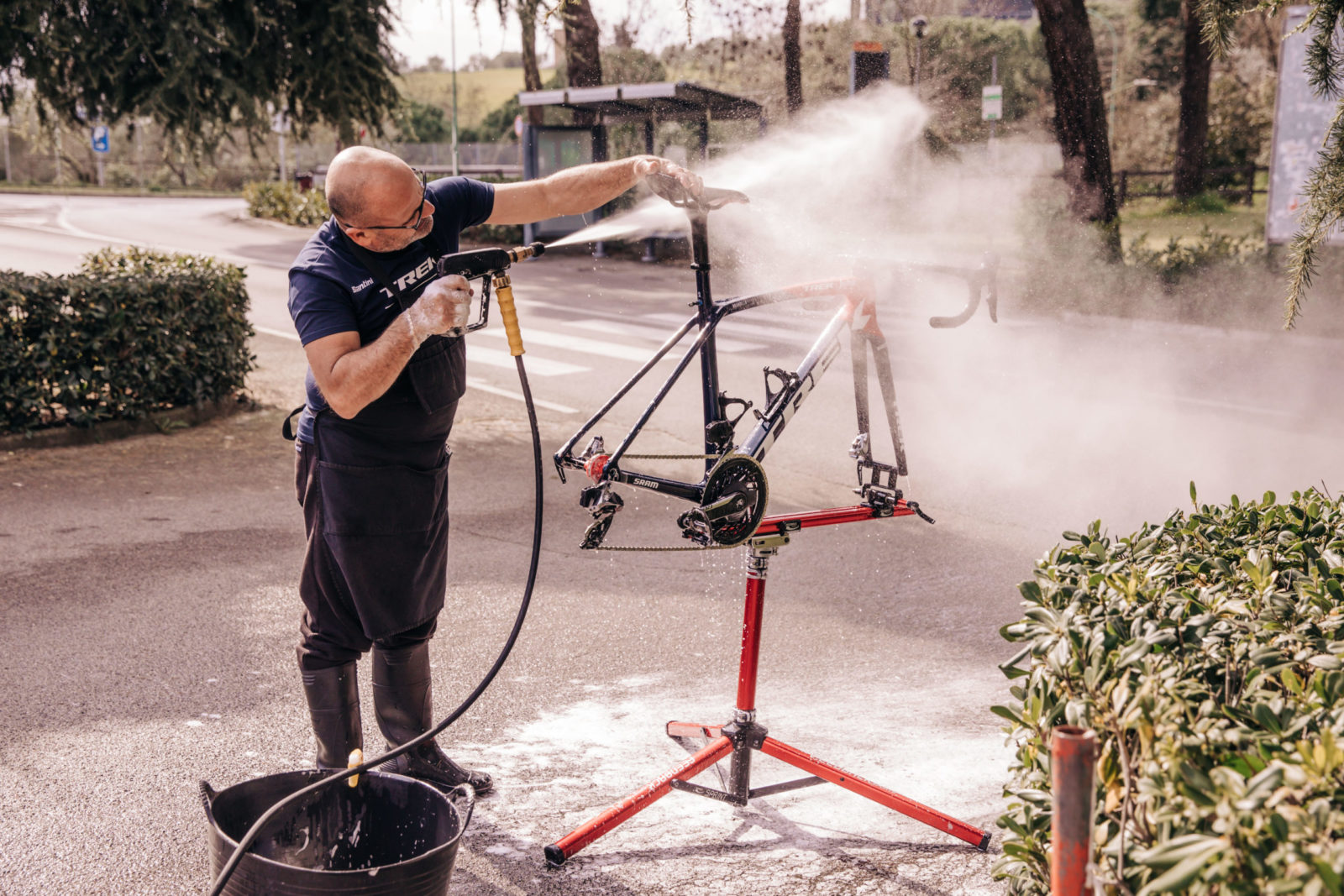 Shriver shared the specifications for the bikes that Lizzie Deignan, UCI’s top-ranked rider in 2020, will be riding at Tour of Flanders, Paris-Roubaix and Liege-Bastogne-Liege in 2021. The bikes were similar, but with a few key differences depending on the race that we highlighted below.

Flanders has cobbles too, but Paris-Roubaix’s are particularly mean, and thus necessitate a more stable bike. Lizzie is riding a 54-centimeter frame for Paris-Roubaix because that’s the smallest size offered in the Pro Endurance geometry.

The wheels may not change depending on the parcours, but the rim depth might if, say, crosswinds are expected. On a regular day, however, Lizzie will ride wheels with 37-millimeter depth. 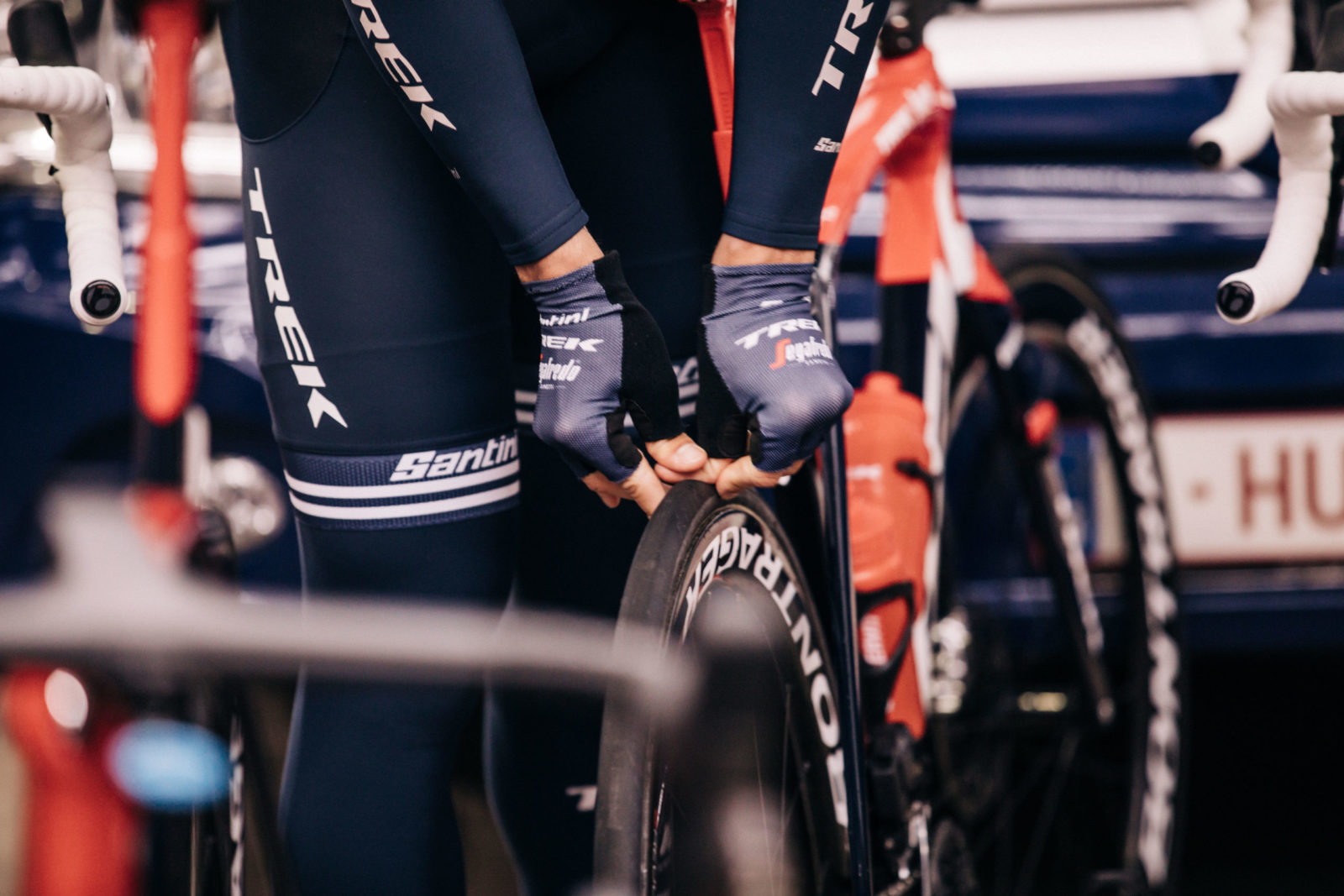 Three different tyre widths for three very different stages. Flanders features cobbles like Paris-Roubaix and a fair amount of climbing like Liege-Bastogne-Liege, so its tyres split the difference in width.

If you want to know Lizzie’s tyre pressure, that’s classified.

Because Paris-Roubaix is relatively flat, Lizzie can get away with just one chain ring. Much simpler that way.

Though the chain ring may change across the classics, the cassette range doesn’t.