The French climber takes a dramatic victory from a select group in the mountainous second stage.

In a nail-biting finish, Julien Bernard came from behind and sprinted to glory on the mountainous 29.5km second stage of the Virtual Tour de France.

The 28-year-old Frenchman rode strongly on the main difficulty of the day, a cat-2 climb, which boasted 600 meters in elevation, and found himself in a chase group alongside teammates Giulio Ciccone and Niklas Eg, a few seconds off the front.

“My strategy coming into the race was more or less what I use in all my previous Zwift races: one minute with intense power to try to stay at the front of the bunch. In e-racing, it’s really important to start super fast. Then there was a small bunch, and I could stay tucked in there and save my legs for the climb. I tried to start the climb in a good position and then paced myself. On the summit, I was in a second group, but I was not stressed. There were only four guys in front, and I knew that it would be possible to catch them on the downhill, and this is what happened,” said the Frenchman. 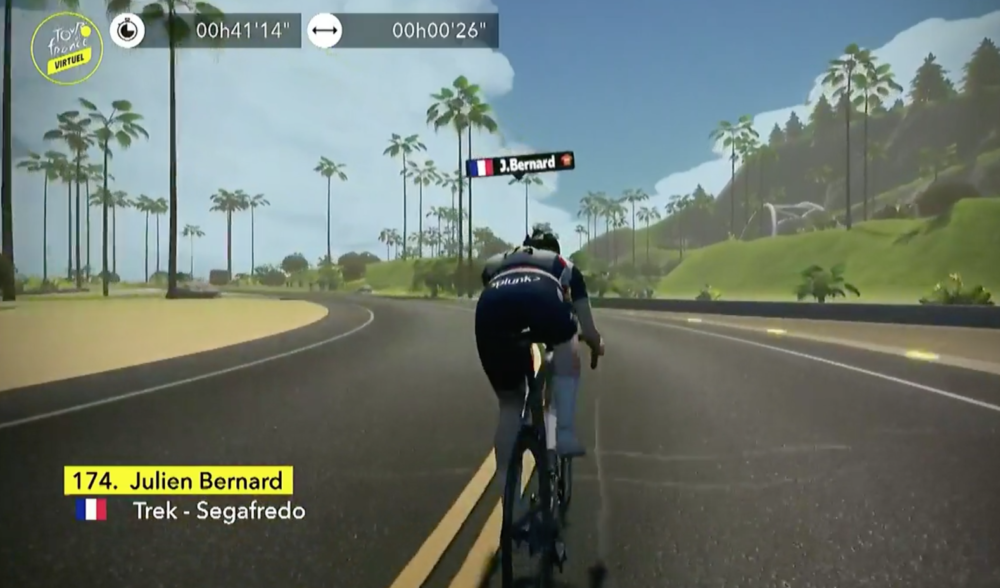 I’m very proud because this is a Tour de France stage, even if it’s virtual, I’m very happy to have won and also for Trek-Segafredo. 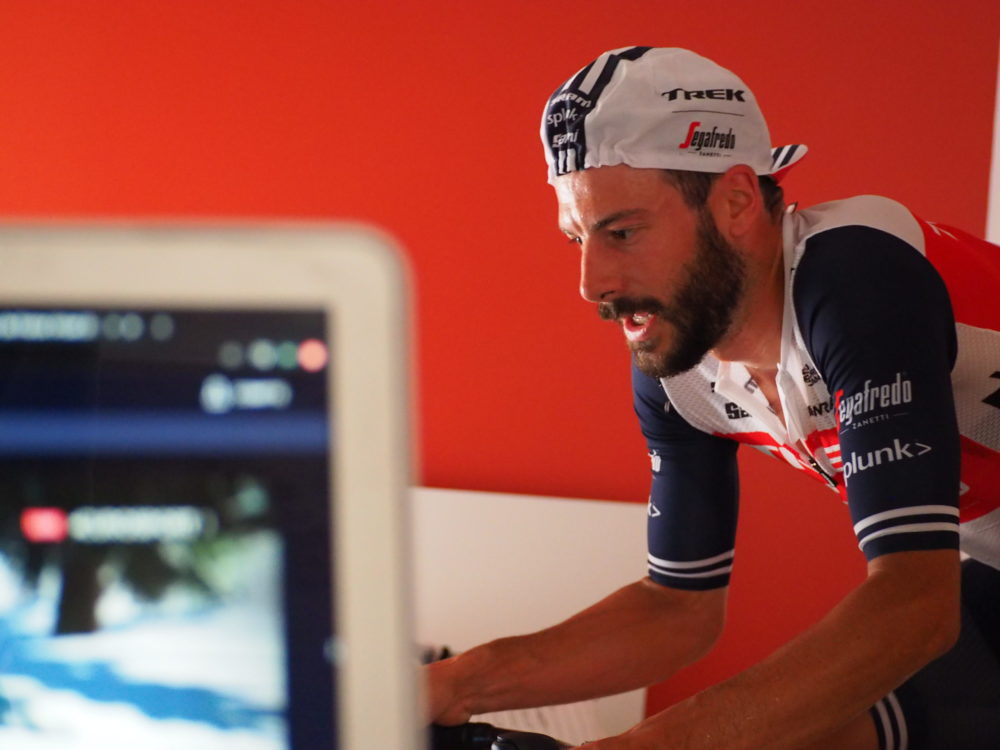 After the descent, Bernard was able to close the gap to the leaders and soon afterward launched an attack dragging compatriot Guillaume Martin (Cofidis) with him. The duo was swiftly reabsorbed, but the damage was done, and only 15 riders remained at the fore.

“I tried to attack because I was slightly afraid the group behind would catch us as there was no cooperation at the front group of 15 riders. But I was unsuccessful. Then I waited for the final sprint in the bunch,” continued Bernard

Paddy Bevin (CCC) launched a late attack in the flat run-in to the finish, but the Kiwi was overhauled by a flying Bernard who calculated his sprint to perfection to win by three-hundredths of a second in a nail-biting finale. 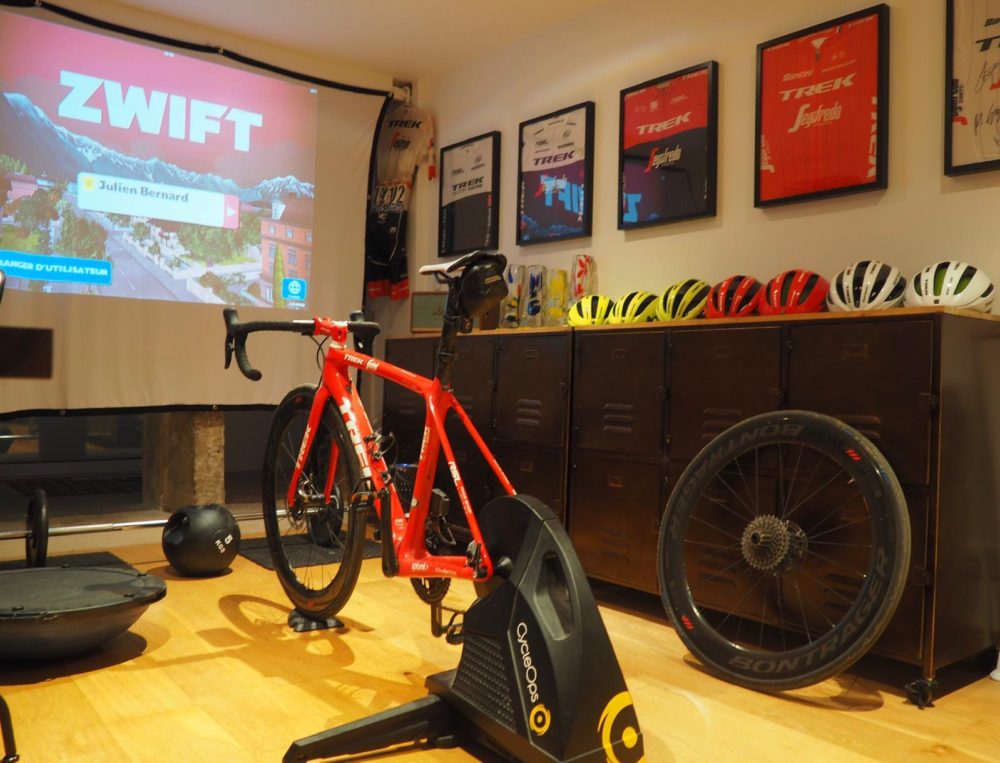 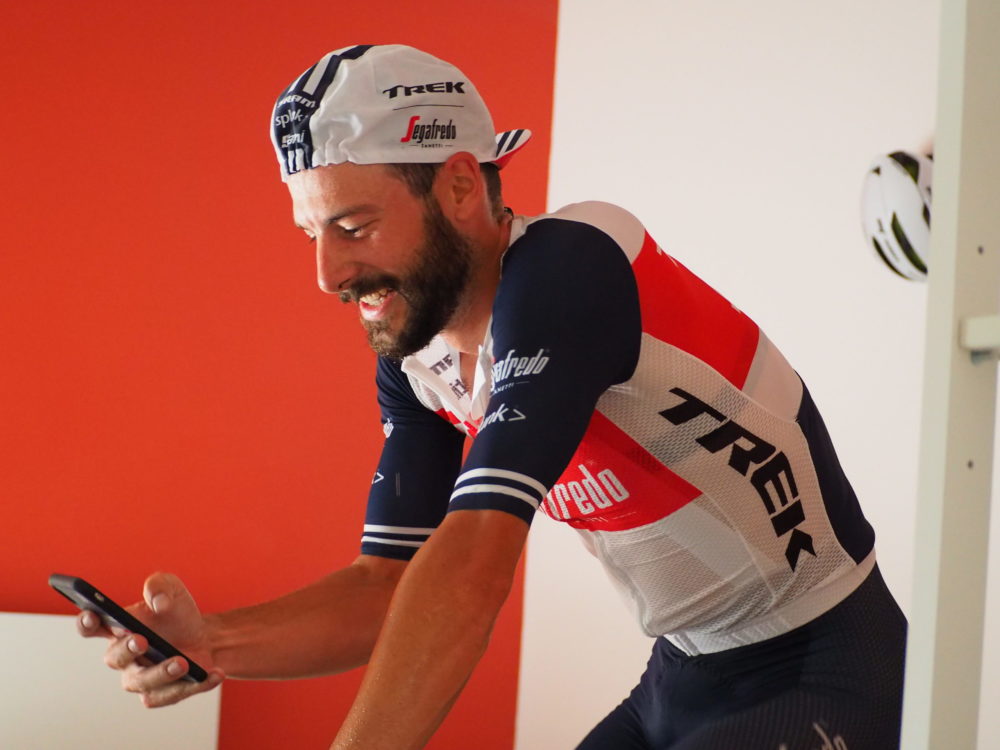 “I started the sprint a bit too late, but I think this was a good thing because I think some of the other guys lost some steam in the last 100m. I’m very proud because this is a Tour de France stage, even if it’s virtual, I’m very happy to have won and also for Trek-Segafredo. We worked very well during this lockdown period, and now we are ready for the real racing to start,” concluded Bernard who, back in February before the racing suspended, won his first victory as a pro at the Tour of the Alpes-Maritimes and Var.

In a strong collective performance, Ciccone concluded the stage in 7th position and Eg just outside the top-10.

With this result, Trek-Segafredo moves up to 4th place in the General Classification, still being led by NTT.

The Virtual Tour de France continues next weekend with Stages 3 and 4.  More info on the races and our lineups can be found here.