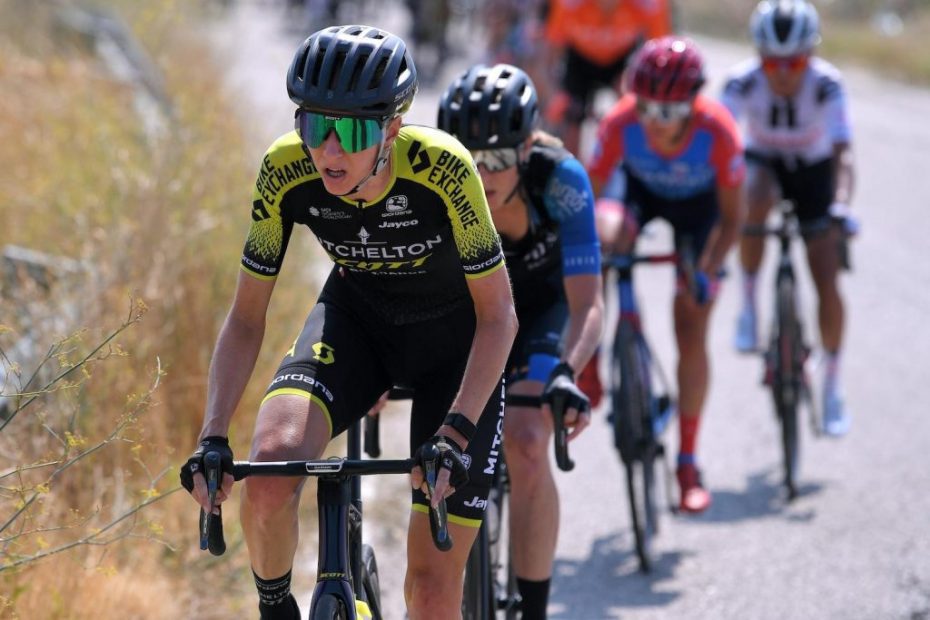 Two-time Herald Sun Tour champion Lucy Kennedy made it into the breakaway for the second day in-a-row as the Giro Rosa concluded in Motta Montecorvino.

The Durango-Durgano winner made it into a large breakaway group that were allowed to stay away until the finish, but a crash amongst the attackers on the final descent ended Kennedy’s hopes of a win.

Big Break
The peloton began climbing from the gun and it wasn’t long before the first attacks were launched. After a number of failed attempts, a lone rider eventually forged clear with a large chasing group then breaking away from the main bunch as the race headed towards the end of lap one.

Kennedy managed to infiltrate the move and the group soon absorbed the solo leader to create a leading group of 27 riders with a gap of 1’30” at 80km to go. The group then split on the decent, with 9 riders edging away, but they were closed down by the time the race reached the finish line for the second time.

Several small groups were attempting to bridge across to the leading pack, with the gap back to the peloton up to 4’50” over the top of the climb. The advantage over the bunch continued to hold steady, with the maglia rosa and other general classification contenders seemingly content to let the group stay away.

Hopes Ended
The leading group was down to 10 riders as they headed onto the final lap, with Kennedy still in the mix. However, the Clasica San Sebastian winner’s chances of contesting for the win were dashed on the descent when she was held up by a crash in front of her.

The 32-year-old tried to chase back on, but it was too late as riders began to attack each other up the final climb towards the finish line. Kennedy eventually rolled across the line in 14th place to end a Giro Rosa of mixed emotions for Mitchelton-SCOTT.

Lucy Kennedy:
“Another day, another breakaway. It’s not a result, but I’m pretty shattered, it was another really, really hard day and I felt pretty terrible right from the start.

“Then I was actually getting better as the race went on, but I got distanced a bit on the final descent and was caught behind the crash, and I couldn’t claw my way back unfortunately.”

Alejandro Gonzales-Tablas:
“The plan was to be in the breakaway, we knew that the breakaway could make it to the finish today and Lucy was there. But unfortunately there was a crash on the descent and she was on the back of the group, so yeah it was her fault, but it was also a race situation.

“The girls have ridden fantastic in the last two stages after we lost Annemiek and Spratty, so I think we have nothing to regret. We tried to get another stage win, it couldn’t happen, but we’ll be back.”