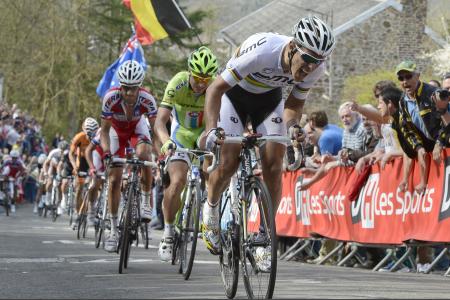 La Fleche Wallonne is one of the key Ardennes Classics taking place in Belgium each year. The finale takes place on a circuit with two warmup climbs before the finish on the Mur de Huy which produces some fantastic finishes as the world’s best battle it out to time their attacks on the hill to perfection. Many of the best cyclists have won here, such as Kubler, Poulidor, Merckx, Zoetemelk, Moser, Hinault, Fignon, Criquielion and Jalabert. A testament to the quality of the race.

Alejandro Valverde is the obvious favourite for this race being the only double winner in the field, with one of those being last year. He has been there or thereabouts this year but may have returned to his habit of finishing on the podium (e.g. Strade Bianche).
Joaquim Rodriguez won Fleche Wallonne in 2012 and is always a threat on this sort of hilly finish. He won the overall in the Tour of the Basque Country two weeks ago so is clearly in great form going into this race.

Philippe Gilbert won here in his spectacular year of 2011, he’s not quite in the same form but a dig at the finish of Amstel Gold last weekend shows his ambition.
Dan Martin favours this type of race and has come close in recent years with a 2nd and a 4th.
World Champion Michal Kwiatkowski won Amstel Gold with a great sprint finish last weekend and just missed out on Paris-Nice, it wouldn’t be hard to see him repeat that performance on Wednesday as the form rider.
Bauke Mollema finished 4th in this race last year and came 2nd overall in this year’s Tirreno – Adriatico. 55th in last weekend’s Amstel Gold may be a bad sign however.
Former world champion Rui Costa doesn’t have a good previous result to bank on here but is the sort of punchy climber who stands a chance at the final of Fleche Wallonne. His 4th place in Amstel Gold shows he has the form to be a contender.

There is an interesting Tour de France warm-up aspect to Fleche Wallonne with Nairo Quintana, Vicenzo Nibali and Chris Froome all lining up. They may contend for the win or they may be jokers in the pack attacking early on the final climb to assist others.

Then there’s the rest – either super domestiques or team leaders. Carlos Betancur did well in 2013 but hasn’t pushed on quite as much as we thought he could after a dodgy 2014. Sky’s Sergio Henao was 2nd in 2013 but also had an underwhelming 2014 and questions over blood values. Dani Moreno won here in 2013 but his role is never quite clear with Rodriguez racing, he’s a great plan B. The Dutch pair of Tom-Jelle Slagter and Wilco Kelderman can do well with Slagter finishing 5th last year and Kelderman in good form this year. The oldest man in the race, Rinaldo Nocentini often does well on an uphill finish such as the Muur de Huy. Former Olympic champion Samuel Sanchez has three top-ten finishes at Fleche Wallonne and will work closely with Gilbert. And finally, Rafal Majka will be doing a rare one-day race, it will be interesting to see if he makes an appearance on the Muur de Huy.

Julian Arredondo is a decent climber who won the King of the Mountains jersey in last year’s Giro, he also finished just outside the top ten in the 2014 running of Fleche Wallonne so we know he can be there at the finish. He won’t receive much attention going into the race but is a decent shout for a top ten.
Simon Yates came 5th overall a couple of weeks back in the Tour of the Basque Country so is clearly in some hill climbing form. Greenedge may let him loose off the leash for this one and we can see him claim a top 15 place.
Tim Wellens is one of those quiet GC riders, where you don’t really see them but almost silently they appear in the top ten. He’s only 23 but scored a top 10 position overall at Paris – Nice this year