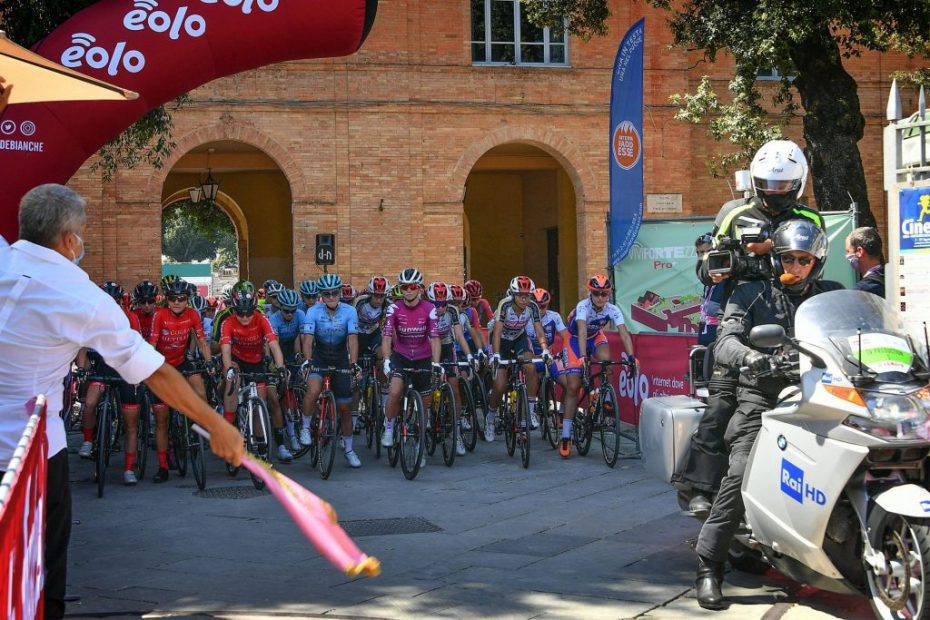 Women’s WorldTour racing returned today at Strade Bianche, the race known for combining short and steep climbs with several sections of testing gravel roads. With its new place on the calendar for this year’s revamped season, riders would also have to deal with searingly hot conditions as temperatures sky-rocketed above 35 degrees celsius.

The racing was on from the start as attacks flew and a fierce pace was set on the gravel sections. It soon became a race of attrition as riders struggled in the heat and dropped out the back of the bunch one-by-one. A mid-race lull in pace saw a reduced peloton together with 50 kilometres to go but an untimely mechanical for Liane Lippert saw her drop back just as attacks were made at the front.

A strong group of 11 riders from 11 different teams broke clear and quickly built up a one-minute advantage, before a counter-attack saw one rider go clear, increasing their gap even further. Coryn Rivera and Leah Kirchmann rode strongly to bring Lippert back to the remnants of the peloton, and alongside an incredibly hard-working Franziska Koch, managed to keep the gap to the second group on the road within contact.

Entering the final 20 kilometres attacks flew from the bunch and the chasers, leaving riders in small groups all over the road. Lippert kept her head down, continuing to work hard and set her own tempo all the way to the finish line in Siena, where she crossed the line for a hard-fought 16th place – a result that sees her maintain her lead atop the UCI Women’s WorldTour standings.