Lorena Wiebes sprints to victory in Harlow on Stage Two 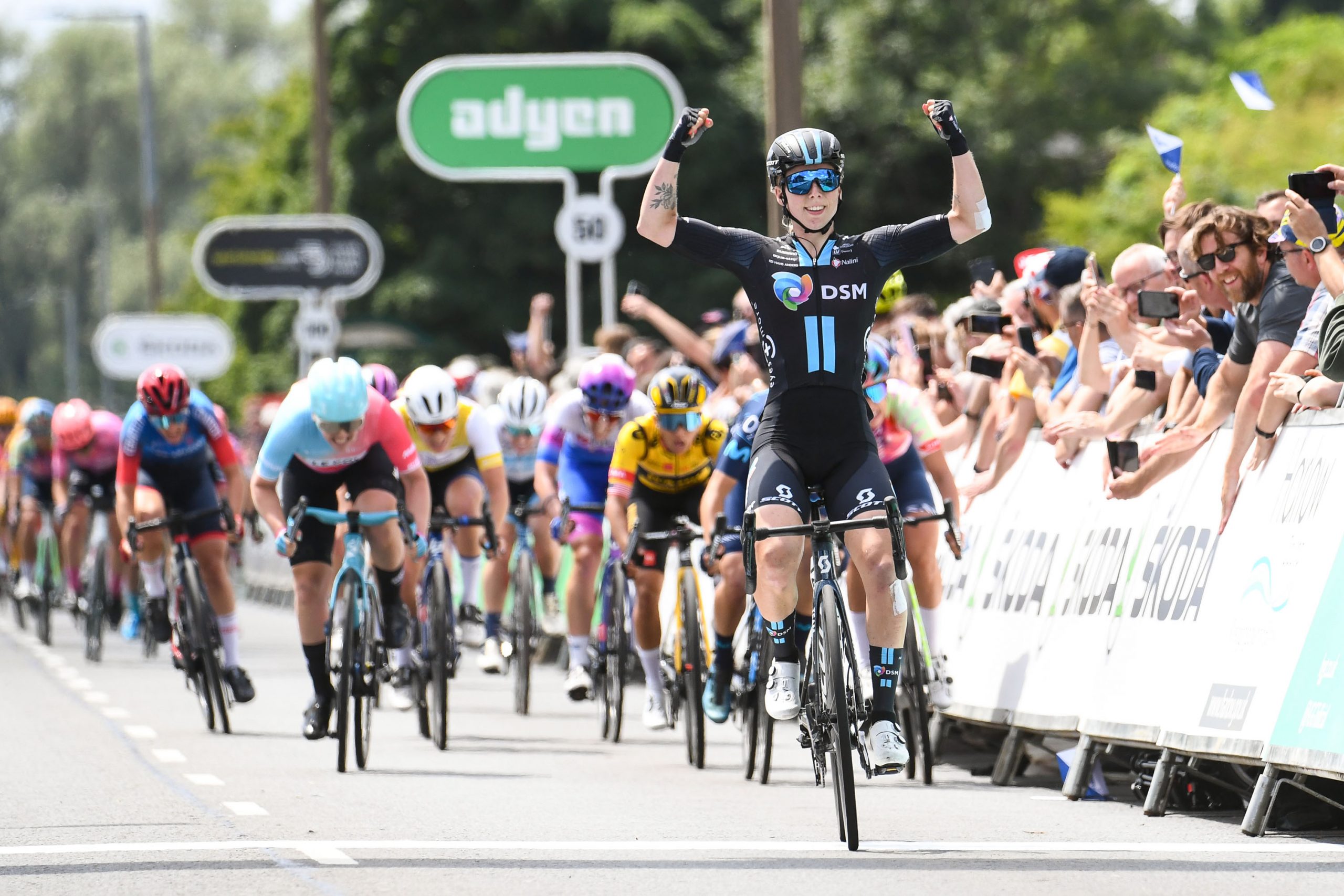 After yesterday’s mishap, the pre-stage favourite Lorena Wiebes flew to a sprint victory today in Harlow.

Wiebes won back-to-back stages of last year’s race and will have an opportunity to repeat that again tomorrow on Stage 3. Team DSM launched a successful lead-out that gave Wiebes the perfect positioning ahead of all of her rivals. When she kicked on, no-one else had an answer. Behind her, Barbara Guarischi just beat Shari Bossuyt for second place at the finish line.

Yesterday’s winner Clara Copponi picked up plenty of bonus seconds today in a battle with Maike van der Duin of Le Col-Wahoo. Those ensured that Copponi ended Stage 2 still in the leader’s jersey. Lorena Wiebes has jumped to 3rd place overall with the 10 seconds she earned by winning today’s stage.

“Today was not a really hard stage and there was quite a good speed in the bunch,” explained a smiling Wiebes at the finish. “We had no problems today, we were good together in the front at the intermediate sprints and over the [ŠKODA] QOMs. At six kilometres to go there was a crash and only Franzi [Koch] and I were in the small peloton after it but luckily Megan [Jastrab] and Charlotte [Kool] came back.

“We were a bit stuck in the middle of the road before the sprint so I found my own way out a bit and in the last straight the girls found me again and we did a really nice lead out; they set me up perfectly. We can be super proud of ourselves and we’re looking forward to the next stages now.”

In addition to the overall lead, Clara Copponi keeps the Breast Cancer Now Points jersey with a five-point lead over Wiebes, while Christine Majerus (Team SDWorx) continues to hold the ŠKODA Queen of the Mountains jersey, though now with just a single point advantage over Gladys Verhulst (Le Col – Wahoo).

Verhulst and Lily Williams (Human Powered Health) had gone clear with just under 19 kilometres remaining as the race approached the final categorised climb at Stonnards Hill, before being caught with 2.5 kilometres out from Harlow to set up the fast finish on Third Avenue. Verhulst took both of the QoM points as a result.

The only other significant action of the day had seen Sammie Stuart (CAMS – Basso) make a solo move that at one stage saw her gain over a minutes advantage, the second day running that the British team took the Adyen Combativity Award having been the only squad to show significant interest in attacking.

“I didn’t expect it to pan out like that really. I’m mega happy winning that award today. It was hot out there, so it was very hard, and I was certainly on my own out there because my comms had broken as well so I had no information coming in – all I had was the board each time the motorbike came past. It was difficult but enjoyable.

“We have come here to see what we can do, and I think we are proving ourselves as a team. Dani [Shrosbree] won the award yesterday, I’ve won it today, so I think we have put CAM – Basso up there with the rest of the teams.”

Stage three takes place in Gloucestershire, covering 107.9 kilometres (67.1 miles) from Tewkesbury to Gloucester, via the Forest of Dean.  The stage is expected to finish alongside the historic Gloucester Docks at approximately 2.05pm, with coverage on Eurosport Player and the GCN+ app from 12.30pm.