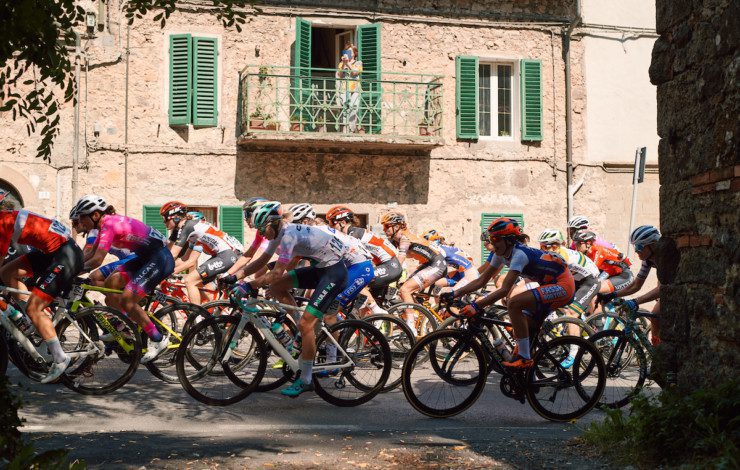 The Giro Rosa’s 110.3km long fifth stage around Terracina was flat for the first 50km, with a 15km second category climb midway through the route at Itri, featuring a 4 per cent gradient and an additional unclassified ascent only 25km from the finish with a slope of 6.5 per cent. Although touted as a stage that could see a sprinter take the win, this was by no means a foregone conclusion. During the early stages of the race, several riders attempted to break away, but their efforts remained in vain. CCC-Liv drove a hard tempo to make the stage incredibly difficult for the fast women in the peloton, with the sprinters ultimately unable to keep up with the pace, and being dropped on the ascents. In Terracina, the stage was taken by Vos in a sprint, with Mikayla Harvey and Elise Chabbey, both currently in the top 10 in the overall standings, crossing the line as part of the first group, and therefore not conceding any time. Mikayla also retains the white jersey for the best young rider.

As Team Owner Thomas Campana explains, “This was a sprinters’ stage, but CCC-Liv made the race tough on the climbs, so the sprinters had to fall back. The main goal of the team was to conserve the good positions of Mikayla Harvey and Elise Chabbey in the general classification, and our strategy was successful. The team put in significant effort towards the end, where there were a couple of leading groups over the final 15km which were eventually brought back. The team can look back on this stage as a transition stage, in the knowledge that we maintained our fifth and tenth places in the overall standings.“