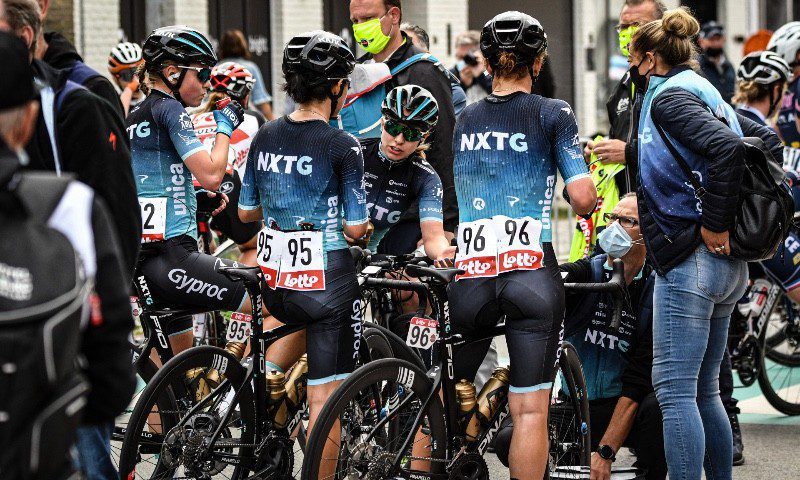 NXTG Racing, the Dutch U23 development team, will be known as NXTG by Experza in 2022. The team has received additional funding from the Experza recruitment agency. Quickstep’s owner Patrick Lefevere is a part-owner of the agency. It’s a return to women’s cycling for Lefevere who had links to the Expera-Footlogix team in 2018 before they disbanded at the end of that year.

Patrick Lefevere has been met with ire after recent newspaper column comments, with Lizzie Deignan quoted as saying “I’m pleased that he has no interest in women’s cycling”. This week, former Quickstep team sponsor Deceuninck confirmed they were moving to Alpecin-Fenix & Plantur-Pura from 2022. In their press release, they were open in saying that women’s cycling was an area they wanted to invest in but said they couldn’t tempt Lefevere to invest in that area. That makes today’s announcement all the more surprising.

NXTG Racing was originally created in 2019 by Natascha Knaven-den Ouden, with a focus on developing young riders. With no Under 23 calendar in women’s cycling, the team helps provide a launching pad between juniors and the elites. They do this with a high-level race calendar, they are regularly seen at big Belgian and Dutch races, and an increased level of professional training. The team have done well with their recruitment, with riders like Shari Bossuyt and Charlotte Kool moving up to Women’s WorldTour teams in 2022. From a British point of view, they had riders like Emily Wadsworth and Amelia Sharpe in their ranks.

The team will be known as NXTG by Experza in 2022, reflecting their new sponsor’s involvement. Patrick Lefevere says in an article on CyclingTips, that the focus is on developing the team and helping to make the pool of quality riders in the women’s peloton bigger.

“As the most winning men’s team of the world, we would like to become a winning team in women’s cycling as well in the long term. I thought a lot about buying myself into an existing team but it didn’t feel right. That’s why we do it the other way around. I don’t see it short term. We have long-term contracts with all of our current suppliers. We now have to choose the right time to step in but we also have to think about the budget,” Lefevere explains.

With NXTG also having its own Talent Development Team in place, there’s a clear pathway from junior talent to being able to take part in WorldTour races. Charlotte Kool showed last season that you can be a contender for wins at NXTG as well. Former-pro Jolien d’Hoore also joins the team as DS in 2022. She’ll be able to impart some of her experience from years of riding in the pro peloton to the young riders on NXTG by Experza.

“We are very happy that we can continue to grow as a team with Experza by our side, it is a company that has its feet firmly on the ground, but also shows a lot of ambition. At NXTG we are certainly ambitious but also realistic. For example, the step from the juniors at our own NXTG U19 development team to the elite is still huge for the women. There are very few who take that step without help. We are proud that Experza will help us give those girls a stage to grow further and make the most of their talents both on and off the bike.”