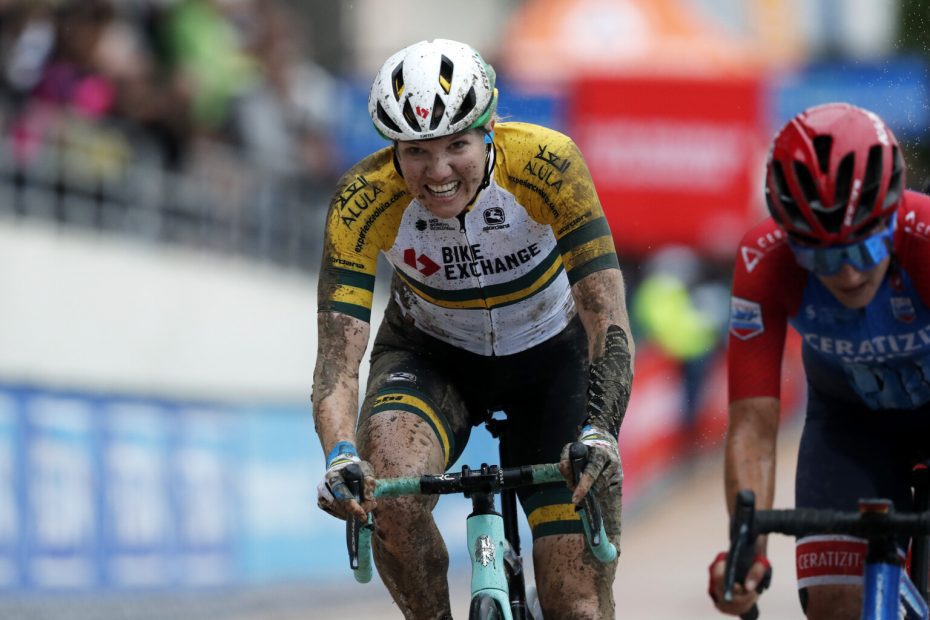 Australian champion Sarah Roy enjoyed the first ever edition of Paris-Roubaix Femmes today, making it to the velodrome in Roubaix covered in mud from head to toe, despite crashing hard on one of the final cobble sectors, before sprinting to a very well fought 23rd place for Team BikeExchange.

The 116km race saw numerous crashes on the wet and muddy cobblestones, with Lizzie Deignan taking the field by surprise, dominating the race after launching an attack on the very first cobble. The British rider successfully held off the chasers and made it to the velodrome to cross the line as the first ever winner, with a gap of 1 minute 17 seconds over second place Marianne Vos.

Sarah Roy
“They say everyone who rides Roubaix has a story. I had really good legs out there and it was just down to luck. I was positioned well into the sector in the chasing group, maybe around sixth wheel, but then someone just crashed in front of me, and I just came down. It was so slippery, there was so much mud out there and you couldn’t react.

I finished on the back of the chase group there in the end but I could have just stopped right then after the crash and got in the car, my body was hurting but I really wanted to to keep going and finish. I am very happy to finish, it is special.

It is one of those races you just want to nail, so I would like to come back next year and now we all know it better.”

Alejandro Gonzales-Tablas – Sport Director
“It was as expected, it was carnage. The luck was not on our side today, the legs were good for the riders but we had bad luck with crashes and problems, but with the weather we had today it was to be expected. ”