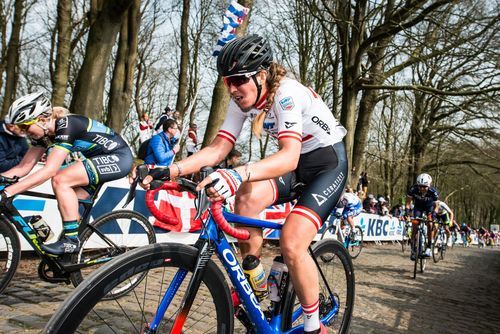 Former Austrian road race champion, Sarah Rijkes and 27-year-old Dutch rider Claudia Koster will remain with the team for 2020 as they each sign a one-year deal.

28-year-old Rijkes who resides in Belgium played a vital part in the team’s results this season, most notably, the Lotto Thüringen Ladies Tour, Gent-Wevelgem and Driedaagse De-Panne as a loyal domestique.

“I really loved sacrificing myself for the team, because you only can win as a team and I am really proud about the way we raced as a team and won as a team from the start to the end of the season.”

“As I look into next season my goal is to help us continue the success and the spirit like we had this year. The spring classics are a big target for me, they’re the races I enjoy the most, and I’d love to win back “my” Austrian champions jersey.” says Sarah with a hint of laughter but pure motivation in her voice. “For me the most important thing is that I love the way we are racing as a team and we always have each other’s backs, it was the reason I re-signed with the team.”

Claudia Koster who had multiple top 10 results in the Tour de Bretagne Feminin CERATIZIT as well as a 2nd place on stage 1 of the BeNe Ladies Tour suffered a year with ups and downs from multiple bad crashes.

“The season started great with nice results in February in Valencia and two important wins from Kirsten in Driedaagse Brugge-De Panne and Gent Wevelgem. Every race we really worked as a team.”

“However, my absolute highlight of the season was the first stage of the BeNe Ladies Tour. I have had some setbacks due to a crash in Gent Wevelgem suffering a wrist injury and later in Bretagne where I broke my collarbone on the final stage. After both crashes, I kept training really hard on my Wahoo Kickr and maintained the focus on the races. By doing this I managed to get back in competition even stronger, which resulted in a 2nd place in the BeNe Ladies Tour on the first stage! I dreamed of the victory, but a podium was a nice feeling.”

“Overall excluding the injuries, I made a lot of progress this year, and became a stronger and more complete rider, having learnt so much from the team and riders. I am therefore looking forward to continuing with this in the upcoming year with WNT ROTOR, it’s the perfect environment for me to continue to develop as a rider as well as contribute to achieving the team goals. I really feel at home here. With the team we have currently, you know beautiful things can happen. It’s very good to be part of it. I’m really motivated to get the best out of it in 2020.”

“At this moment it is hard to set goals for 2020, as I am still recovering from a concussion and whiplash after the car accident that we had during the TTT recon with the team in Vårgårda, Sweden, but with our sports director Dirk Baldinger we are taking it step by step.”