Rally Cycling meant business on stage 2 of the Digital Swiss 5 on Thursday. Led by former Canadian road champ Matteo Dal-Cin in fifth, the team stacked the leaderboard at the end of the 45 km stage that was hosted on Rouvy’s virtual platform. 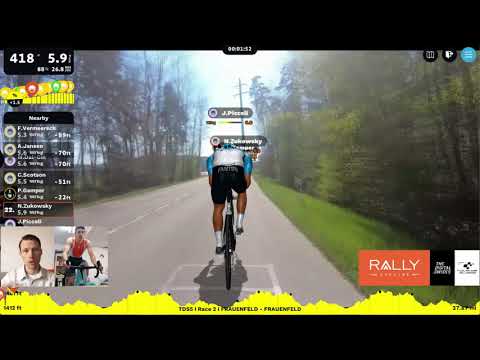 “It was really cool to be that close to guys who are world-class,” said an exhausted Dal-Cin. “It was more than I expected and I’m stoked with it.”

Dal-Cin, who set a personal record of 428 watts over the 56 min course, had added motivation to push all the way to the finish line as teammate Bassett was closing fast.

“I had to dig pretty deep in the final few kilometers to hang on,” said Dal-Cin. “Knowing Stephen was closing on me was more motivating than anything since we know each other so well. It was a lot of fun. I’m glad we were able to make a show of it because I think a lot of people are missing the competition.”

The team hasn’t raced for nearly two months but that hasn’t slowed them down or affected their motivation.

“The team’s performance shows we took the event seriously and were ready to compete against the WorldTour teams,” said Bassett. “I was really pushing to catch Matteo at the end. He was way in front of me at the start but I raced myself through the field. Of course, I hoped to take the crown as the top Rally rider in the race but I’m happy we both had good races against some solid competition.”

Friday’s stage 3 sends the peloton into the mountains for a 33 km journey and an uphill finish in Disentis-Sedrun. You can watch the live broadcast from the team’s Facebook page starting at 10:05 am CDT.

In case you missed Gavin Mannion’s impressive 15th place performance from stage 1, you can watch the race replay here.