9 Things We Learned from the 2017 Tour de France 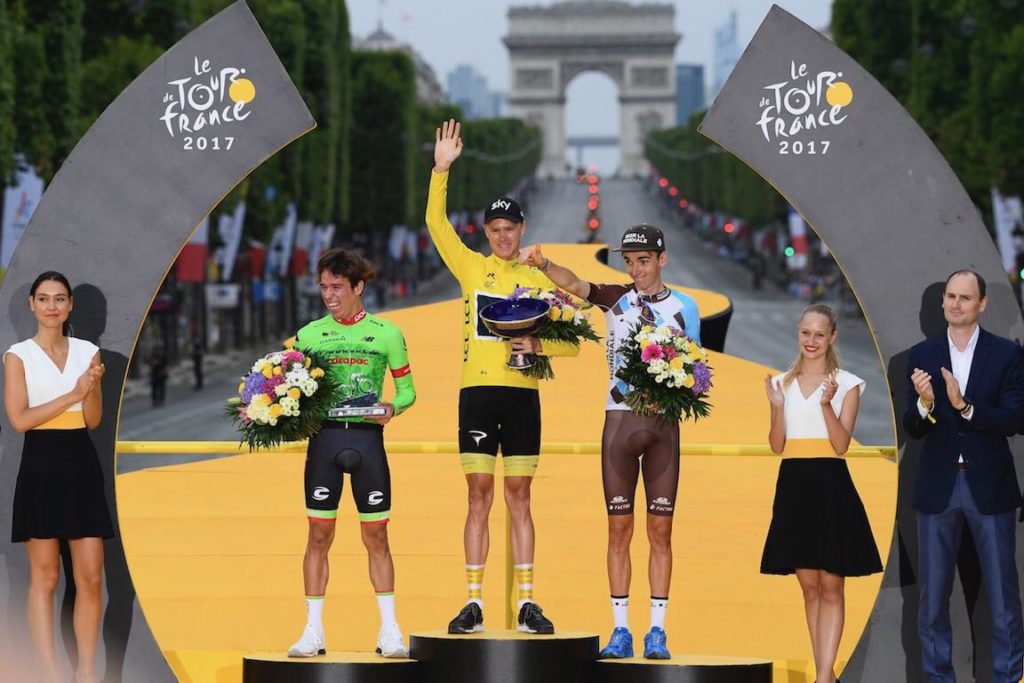 Another year, another Tour de France is in the books. Chris Froome secured his 4th victory, Michael Matthews netted his first Green Jersey, Warren Barguil successfully got the Polka Dots and Simon Yates matched his brother Adam in getting a White Jersey.

Across the 3 weeks of the race, we learned a few things – some serious, some less so.

Nairo Quintana was never really at the races in this year’s Tour de France. He lost 36 seconds to Froome on the rainy Stage 1, 14 more on the first hills on Stage 5 and 1 minute 19 seconds on Stage 9. After this he began almost a non-entity, slipping back as the going got tough. He did launch a couple of attacks, but there was little to nothing to redeem his Tour de France bar a 2nd place in Foix. An overall position of 12th in Paris his worst showing in a Grand Tour since his first in 2012.

The lesson learned here is that doing 4 Grand Tours in a row, is probably too many for a rider looking to win the general classification.

2 – Froome probably doesn’t need a TT to win, but it helps

It’s been awhile, but Chris Froome managed to win this year’s Tour without winning a stage. Oscar Pereiro was the last person to manage this in 2006. Team Sky have been continually bashed over the years for racing in a boring fashion, setting up a train and then riding quick enough that no one can attack. Last year we saw Chris Froome dash off on descents, with that particular style and win stages on his own. It may be an indicator of less form than previous years, but we didn’t see that this year. A few attempts were made, however they didn’t seem to open up enough of a gap to make them stick.

Ultimately the 1 minute 14 seconds that Froome got over Uran whilst time-trialling made the difference.

3 – The race is less fun when everyone gets hurt

The casualty list from this year’s Tour de France felt huge. By Paris 31 riders had withdrawn, but some of those were particularly high-profile. From losing Valverde and Izagirre in the German rain, the procession of pain continued claiming the likes of Cavendish, Porte, Thomas, Demare, Majka, Fuglsang, Gilbert, Kittel and Pinot. Porte genuinely could have won this race without his crash, whilst the sprints and Green jersey battle changed massively with 3 of the best out of the race.

Kittel in particular was a tough loss as the stage was set for an all-out Champs Elysees showdown against Matthews to decide the winner of the Green jersey.

The conspiracy theorists had a field day with this year’s Tour de France. Starting with the expulsion of Peter Sagan for not keeping his elbows in, apparently so that Arnaud Demare would have a better chance of winning the Green jersey. Especially as Demare also chopped across another rider on his way to winning that particular stage.

We then moved onto the time penalties which were applied to Rigoberto Uran and George Bennett for taking supplies within the very last part of Stage 12, but French rider Romain Bardet managed to escape sanction despite doing the same thing. After some overnight protests, the penalties were begrudgingly reversed.

Even by the time we got to the final day the commissionaires managed to cause offence by overlooking Belgian Thomas de Gendt for the overall Combative Prize and awarding it to French rider Warren Barguil. Whilst Barguil managed to win stages and went polka dot points hunting, Thomas de Gendt spent the most kilometres riding in breakaways in this year’s Tour de France. He has a fair point to be aggrieved.

Whether or not there’s some reality in the theories, the way certain parts of the race were managed this year certainly managed to encourage people to think that way.

It seems to be everyone’s little factoid about Primosz Roglic that he used to be a skijumper. It appeared to be impossible to mention his name without adding the words ‘former skijumper’. It became one of those things that once heard, could not be unheard.

It used to be the same whenever Phil Liggett saw Sammy Sanchez, I now cannot think of his name without adding ‘former Olympic champion’ before his name due to the amount I heard it over the years during Liggett’s commentary. Since Alexander Vinokourov won in 2012 and retired almost straight afterwards, we should be spared this one until 2020 when Greg Van Avermaet will take up the mantle.

Even Eurosport presenter Jonathan Edwards got in on the act of mentioning Roglic’s skijumping past. I’m guessing it’s because it reminded him of his triple-jumping past somehow. Clearly there’s a link between jumping and cycling, must be the constant falling down.

I wrote about it as this year’s Tour de France started, but the French haven’t added another yellow jersey to the collection this year and Romain Bardet was unable to beat a Chris Froome not at the same level as his imperious best.

Once again, the polka dot jersey provided some reward for France. However King of the Mountains Warren Barguil has said he doesn’t particularly want to be a GC contender, preferring to have his own fun in a more relaxed way. All hopes for this generation seem to rest solely on Roman Bardet.

Bardet and Barguil won 3 stages between them and Arnaud Demare managed 1 before struggling. Lilian Calmejane provided entertainment with his breakaway attempts and also managed a stage win. Maybe a future as the next Thomas Voeckler awaits.

Talk of Lilian Calmejane leads nicely to the fact that the breakaway didn’t get much luck in 2017. Aside from his stage win, Stage 19th large breakaway was successful with Eddy Boasson Hagen deciding he didn’t want to sprint so blasted off on his own. Bauke Mollema also claimed a win for the breakaway on Stage 15 riding away from an elite group containing Tony Gallopin and Diego Ulissi.

Maciej Bodnar wins the prize for most achingly close breakaway attempt, being caught by the sprinters around 250 metres from the finish line. He would go on to win the final time trial in Marseille, so didn’t leave the Tour de France empty handed this year at least.

The most heartbreaking close finish however was that between Warren Barguil and Rigoberto Uran on Stage 9. Uran having had to ride the last few km stuck in his strongest gear, managed to power everything up to sneak over the line ahead. French TV had already declared Barguil the winner before seeing the photo and had even conducted a stage winner interview with him. The photo was released a minute or two later and Barguil held his head in his hands when told he’d actually lost.

With his first Tour de France stage win ‘taken off him’, Barguil went on to win 2 stages and the Polka Dots so soon found succour.

9 – Take things easy in the rain unless you’re Welsh

And finally, back to where it all began. In some ways we should have seen it coming, obviously a Welsh rider was going to win a time trial in a heavy downpour – in some ways an unfair advantage. The unluckiest rider in the peloton managed to stay upright in the rain and took his first yellow and green jerseys to go with his white ones from when he was young. He just needs a polka dot jersey to complete the set now.

In some ways it would have been nice for Tony Martin to get the win on German soil, but he seems to be making sure he misses out on early time trial stages by small margins. He now has 6 seconds in Dusseldorf to go with his 2015 2nd place by 5 seconds to Rohan Dennis.

Either way, it was a shame to see Geraint once again find trouble and crash out of a Grand Tour.