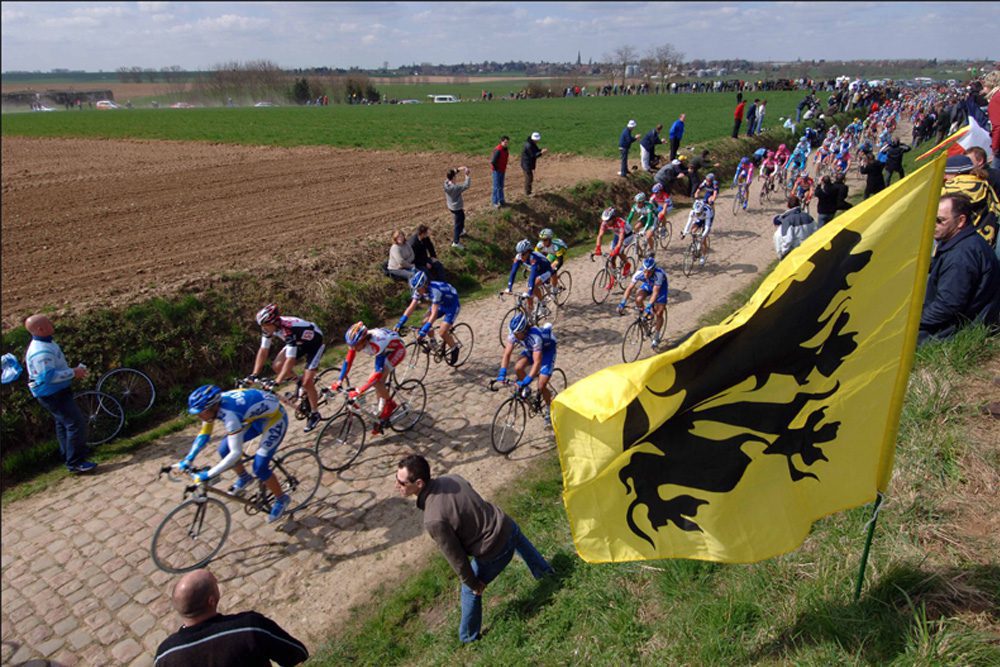 With today’s Tour de France Stage 4 going over some of the cobbles in Northern France – it’s time to regurgitate my interesting experience of Paris Roubaix in 2013. 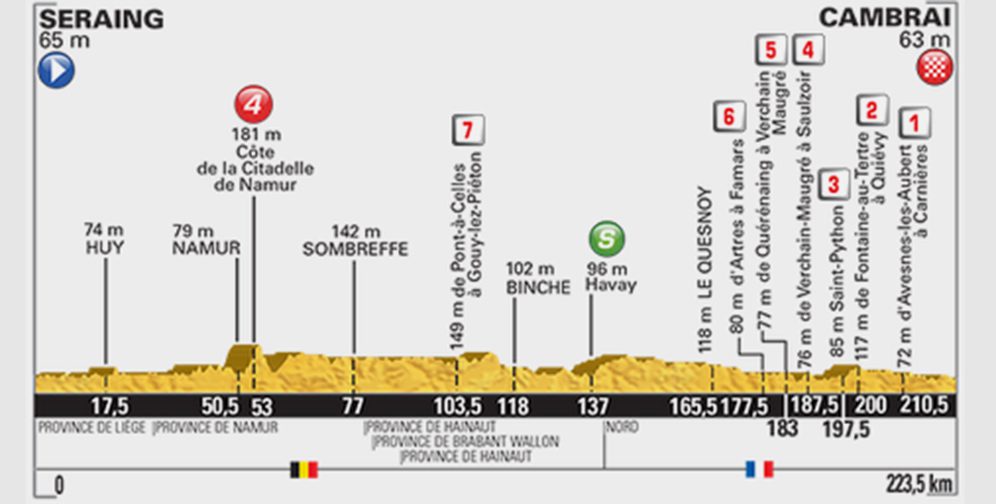 As you can see, one climb, and apart from the cobbles, a fairly easy stage. 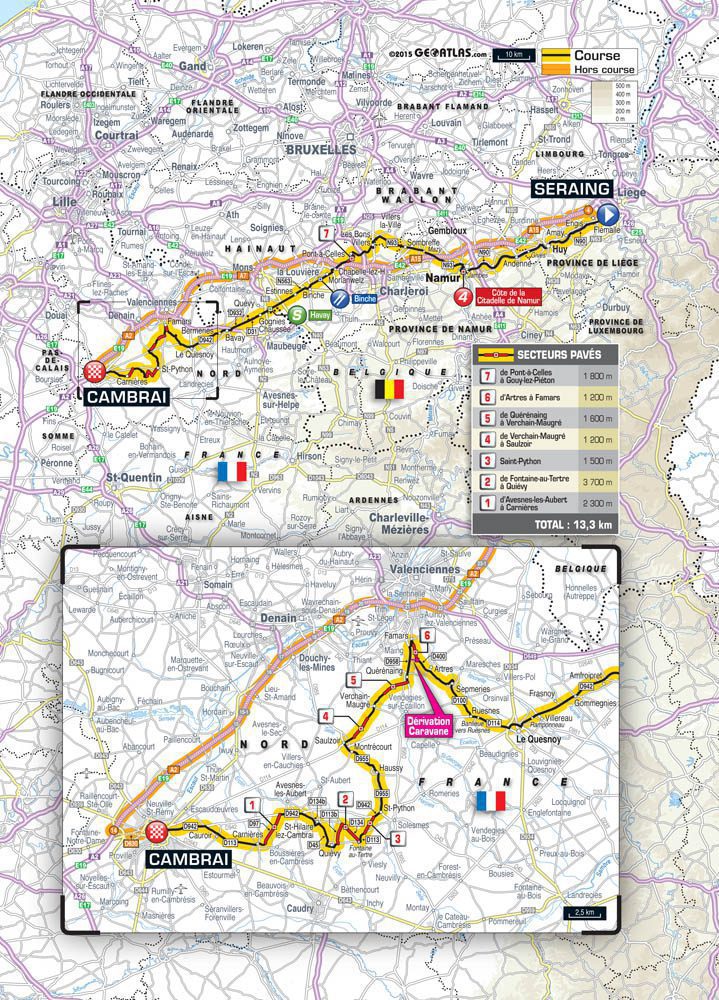 The start of the 2013 Paris Roubaix Challenge was a little underwhelming with small groups setting off whenever they wanted and no health and safety briefing that we Brits are used to at every sportive, a more French ‘if you’re doing it, get on with it, I don’t care’ attitude sufficed.

I was in a group with 4 other guys and we ended up tacked onto the back of a group doing an easy 18-20mph on the flat before we hit the first section of cobblestones after nearly 10 miles. I caught up and passed two randoms, dodged lots of bottles which at the first sign of bumps had escaped their cages. It was immediately obvious from this section that the Paris Roubaix cobbles were worse than the tamer ones in Norwich city centre.

The section crossed a main road halfway through and not wanting to get taken out by a car I tried to use my brakes – it turned out that the vibrations had completely wrecked the gripping muscle in my forearm, luckily as it turned out I didn’t need the brakes as Gendarmes were stopping the traffic anyway. I ended up finishing the 1.3 mile section 30 seconds quicker than the others. We all ran Strava which provides GPS tracking and then has various short segments where people race against each other for the best time.

We went quite quickly over the next few sections, which all just appeared from nowhere round a corner and were always a shock. A lot of the following sections merge into one after this point, which probably shows that I was beginning to tire and was zoning off inside myself and not thinking much. I do however, remember the Arenberg.

The Arenberg is the picture that most people have of the Paris – Roubaix race, it’s a 1.5 mile section, dead straight, through the forest and is rated 5-star difficulty (all the sections are rated by the organisers and only two are 5-star). We stopped and took a couple of pictures at the start which was probably unwise as we should have used the preceding downhill to build up speed to really attack it. I certainly found it hard to get up to speed whilst trying to clip in and avoid Sean Kelly doing a piece to a camera bike. I found the whole thing a struggle and could only really trundle along, it certainly got harder when I decided to do the ‘Geraint Thomas Paris Roubaix’ move of crashing there by bouncing off the cobbles to the right and getting my pedal caught in the metal railings set up for the race the next day.

I ended up going over the handlebars and was sat on the ground facing the way I’d come with my legs somehow unclipped and the bike on top of them. I did a quick sit rep and didn’t appear to be hurt, the phone in my back pocket was somehow unsmashed, so I got back up and rode to the finish.

Lots of people were regrouping after this important Paris-Roubaix secteur and about 10 seconds after setting off the side of my front wheel was smacked into by someone turning their bike around despite my shouts at him, luckily I didn’t come off here. On the very next secteur of pave however, I managed to find a way to crash. Roubaix was starting to feel a long way away.

I was following a randomer closely behind having shot to the front of our group at the start of the cobbles and he very kindly decided to heavily brake to a stop with no prior warning leaving me with nowhere to go but down. I uttered an expletive or two, got myself back upright and rode off shaking my head.

Aware that I had been at the front of the group and not noticing any of them going past during my altercation, I waited for around 10 minutes at the end of the next secteur which led straight into the Pont Gibus Paris-Roubaix secteur, after which I again waited for about 10 minutes. Eventually getting bored and wondering if someone had had a mechanical, I cycled on. As it was, when I got there I found everyone waiting for me wondering where I’d been. Typical.

We pushed on going over a number of other secteurs, all starting to create an agonising pain in my right hand that felt like I’d broken it. Secteur 13 is where my Paris-Roubaix experience differs to most.

I punctured fairly close to the start of the 1.4km segment, whilst overtaking a particularly slow rider I had to move off the relatively smooth area at the side to the wrecked wheel tracks area and the back wheel made such a metallic clang bouncing around that I was fairly certain the tyre was wrecked. Sure enough, in a matter of seconds it was dead flat. Not having any spare inner tubes (though I did have levers and a pump…go figure) I started walking hoping a fellow cyclist doing the Paris Roubaix challenge would bail me out. Luckily one did after a few hundred metres, so I set about repairing the puncture by replacing tubes, no problems there. The tyre however just would not inflate at all. Back to walking. I made it off the end of the cobbles and found myself in a quiet town of Orchies. No obvious shops on route here, so I stopped and hoped for the best.

A British cyclist stopped and put a CO2 cartridge into the tube as I’d figured it was my pump that was rubbish as I never use it and then went on his way. Annoyingly about 20 seconds the tyre was flat again…I’d been given a spare tube with a hole in it to begin with, great. At this point I was thinking I was basically just going to be sat on the streets of Orchies waiting for the broomwagon to sweep me up and take me into Roubaix, but that’d be at least a couple of hours away before that arrived. I’d turned the bike upside down and taken the back wheel off to make it obvious in case one of the neutral Mavic service bikes appeared…which predictably none did.

What did bail me out however was an older French gentleman who came up to me and enquired what the issue was and said he had some spares at his house, just put the bike in the car and we’ll drive 250m there. Now being British, my upbringing has conditioned me to be highly sceptical at offers of assistance from strangers but this guy was a true gent. He gave me a new tube, then appeared with a track pump and made sure everything was fine before I set off again. I thanked him profusely, making sure I’d shown my gratitude at the help I’d frankly not been expecting and as an offer of thanks gave him the inner tube I’d been given as it only had a small hole and could be repaired and used by someone who actually had a puncture repair kit.

Looking at the map towards Roubaix, I was aware that I’d lost about an hour with this mishap and it seemed easy enough to cut off what looked about an hour’s riding, catch up somewhere near where the group would be and still do the 5* rated Carrefour de l’Arbre and more importantly, get to the Roubaix Velodrome before it shut at 6pm. I figured I had just under 4 hours to ride about 40miles, in theory very doable, provided nothing else went wrong.

I headed North instead of West, up a ridiculously straight busy main road, into a headwind. The sides of the road were full of grit, something I tried desperately to avoid having had one puncture and now heading off route, away from even the broomwagon. In theory I had to make a left turn according to the rudimentary map detailing the Paris Roubaix event route, in practice the turn I saw said it was heading to a village in the middle of the section of the route I was trying to cut off and was no good. Suspicions I’d missed the turn were raised when I began to see long disused and empty pillboxes from the Maginot Line and then a sign saying I’d entered the Wallonie Region (yet oddly no mention of Belgium). Nothing really changed from one side of the border to the other, same style buildings, same language, but here I was, in Belgium.

Now traditionally, Paris – Roubaix has never entered Belgium, in fact the only mention I can find relating to Belgium is to do with when 3 riders got disqualified after riding through a flashing train crossing because apparently in Belgium they stop the trains going through cycle races. This was completely new ground. I turned off the main road, going more North West and basically ended up on the tarmac lanes going between farms. All in all, I spent about 30-40 minutes in Belgium quite enjoying myself, especially when I realised how much honeycake and honey waffles I had in my jersey pockets from the last feed stop. A much needed sugar rush.

I shortly came to a junction where a lot of cyclists suddenly zoomed past, chasing onto the wheel of one, I noticed he had one of the Paris-Roubaix numbers on his handlebars, I was back on route! Unfortunately less than a mile later I was back on the pave. I’d missed out Secteurs 12-6 but now everyone I passed or was passed by could be someone I recognised from my group. Secteur 5 was a good introduction back to the brutalness of the pave, that pain in my hand hadn’t got any better, Secteur 4 was the 5* Carrefour de l’Arbre, which felt hard work but I didn’t realise it was that one until near the end. It was good to know I’d done the last really hard section and celebrated with my final piece of honeycake.

Getting into Roubaix, there was one final annoying drag of hill and then I hit the back of a massive traffic queue that went all the way up the final stretch of straight boulevard to the entrance of the Velodrome. Taking my lead from a presumably French cyclist, we did some traffic weaving, waiting at red lights and very slowly making progress.

Eventually we reached the right turn into the Roubaix Velodrome park and then the glorious moment where it all opens up and you’re on the velodrome proper. This is closely followed by a feeling of panic as your eyes tell your brain that based on what they’re seeing you’re in a deal of trouble. The angle of a velodrome is way way steeper than it looks on a television.

Immediately at the finish I had a medal hung around my neck, as I had reached Roubaix under my own steam after doing 150km, even if it was unconventional! I was pointed in the direction of the coach expecting to see the guys already there…as it was I’d managed to get 15 minutes ahead of them and Chris’ face in particular when he saw me sat there already was priceless. I told them some cock and bull about how I must’ve overtaken them without them realising before giving them some snippets of what had happened. I don’t think I mentioned the French guy at all amongst all the other happenings.

With any luck, with the Tour de France covering some of the same ground, they crash less than I did or at least end up as equally as unhurt. After yesterday’s crashfest on Stage 3 of the Tour de France, there will be a nervous peloton for sure.