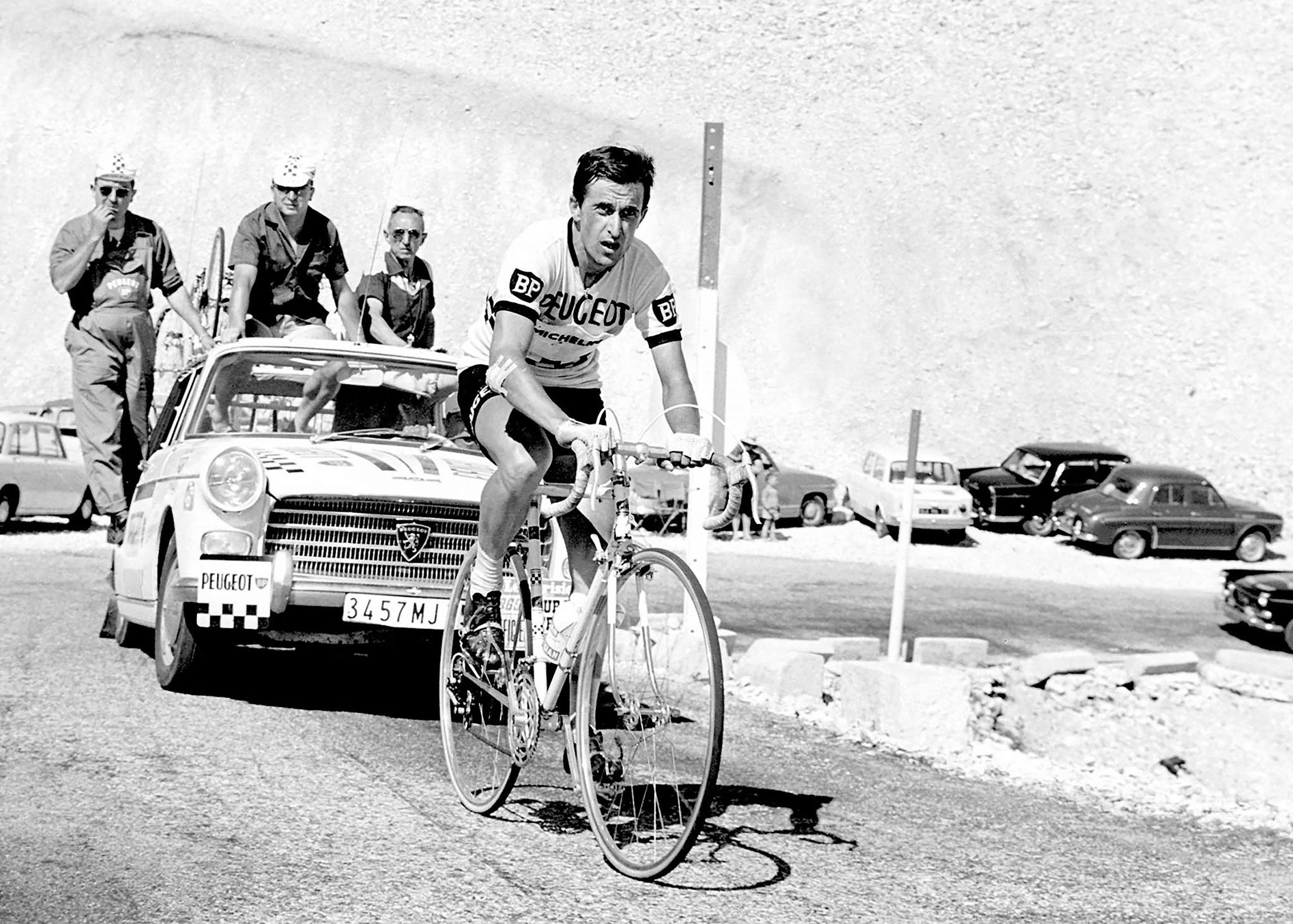 Over the years, there have been a few Tour de France deaths, by riders and non-riders. It’s an unfortunate part of bike racing that the combination of high speeds and only thin lycra for protection sometimes doesn’t end well. Thankfully it’s a very rare occurrence with no deaths in the last 25 years of racing the Tour de France.

How many Tour de France deaths have there been?

There have been 4 Tour de France deaths for riders across its long history.

Starting with the first death on the Tour de France, it’s one that’s unlikely to ever be repeated. Adolphe Hélière, aged 19, joined the race as one of the 80 or so independent riders, effectively amateurs joining in, hoping to be noticed by the major teams. His day job was as a car mechanic but he had been racing bikes for a while. Before the 1910 Tour de France, Hélière finished 13th in Paris-Le Mans.

The 6th stage of the 1910 Tour de France saw riders head out of Grenoble down to the costal city of Nice. Hélière completed the stage in 63rd place. Many of the independent riders saved money by sleeping outside rather than paying for hotel rooms. Reportedly Hélière spent the night after Stage 6 sleeping on the beach at Nice. The following day, the riders were treated to a rest day in Nice and Hélière was recorded as saying he was looking forward to riding through his hometown in the coming days.

What exactly happened to Hélière isn’t clear. One version suggests that he simply succumbed to exhaustion whilst swimming after 6 days of racing. Another version says that a jellyfish in the sea stung Hélière. Then he drowned due to a bad reaction to the sting. The local paper reported that after a large meal, Hélière suffered some form of attack or congestion as soon as he got into the water. Whatever the reason, despite the speed with which he was brought back to shore, doctors were unable to save the young rider’s life.

Grenoble also gets a mention in the first on-road death in the Tour de France. That day’s race from Grenoble to Gap was the 8th Stage of the 1935 Tour de France. Francisco Cepeda crashed into a ravine whilst descending the Col du Galibier and suffered a fractured skull. Cepeda died shortly afterwards on the way to the hospital. He never regained consciousness.

Cepeda was 29 years old at the time of the crash and had had a solid racing career. He was 3rd in the 1927 Spanish National Road Race and twice won the Circuito de Getxo race which continues to this day.

Writing a report on the death in the L’Auto newspaper Dieudonne wrote the following tribute and cast light on the mindset of riders and sportsmen when faced by a tragedy to one of their own.

“Poor little Cepeda, who met his destiny on the road to Bourg-d’Oisans. Other riders, when they heard of his death, reflected for a moment, thought about all the dangers they faced but, like a driver who slows up when he sees a car with its wheels in the air, they set off again 10 seconds later thinking ‘not me!’. They quickly forget the tragedy because if they thought about it, they would never ride again. Goodbye, little rider without glory but not without merit, your cards were marked and you tried to rebel in vain.”

The most famous Tour de France death belongs to that of British rider Tom Simpson. The highest-profile rider on this list, Simpson was, without question, the most successful British road cyclist until recent years. The 1965 World Champion also won the Tour of Flanders, Milan San Remo and Il Lombardia. Mark Cavendish is the only other Brit to be World Champion and win Milan San Remo, with no other British rider able to match Simpson’s Flanders and Lombardia wins since.

Simpson aimed to do well in the 1967 Tour de France. This was to earn more from the post-Tour criteriums where professionals earned a large bulk of their yearly wage in appearance fees. One week into the race, Simpson was 6th Overall with no serious rivals ahead of him. However, he began to suffer with a stomach upset whilst riding across the Col du Galibier. He suffered through the next couple of stages, riding on empty and losing chunks of time. Heading into Stage 13, he was 7th Overall, but now rivals had overtaken him in the classification. Teammates began to suggest that Simpson quit the race.

Stage 13 saw the riders take on the legendary Mount Ventoux on a very warm day. Already dropped from the group of favourites, Simpson began to zig-zag back and forth across the road. 1 kilometre from the summit, Simpson fell and despite protestations from the team manager to stop, Simpson pushed on. Almost 500 metres further on, he began to wobble and spectators caught him before he crashed again. Gently lowered to the side of the road, Simpson was already unconscious and had to have his hands pried from the handlebars. Despite the best efforts of those on the scene, including the Tour’s medical team, he didn’t regain consciousness. 40 minutes afterwards, a helicopter took him off the mountain. Simpson was taken to the hospital in Avignon, where he was pronounced dead.

The death of Tom Simpson is attributed to a combination of amphetamines (that were rife in the peloton at the time), alcohol, the stomach upset and the heat. The lethal combination allowed Simpson to push himself past his body’s limits, particularly one already run down with illness.

Tommy Simpson rode to his death in the Tour de France so doped that he did not know he had reached the limit of his endurance. He died in the saddle, slowly asphyxiated by intense effort in a heatwave after taking methylamphetamine drugs and alcoholic stimulants.

The day following Simpson’s death, the peloton had to ride. They agreed that a British rider should cross the line first. Barry Hoban was given the honour and he went on to marry Simpson’s widow a couple of years later.

Almost 30 years passed before the next death of another rider on the Tour de France. Fabio Casartelli was the reigning Olympic champion, after taking the victory at Barcelona in 1992. The last Olympics where only amateurs could race. Casartelli turned pro the following year and completed that year’s Giro d’Italia. Team Motorola selected him for the 1995 Tour de France. The team included big names like Sean Yates, Lance Armstrong, Steve Bauer and Frankie Andreu.

Riding in the days before helmets were mandatory, Casartelli and other riders crashed on the descent of the Col de Portet d’Aspet on Stage 15. Casartelli was the only rider to make contact with his head on the concrete blocks that lined the roadside. A medical team was there to stabilise Casartelli within 10 seconds. Afterwards the helicopter came to take him to the nearest hospital. Whilst on the helicopter Casartelli stopped breathing and could not be resuscitated.

Casartelli’s death sparked a debate on the mandatory use of helmets in the peloton. Doctors argued that the injuries wouldn’t have been as severe with a helmet. Particularly as the impact was made with on the top of the head. It took another 8 years for helmet wearing to be made compulsory. The death of Andrey Kivilev during Paris-Nice finally tilting the scales towards this act of safety.

Unfortunately, it’s not just riders who have died during the Tour de France.

The first three non-rider deaths were motorcycle related. The very first was in 1934 when a rider performing pre-race entertainment in a velodrome crashed at high speed. In 1957 one of the race following motos crashed off the road in the Pyrenees killing the rider and the journalist he was transporting.

The following year, a race official died after making contact with Andre Darrigade. This was in a sprint at the Parc des Princes in Paris. The largest death toll from a single event was when 9 people died. Their supply van hit a bridge in 1964. The pre-race advertising caravan has claimed the lives of a pair of children in the early 21st Century. Most recently, another spectator died in 2009 when hit by a police motorcycle.