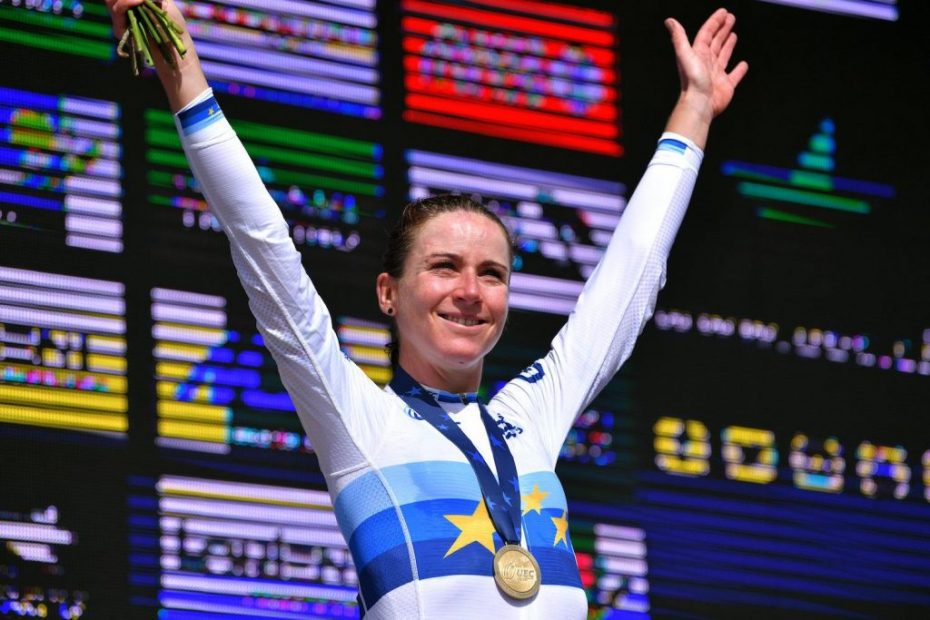 World champion Annemiek van Vleuten has added a European title to her growing trophy cabinet with a stunning victory in the European Road Race Championships in Plouay.

The 37-year-old claimed her sixth victory of the season by holding off Elisa Longo Borghini (Italy) in a duel for the gold medal.

Dominant Dutch
Van Vleuten’s Dutch team dominated an attacking race from start to finish, forcing numerous splits in the peloton until a select group of around 40 riders remained at the head of the race.

A crash then caused some confusion in the bunch as riders checked to see who was involved, but as an attack was launched, Van Vleuten reacted quickly. The move saw the world champion form part of a strong leading trio with 30km remaining, while the group behind failed to organise a chase.

Eventually Chantal van den Broek-Blaak (NED) bridged across to the leaders to give the Dutch the numerical advantage with less than 20km remaining. But sensing the danger, Longo Borghini soon went on the offensive, with only Van Vleuten able to respond to the Italian’s acceleration.

Tactical Game
With her teammate still chasing on behind, Van Vleuten was in an ideal position and she sprang an attack of her own with nine kilometres left to race. It looked like the double Strade Bianche winner was set for another solo victory, but Longo Borghini managed to claw her way back.

The leading pair then began to play cat and mouse, allowing Van den Broek-Blaak and Katarzyna Niewiadoma (POL) to come back into contention with four kilometres remaining. Once again, the odds favoured the Dutch, but Longo Borghini wasn’t content to wait for a sprint finish as she attacked again.

Van Vleuten was the only rider able to follow and the race was set for a duel for the win as the duo passed under the flamme rouge. As the line approached Van Vleuten opened up the sprint, swinging across the road and powering away from her rival to make it six wins from eight starts in 2020.

Annemiek van Vleuten:
“Thanks to the Dutch squad because we lined up with a dream team. We had eight super-strong girls and we decided that it was in our advantage to make the race really hard.

“Between myself and Anna van der Breggen, it was both our jobs to make the race super hard to set something up for the other girls. I was so proud to race together with my team and I am so proud to do this together.”

“Longo Borghini was very strong today, so I really didn’t get it for free. But I knew I would be stronger than her in the sprint. I started the sprint a bit too early, that was a bit stupid.”

“I felt really busy today and wanted the others to get chances too. It was a very nice game, in which we were very strong as a team. I really enjoyed it.”