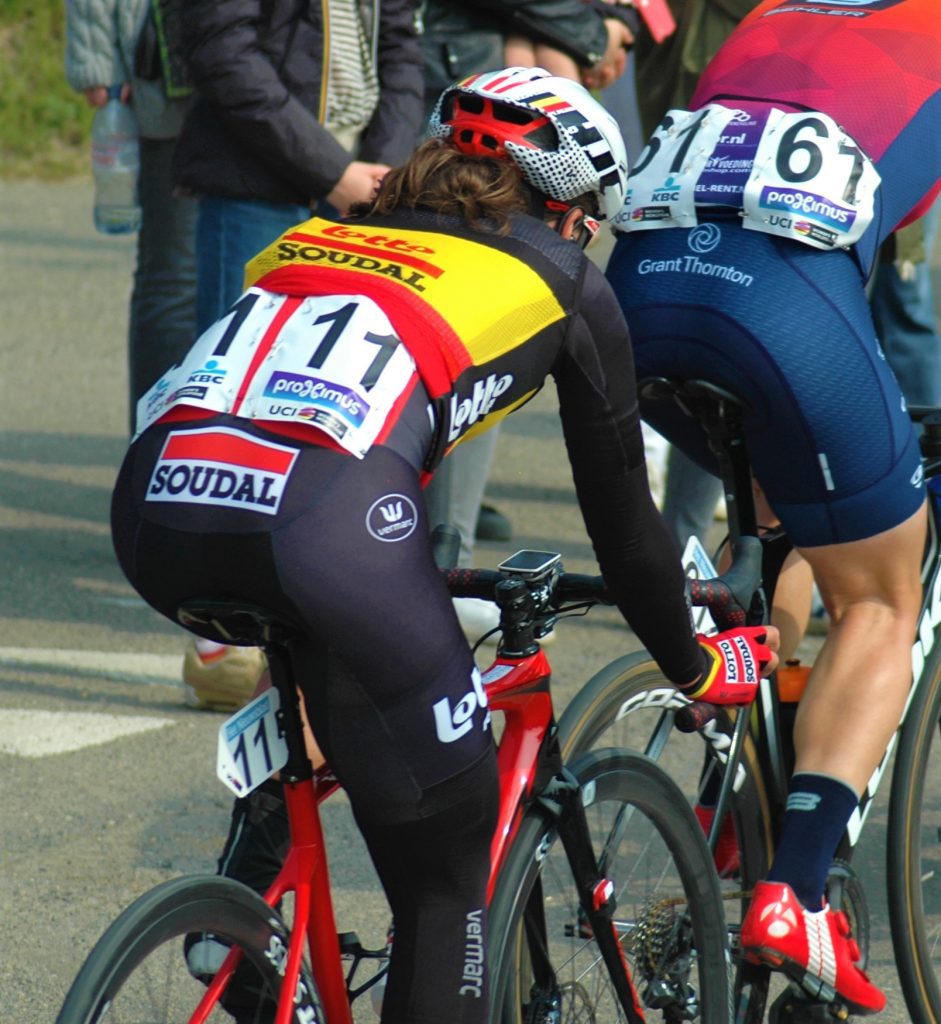 The women’s Gent Wevelgem has a little bit more history than many of the other Spring Classics in the women’s calendar. One of the first major spring classics to get a women’s race in modern times, the race has been held each year since 2014. As a new race, it spent 2 years at the 1.2 level before jumping straight into the Women’s WorldTour in 2016. Despite pulling across the locations from the men’s race name, the race has nearly always started in Ypres rather than Gent (and 1 year from Deinze). It also pulled across the In Flanders Fields moniker from the men’s race, a nod to the battlefields in this part of Flanders and the 100 years since they were used.

The area is full of WW1 battlefields and graveyards. The race route passes plenty along the way too. From the massive Tyne Cot cemetery to the Hill 63 gravel section plugstreet. The major point of the women’s Gent Wevelgem is the Kemmelberg. Itself the site of fierce fighting. The women’s race is spared the ossuary ascent but still has to take on the Belvedere side. 400 metres at 10.8% average hides the max gradient of 16.3% and the cobbles. The women’s QoM is held by Elise Chabbey at 95 seconds, the short duration will still be enough to explode the race with the effort.

The first few editions saw breakaways win the day. Lauren Hall took the win in 2014 from a group of 8, the following year Floortje Mackaij arrived solo at the finish line by a few seconds. Chantal van den Broek-Blaak took the biggest solo win in 2016, winning by 1 minute 24 seconds. Ever since 2017, the sprinter teams have managed to successfully control the race. Large bunch sprints have generally been the name of the game. The weather forecast currently suggests a big tailwind of 16mphh boosting the riders along from the Kemmelberg. That will make it easier for both the sprinters and breakaways. With speeds high, attempted breakaways will find it tough to get some distance after the climb. However any riders with a gap already will also be tough to close down, aided by the tailwind.

Despite losing out to Grace Brown’s great attack on Thursday, it’s still tough to look past SD Worx. They’ll be able to call on the 2020 Women’s Gent Wevelgem winner Jolien d’Hoore. She’s going to be the lead rider with a pair of 2nd places in 2017 and 2018 backing up the win last year. She’s now on a run of 4 top-10 results in a row. That impressive run isn’t as good as the one Amy Pieters is on though. She has a 100% top-10 record in 2021, with 9 great results from 9 races. She’ll work for d’Hoore but if the race fractures at all, Pieters will also be heading for the win. Despite never finishing on the podium, she has 5 top-10 results from 6 Gent Wevelgem starts.

Elena Cecchini is another option for the team with a pair of top-10s here before. She’s still waiting for her turn this season.

Lotte Kopecky is another in-form rider, who finished 4th at De Panne. She missed the initial front split in that race but the ease in which she bridged across to it impressed everyone who saw it. She was 2nd in 2020’s Gent Wevelgem and certainly has the legs to go one better in 2021. Emma Norsgaard is the other massively in-form rider, netting her 4th 2nd place of the season at De Panne. With that result she took over from Sarah Gigante as the leader of the WorldTour youth jersey so will be in a slightly different blue at Gent Wevelgem. She only had a best here of 14th from 2020 but looks set to beat that this season. It feels like Norsgaard isn’t far away from the breakout victory.

The doubts about Team DSM and Lorena Wiebes continue after missing the important split at De Panne. She was 2nd in the 2019 Gent Wevelgem and you’d think she’d be a favourite normally. She looked to have rediscovered her form when she was battling for the win at the Healthy Ageing Tour, only to crash. Then she was 5th at Nokere Koerse with a very laboured sprint. Wiebes has then missed splits at the two flat races since. You still expect her to right things. Marta Bastianelli won the 2018 edition, sandwiched by 4th places each year either side too. She’s another who doesn’t appear to be in tip-top form. 6th at the season start in Omloop het Nieuwsblad promised good things but her only result of note since was 9th at Nokere Koerse. It’s looking like she’s taken a step backwards since the knockout form of 2018 and 2019.

You’d think Marianne Vos would have better results in this race, but so far she’s only been 12th and 13th at the women’s Gent Wevelgem. It’s probably down to getting swamped a bit against the pure sprinters as big groups keep reaching the finish line together. She certainly has the form in 2021, finishing 7th at Strade Bianche, 3rd at GP Oetingen and 2nd at the Trofeo Alfredo Binda. Valcar’s Elisa Balsamo has a mixed history at this race. She has a best of 9th place but also a DNF and a 54th too. If it comes down to a sprint, you’d be backing her for a good result in her current form. She was 5th at De Panne and won the GP Oetingen. She’ll need some teammates around to lead her out for the highest possible result.

Ceratizit’s Kirsten Wild might be back after finishing 6th at De Panne. She was the victor here in 2019 and the bunch sprint will suit her style. There are a couple of doubts still about whether she would’ve had the opportunity to sprint for herself at De Panne if teammate Lisa Brennauer hadn’t suffered the slow wheel change in recorded history. Brennauer has her own good record at the women’s Gent Wevelgem. She was 3rd in last year’s race and her best is 2nd place in 2016. Both riders could make the podium, it’s just trying to decipher who is going to get the nod.

Trek Segafredo have got a bit of an odd team for this race. The only sprinter really is Amalie Dideriksen and it’s been a couple of years since we’ve really seen her sprint. Elisa Longo Borghini took that epic solo win at the Trofeo Alfredo Binda and she’ll have to do something similar at Gent Wevelgem to do well. Lizzie Deignan can do very well sprinting in small groups but that’s not how the race is likely to end either. The team’s only hope is to use the firepower of Van Dijk, Winder and Dideriksen to make the race super tough going into the Kemmelberg. Then cross the fingers to see if the race situation the other side works for them.

Both Alice Barnes and Hannah Barnes have top-10s at Gent Wevelgem on their palmares. Alice’s was in 2017 and she hasn’t come close to matching it. So Hannah Barnes is probably the Canyon rider to watch in a sprint. She was 5th at Omloop het Nieuwsblad and then a solid 15th at Trofeo Alfredo Binda. If she can recreate the Omloop het Nieuwsblad form, she can be a contender. Team BikeExchange’s Sarah Roy was 4th in last year’s race. However, she’s not been in form so far in Europe with only a 10th at GP Oetingen. She’ll be the rider to watch for the team in a sprint.

FDJ have a couple of options, with Marta Cavalli probably their first option in a bunch sprint. She was 5th in last year’s women’s Gent Wevelgem and 10th the year before that. The big power sprinters will probably come around her but the smaller the finishing bunch, the better her chances. FDJ can always use Emilia Fahlin too, although her best result here though is only 18th. She’s in good form though, taking 9th at Trofeo Alfredo Binda. She shouldn’t have any problems on the Kemmelberg after scaling the climbs there.

Drops sprinter Marjolein van ‘t Geloof presents their best chance of a good result. She was 25th here back in 2015 and has developed much more since then. There are question marks however, she took a nasty fall during De Panne. Whilst she did get back on the bike and finish the race, it took a while for her to get back up off the road. She could be a late scratch from the startlist. Arlenis Sierra is another rider who’s been in the wars recently, being hit by a car whilst training. She did well at De Panne though, finishing 17th in the second group on the road. Her best Gent Wevelgem result is 4th and she can be a contender in the sprint if she rides well.

After finishing 4th at the Omloop van de Westhoek, De Panne was a bit disappointing for Parkhotel Valkenburg’s Amber van der Hulst. She ended up 32nd, missing out on the splits in the wind on the second lap of the circuit across de Moeren. She’s never raced the women’s Gent Wevelgem before but if all goes to plan, she can contest the sprint at the end sneak into the top 10.

There’s always the chance the race doesn’t finish in a sprint. Especially after Grace Brown‘s sneaky attack at De Panne. She’s racing again here and will need to do something similar to get a good result. The peloton will surely be wiser this weekend though. There are also the likes of TIBCO’s Lauren Stephens who can launch strong attacks. She was 6th last season after reading the split. Canyon SRAM’s Lisa Klein was 3rd in 2018 and will be happiest sprinting from a small group. She’s in good form, enlivening the Healthy Ageing Tour and then finishing 3rd at Nokere Koerse.

Valcar’s Vittoria Guazzini was 13th last season. She’s been relatively quiet in 2021, with the best result of 13th at GP Oetingen. In theory, she’ll be part of the lead-out for Elisa Balsamo, but if anything happens to her then Guazzini will be able to step in. It’s a similar story for Maria Giulia Confalonieri who is behind Kirsten Wild and Lisa Brennauer in the pecking order. She has a series of solid results at the women’s Gent Wevelgem, with the best result of 6th in 2017.

Movistar’s Jelena Eric continues to do well in 2021. She finished 8th at GP Oetingen and then a very impressive 11th at Trofeo Alfredo Binda. She’s going to have to work for Emma Norsgaard but presents a very useful option, particularly if the race splits up after the Kemmelberg. Jumbo Visma can rely on Anna Henderson‘s good form to assist Marianne Vos. Like many others, if something happens to the team’s leader, Henderson can step up. Top-10s at the Healthy Ageing Tour and Le Samyn show her good form.

2015’s winner Floortje Mackaij can always spring a surprise, even sprinting to 8th here in 2018. With Team DSM’s issues though, she may be reduced to a lieutenant role to keep Lorena Wiebes out of trouble or close some inevitable gaps. She represents Team DSM’s next best option to Wiebes’ sprint.