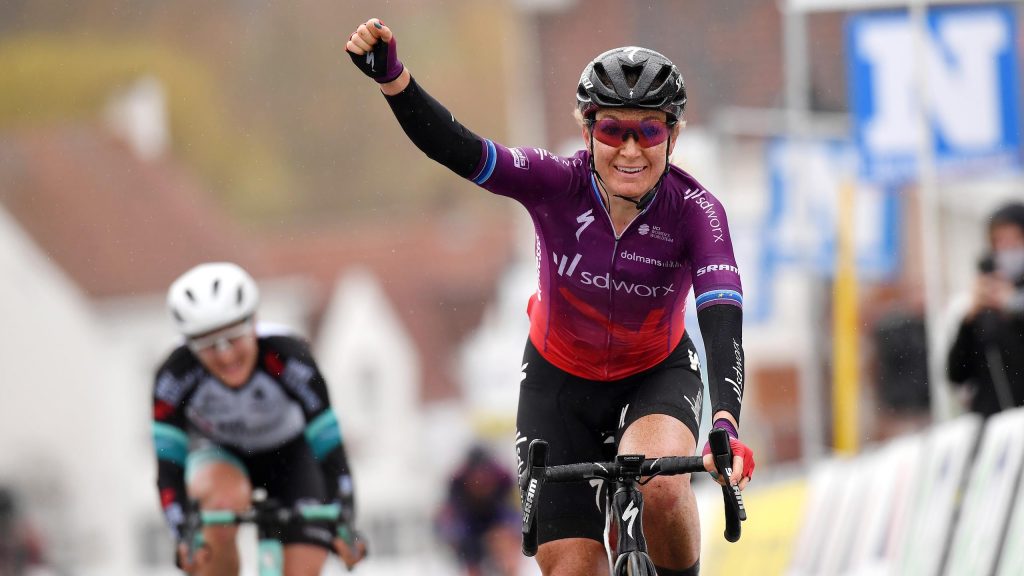 Nokere Koerse is still a new race on the women’s calendar. The first edition took place in 2019 and saw Lorena Wiebes power up the Nokereberg to take the overall win. Canyon’s Lisa Klein and Lotto Soudal’s Lotte Kopecky joined Wiebes on the podium. 2020’s race was cancelled amid the COVID pandemic but we’re lucky enough to see the race return in 2021. Nokere Koerse has also had an upgrade in its status. In 2019 it was a 1.1 race but has joined Omloop het Nieuwsblad in becoming a 1.Pro race in 2021.

2019 came down to a big bunch sprint between 34 riders as the parcours didn’t create any divisive gaps. Riders head south from Deinze and join a local circuit at Nokere. 2 laps of this are tackled at a 30.5km distance per lap. The riders then join a shorter circuit which they complete 3 times -12km a lap – to finish. The total race distance is 124km.

There are 8 sections of cobbles, although mostly quite short sections. The one exception is the 1,600m long Huisepontweg with its distinctive windmill. The cobbles aren’t horrible here though and the riders come at it from the side ending with a downhill. The climbs of note are the Lange Ast, 400m at 5.2% and the Nokereberg itself, 350m at 5.7%. Odds are we see another decent-sized bunch sprint in 2021’s Nokere Koerse.

Eurosport/GCN/Sporza will be showing highlights after the finish of the men’s race at around 4:30pm

Lorena Wiebes would normally be a huge huge favourite to retain her title but there’s a couple of question marks about whether she will have recovered from her injuries at the Healthy Ageing Tour. The upside of that race is it showed that she does have the form to be at the front of the business end of races. It was a nasty crash though, clipping wheels with Alice Barnes at speed and sustaining a fair amount of road rash. Lotte Kopecky joined Wiebes on the podium at the last Nokere Koerse and has started 2021 in amazing form. 4th at Omloop, winning Le Samyn and only a poorly timed mechanical taking her out of the front group at Strade Bianche. She is an obvious favourite.

Another rider in good form so far in 2021 is Movistar’s Emma Norsgaard. She’s now been 2nd in 3 races in 2021 without visiting the top step of the podium. 2nd behind lone leader Lonneke Unken on the VAMberg stage of the Healthy Ageing Tour was a great result. Compared to those repeated ascents, these climbs will feel like a piece of cake. This race should really suit Marta Bastianelli and her 6th at Omloop het Nieuwsblad shows that she’s back to form. She’ll be wanting to recapture some of the form of her stellar 2019 and a podium here would be her first since the opening weekend of the 2020 season.

SD Worx, once again, brings a roster where every rider could genuinely win this race. Amy Pieters is who I’m going for as the Plan A option. She was 4th at 2019’s Nokere Koerse. She’s in great form so far in 2021, finishing no lower than 6th in her 6 races so far this year. Like Norsgaard, she’s missing a win that her form has earned. Jolien d’Hoore is the other major sprinter contender on the team. She’s just finished 2nd at GP Oetingen and won a stage of the Healthy Ageing Tour. In theory, the uphill finish of the Nokereberg might sap some of her power. It’ll be interesting to see who leads between Pieters and d’Hoore.

They’re supported by Elena Cecchini, Lonneke Uneken, Roxane Fournier and Christine Majerus. Cecchini has been around the top-20 at Le Samyn and Strade in 2020. Lonneke Uneken just took an epic solo stage win at the Healthy Ageing Tour that took her to 4th in GC. Fournier was 10th at the last Nokere Koerse but is looking to recapture some of that form this year. Christine Majerus has been very visible around the front of races this year and took her best result of 11th at the GP Oetingen. All these riders have a path to victory!

Aussie Champion Sarah Roy got her European season going with 10th at the GP Oetingen this week. Hopefully, she continues the form that saw her get 3 top-5 results at major classic races at the end of 2020. If so, she will be a serious contender throughout the spring. Elisa Balsamo also got her season going at GP Oetingen by taking the win. She’s got previous on this sort of terrain too, taking the victory over Wiebes and Kopecky at the 2019 Dwars door de Westhoek. It will be interesting to see if she can position herself to take victory on the Nokereberg.

I’m honestly not sure about Trek at this race. You’d say Ellen van Dijk would be their best rider but not a massive favourite against the sprinters. Winning the Healthy Ageing Tour suggests she has the form. Cordon-Ragot will do alright and could do a breakaway. It’s a similar story with Lauretta Hanson. Paternoster hasn’t replicated her 2019 form after preparing on the track for the postponed Olympics. And whilst Amalie Dideriksen is probably the most out and out sprinter, she has been working for others for the most part recently. Chloe Hosking has been added to the startlist and she’s got a good chance of powering up the Nokereberg.

Canyon SRAM’s Lisa Klein seems to have found her road legs in 2021. She took 6th on GC at the Healthy Ageing Tour after attempting a doomed breakaway in an effort to win the race. Her exciting attacking racing there bodes well for the season. Teammate Alice Barnes also had a good Healthy Ageing Tour, finishing 2nd on Stage 1. She was consistent through the race and finished 7th on GC, just behind Klein. The pair will see who has the best legs between them heading into the finish on Wednesday.

Maria Giulia Confalonieri took her best result of the season for Ceratizit at the GP Oetingen with 6th place. The sprinter finished 7th at last year’s Brabantse Pijl which was a similar rolling course. She should be up there at the end vying for a good result. Bingoal Casino-Chevalmeire’s Thalita De Jong rolled the back years at the GP Oetingen. On paper, the 15th place doesn’t look too special but a late mechanical took her out of the running. It’s a rare recent highlight for a rider that’s suffered with injures for the last 4-5 seasons. Hopefully, this is a sign of more to come.

Jumbo Visma can call on the pair of Anna Henderson and Riejanne Markus. Henderson is one of the breakout riders of the start of the 2021 season. Impressing with 3-top 10 results and being around at the front of races. After a quiet 2020 at Team Sunweb, she’s starting to produce the results British fans knew she was capable of at this level. Riejanne Markus might find the climbs not quite hard enough to really excel but she was 12th at Omloop het Nieuwsblad. She was also the lead-out for her previous team at De Panne last season. With the uphill finish here, it might give her an opportunity. There’s also Romy Kasper for good measure, who has followed up her top-10 at Le Samyn with 4 more top-20 results. The Nokereberg finish seems quite good for her but she may be leading out the in-form Henderson. With Markus off the startlist, Karlijn Swinkels has been added. She normally does better on flat sprint finishes but she forms a good double-act with Henderson in 2021.

Drops-Le Col rider Marjolein van ‘t Geloof looks to have found some form at the start of 2021 after a couple of tough seasons. 5th at Le Samyn was followed up by 9th at the technical sprint finish on Stage 1 of the Healthy Ageing Tour. She missed the lead group at the GP Oetingen but was 3rd (21st overall) in the bunch sprint behind the leaders. Parkhotel Valkenburg’s Amber van der Hulst impressed at the Healthy Ageing Tour. She finished 9th Overall after finishing in the top-10 on 2 stages and doing a solid time trial in the middle too. Her Stage 3 result was particularly impressive, climbing well in an elite bunch. It feels like we’re not far away from a true breakout result.

Finally, it wouldn’t be a preview of a race likely to finish in a sprint without mentioning NXTG’s Charlotte Kool. Another young Dutch talent, she has begun to show the same promise that put her on the radar in 2020. She was 5th in the first stage of the Healthy Ageing Tour. Beating the likes of Amy Pieters and Emma Norsgaard in the carnage left by Wiebes’ crash.

Behind Sarah Roy, BikeExchange have Arianna Fidanza as well. So far in 2021 she’s only raced Omloop het Nieuwsblad and finished 89th. She’s shown she can do well in this sort of flatter spring race though. She made it to 8th in the Omloop van het Hageland sprint finish last season before the lockdown started. Austrian Kathrin Schweinberger is a continual outsider for these sorts of races for Doltcini-Van Eyck. It feels like she’s close to a big result without ever actually achieving one. She was 20th at the GP Oetingen, finishing 2nd in the bunch sprint behind the lead group. If she can reach the finish in the lead group here, she may sprint herself into the top-10 finally.

Movistar’s Jelena Eric transformed that visibility in races so far in 2021 into an 8th place at the GP Oetingen. She will probably have to work for Emma Norsgaard in this race though which will stunt her ability to follow that up. If anything happens to Norsgaard though, Eric will become a decent contender. It’s a similar story for Jumbo Visma’s Teuntje Beekhuis who potentially has 3 other riders ahead of her in the pecking order her. She took 8th Overall at the Healthy Ageing Tour, largely off the back of a good time trial stage. You can potentially see her doing well if a decent sized group breaks away from the peloton.