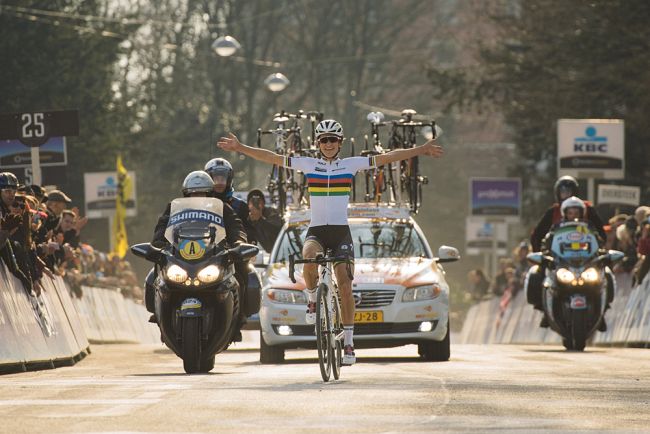 Omloop het Nieuwsblad is here, the start of the proper 2021 season and the introduction to the spring classics too. The first preview of the season is the hardest to write mind. Riders have changed teams, the form book is wide open and we have no idea who is raring to go! This year’s Omloop het Nieuwsblad will show the continuing effect of the COVID pandemic, with no spectators welcome on the cobbled sections or the climbs. The start/finish areas will also be off-limits to fans and so watching the race on TV is the best option.

2020’s Omloop het Nieuwsblad was won by Annemiek van Vleuten, who was the quickest rider up the Muur van Geraardsbergen. She got a gap which she held over the top of that climb and increased over the Bosberg. The tailwind and slightly downhill run to the finish meant she wasn’t seen again. Behind Van Vleuten, a group of 4 contested the podium. Ale’s Marta Bastianelli took 2nd place ahead of Floortje Mackaij, with Chantal van den Broek-Blaak and Ellen van Dijk just missing out on the podium.

The position of De Muur ahead of the Bosberg near the finale of the race makes it the crucial point of the race. Most of the stars of the peloton will be able to stay together until Geraardsbergen. The steepness and cobbles of De Muur means gaps appear and riders can escape. Last year, Van Vleuten used the climb to her advantage. Small groups can be broken up further still on the short, steep Bosberg climb. After which, only the odd roller into Ninove will cause riders with tired legs to drop off.

TV coverage for Omloop het Nieuwsblad is in an interesting situation. Eurosport & GCN haven’t managed to negotiate the rights which leaves Sporza as the sole channel showing the race at the moment – in Belgium only.

Update: The race has reappeared in the schedule for Eurosport Player and GCN, the live timings are below.

Another Update: Eurosport Player/GCN will now be showing the full live stream of Omloop het Nieuwsblad. Timings updated below.

Starting with an obvious favourite, 2020’s race winner Annemiek van Vleuten has moved across to Movistar for 2021. She won last year’s race with an impressive attack on De Muur. Movistar has definitely increased their firepower for 2021 but there are question marks about how effective the team will be in support of Van Vleuten, particularly in the Spring. But then Van Vleuten is also just strong enough to do most things alone. Movistar’s second option is American Leah Thomas, the main focus will be Van Vleuten though.

Lotte Kopecky has, surprisingly, only ever raced Omloop het Nieuwsblad once before (finishing 11th). She’s another rider to have moved in the off-season. Leaving Lotto Soudal and joining Liv Racing (who were CCC-Liv in 2020). She came into a period of great form at the end of 2020, winning her first WWT race at the Giro Rosa. Kopecky then podiumed the final 3 WWT races of the season in her native Belgium. Finishing 3rd at the Tour of Flanders proved that Kopecky was more than just a sprinter, but her rivals will need to drop her on the Muur to increase their chances of winning.

SD Worx are absolutely stacked, as you’d expect. This isn’t Anna van der Breggen‘s best race, although she did win in 2015. She only has 1 other top-10 result here though. Despite it being Anna’s last season as a rider, she may work for Chantal van den Broek-Blaak again. Her elite domestique role allowed Blaak to win the Tour of Flanders last year. Blaak won Omoop het Nieuwsblad in 2019 and has 3 other separate podium finishes. She’s a big contender. Jolien d’Hoore hasn’t raced Omloop for the last couple of years but has a pair of top-10 finishes previously. The change to the Muur/Bosberg finish probably doesn’t suit her as much as the old courses though. SD Worx also has Amy Pieters, Demi Vollering and Christine Majerus who could all each win the race in their own right.

Trek-Segafredo has its usual multiple options to play. Lizzie Deignan is another returning to Omloop after a few years of avoiding the race. She’s not raced here since winning the 2016 edition. The Muur/Bosberg finale suits Deignan who stands a chance of keeping up with accelerations on the steep, cobbled slopes and is strong enough to push on to the finish. Her teammate Elisa Longo Borghini races Omloop regularly in comparison and has 3 top-10 finishes. Longo Borghini had a great 2020 season, coming back after the lockdown in good form which saw her win a Giro Rosa stage and both her national championships. She was a consistent force at the front of races. Ellen van Dijk is also a very elite third option for good measure. She’s never won Omloop het Nieuwsblad but has 6 top-10 finishes.

The new version of Sunweb, Team DSM have a couple of cards to play. 2020’s Worldtour Youth Ranking winner Liane Lippert is an interesting option. In theory, the short steep climbs suit her and she was 2nd in 2020’s Brabantse Pijl too. She’s never raced Omloop het Nieuwsblad before though. Her teammate Floortje Mackaij was 3rd in that Brabantse Pijl. She got her best Omloop het Nieuwsblad result in 2020 with 3rd place as well. Solo attacks are her major card to play. The pair present decent options for the podium.

Marta Bastianelli has come very close to winning Omloop het Nieuwsblad the last 2 years, finishing 2nd each year. She started off 2020 in great form but illness post-lockdown slowed things down for her. She finished the season with 3rd place in the Madrid stage at the Ceraitizit Challenge. Hopefully, that means she will be in good form going into 2021. Her new teammate Marlen Reusser is a good alternative, she finished 13th in last year’s race. The wildcard option is Mavi Garcia, who has never raced here before. She’s done well in the Ardennes before and scored a 9th place in Brabantse Pijl last year. She’s an unknown quantity really in this sort of race.

Canyon SRAM’s best option is Katarzyna Niewiadoma, although historically this hasn’t been the best race for her. Her best result is 12th in 2017, so we might have to temper podium expectations. 2020 was her first winless season in a while, despite coming close. It will be interesting to see her form early on in 2021. Brit Lizzy Banks moved to Ceratizit over the off-season and becomes their best option for this race. She was 6th in last year’s edition and is an outside bet for the podium. Her teammate Lisa Brennauer is an elite option but doesn’t have the best history here, 16th last year is her best result.

FDJ have strengthened their line-up over the Winter. There’s the constant of Cecilie Uttrup Ludwig, who will continue to be a race favourite at most races. Omloop doesn’t appear to be one however based on past results – a best of 32nd. She’s not taken part in 4 years however and she’s a much better rider now. New teammate Marta Cavalli finished 9th in 2018 and hasn’t raced here since. She’s another who is a better rider now too. Both riders could either end up on the podium or finish well down the order instead.

Some of the Australians of Team BikeExchange have already been racing in 2021. Grace Brown was 2nd in the Australian TT Champs and the Road Race too. Brown kicked on impressively in last year’s Autumn Classics and could be their best option here. Amanda Spratt is expected to take over the leadership role from Van Vleuten and has a pair of top-10 finishes in Omloop het Nieuwsblad. She chose not to travel and race back home in Australia so her current form is less clear compared to Brown.

Tiffany Cromwell is a former winner of Omloop het Nieuwsblad, although it was back in 2013. Back then she was able to beat Van Vleuten, Blaak and Van der Breggen. She’ll probably have work to do for Niewiadoma but Cromwell can still finish in the top-20.

It’s tough to ignore Chloe Hosking after finishing 8th last season. Her issue is that she’s been pushed down the pecking order by moving to Trek Segafredo this off-season. With Deignan, Longo Borghini and Van Dijk all vying for their own chances, Hosking will probably only come into play if there’s a sprint finish.

Alexis Ryan had a quiet 2020 after breaking her collar bone and missing time during the Spring, which had an impact on her return to racing. Ryan has good results at Omloop het Nieuwsblad, 5th in 2019 and 2nd in 2018. She’s also talked about ‘being close to re-finding the fire of 2019’.

FDJ’s Emilia Fahlin has traditionally not focused on Omloop het Nieuwsblad, instead choosing to save herself for Omloop van het Hageland the next day. With Hageland, unfortunately, cancelled in 2021, that won’t be an issue. She was 5th in Brabantse Pijl at the end of 2020 and will be in with a shout if the race comes down to a reduced bunch sprint.

Normally, Emma Cecilie Norsgaard would also be saving herself for Omloop van het Hageland the following day. The finale of Omloop het Nieuwsblad might be too tough for her to stay in the lead group, but the sprinter did well at Gent Wevelgem last season. She took a first pro win in 2020 and if the race isn’t split up over the final two climbs, will be a contender in a sprint.

TIBCO’s Kristen Faulkner won a stage at the Tour de l’Ardèche in late 2020 and was 11th at Brabantse Pijl too. With TIBCO teammate Lauren Stephens breaking out around the same time, Faulkner went under the radar a little as she got her own good results. With Stephens not racing at this year’s Omloop, Faulkner might have a chance.

Lotto Soudal’s Lone Meertens got herself into the main break at last year’s Omloop van het Hageland and the season before had solid results in Belgian 1.1 level races. She’s a young rider who might be seen off the front again in this year’s Omloop het Nieuwsblad.