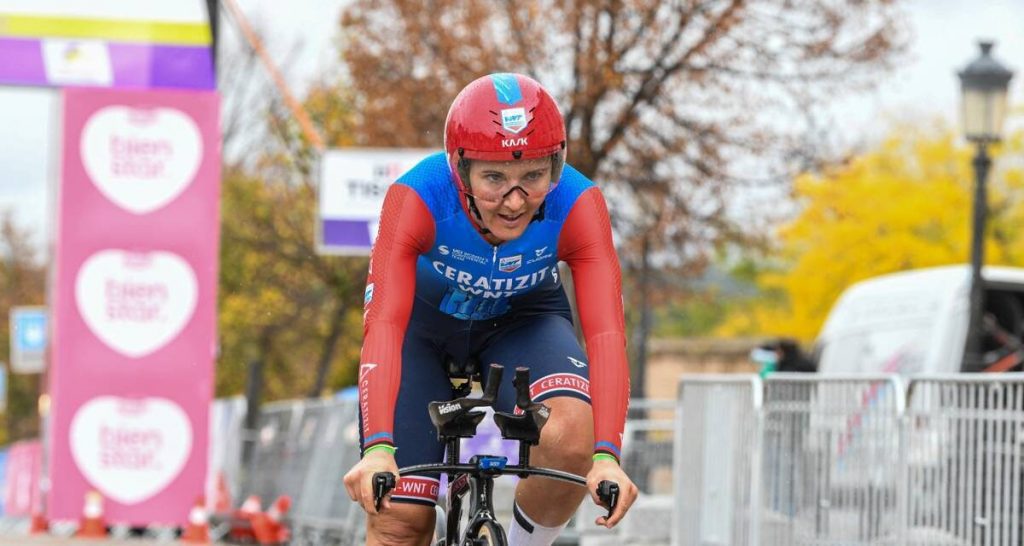 The Healthy Ageing Tour is 10 years old in 2021. After unfortunately missing out on 2020’s edition due to COVID-19, the race is back albeit in a reduced, controlled way. 2019 saw the riders tackle 5 stages (technically 6 with Stage 4 split in 4a and 4b). Whereas the 2021 edition sees just 3 stages of racing. The individual time trial stage has been retained and we’re likely to see the winner come from the best results of that stage, combined with their efforts on Stage 3.

Stage 1 sees the riders take on the Assen TT Circuit. That’s TT in the motorcycling ‘tourist trophy’ way, rather than the cycling TT ‘time trial’ meaning. Riders complete 28 laps of the 4.6km long, wide, well-tarmacked motorsport circuit for a total of 128.8km. This stage should come down to a sprint finish but the wind might have its say. Stage 2 is an out and back time trial on a road next to the sea. The weather forecast is saying wind will be a factor, with 30mph winds predicted. That looks like it will mean a headwind out and a huge tailwind back to the start for the riders. It will suit the powerful, time triallists specialists.

Stage 3 sees riders tackle the Col du Vam or VAMberg a total of 17 times (and a neutralised half lap) for a total stage length of 115.5km. Strong winds of 20mph combined with the short blast of 160 metres of 15-24% cobbles on the berg could blow the race apart. A secondary climb on the lap of 200 metres at 12% won’t help struggling riders much either.

There will be delayed highlights of the race on Eurosport and GCN as coverage clashes with Tirreno Adriatico. Luckily a regional Dutch TV channel is live streaming the race and shouldn’t be geo-blocked.

Thursday 11th March –
Poor weather has meant the postponement of the stage until 2pm GMT at the earliest, Eurosport hasn’t updated its schedule yet so coverage is unclear. But the below is based on the assumption that the last hour will be shown.
15:00 – 16:00 (GMT) – https://podium.tv/
15:00 – 16:00 (GMT) – Eurosport Player/GCN

Ellen van Dijk is a 3-time Overall winner of the Healthy Ageing Tour and gets her first opportunity to lead in 2021. Her strong TT ability means she’s a big favourite for Stage 2 and her Classics background means that Stage 3 shouldn’t pose many issues either. With a strong team for back-up and to marshall the moves, Van Dijk comes into the 2021 edition as the major favourite. Ceratizit’s Lisa Brennauer loves a stage race with a time trial. She continues to win the Vuelta based race with 2 wins in a row in 2020 and 2019. She’s a previous winner here too, taking the win in 2015 and then finishing on the 3rd step of the podium in 2016 and 2017. She’s in good form already in 2021, finishing 7th at Omloop het Nieuwsblad.

Canyon SRAM has a few options across the board at this race. Lisa Klein won the race when it was last hosted in 2019. She took over the lead by finishing 2nd on the time trial on Stage 4a and held it until the end. She was 70th at Omloop het Nieuwsblad but it’ll be a different story at a race where she’s likely to lead. Her teammate Alice Barnes was 5th Overall here in 2019. Again this was off the back of using her strong time trial to help push her up the standings. She has the potential to become the solo team leader if the results pan out in her favour. It’s her first race of the 2021 season, so her current form is unclear.

SD Worx understandably has a great team. Amy Pieters is another former winner, taking the victory back in 2018. She’s started 2021 well, finishing 3rd at Omloop het Nieuwsblad and 6th in Le Samyn. She has a solid time trial but the 3rd stage will suit her a lot more than some of the other time triallists. On paper, it feels like a natural battle between Pieters and Van Dijk for the overall win. Luxembourger Christine Majerus is the only non-German or Dutch rider to finish on the podium in the race’s history. In both 2015 and 2018, Majerus finished 3rd overall. Her time trial is fine, although not as strong as others. Her best hopes will be making Stage 3 as difficult as possible for rivals.

Movistar’s Emma Norsgaard is in career form so far in 2021. She’s finished 2nd in both Omloop het Nieuwsblad and Le Samyn des Dames and seems to be enjoying her switch in teams. She was also 7th at the World Championships TT in Imola last season and presents an interesting option for the overall victory here. Jumbo Visma’s Romy Kasper has the weakest time trial out of these GC hopefuls, however, she has a stronger sprint than most. There’s a way she can win by doing well on Stage 1, managing her losses on Stage 2 and then having a great Stage 3. She’s been 10th at Le Samyn already in 2021, so her form already looks an improvement on a quiet 2020.

Ceratizit’s Kirsten Wild has been 3rd here in 2013 and 2019. She spent 2020 gearing up for the Olympics, which then didn’t take place, and only raced the Giro Rosa. As such her form is really unclear at the moment. In normal times, she’d be a big contender for the sprint on Stage 1. Another big contender for Stage 1 is sprint sensation Lorena Wiebes. She’s been very quiet in 2021 so far, finishing 70th at Le Samyn after potentially being a contender there. Winning Stage 1 here will go a long way to taking the pressure off Team DSM after their really lacklustre start to this season. She has been known to pull out the odd good TT, like in Madrid last year, but Stage 3 should be too tough for her to also do well overall.

SD Worx have a couple of sprint options in Jolien d’Hoore and Lonneke Uneken. Both are at opposite ends of their careers with D’Hoore retiring at the end of this season and Uneken still finding her feet. D’Hoore probably has the outright power to do best on Stage 1. She didn’t get to show off her form at Le Samyn after a late puncture took her out of the running. Lonneke Uneken has been given the team’s #1 and so might be getting an opportunity here. She was 14th at Le Samyn and as she transitions from an out and out sprinter to a classics sprinter, Stage 3 will show how far down that journey she is.

Trek’s Chloe Hosking is their team’s best shot for victory on Stage 1. The sprinter has already finished 3rd this season at Le Samyn, able to go with but not come around Emma Norsgaard. In a finish where outright power will be important, Hosking has an opportunity for the first victory for her new team. Karlijn Swinkels feels like the best bet for a sprint result for Jumbo Visma. Her opening race at Le Samyn wasn’t great, finishing 71st but she’s still got potential. She was 5th in last year’s GP International d’Isbergues, behind winner Hosking and was also 7th in the U23 European TT. She might find herself as the best young rider after Stage 2.

A couple of young options are looking for breakout results. Parkhotel Valkenburg’s Amber van der Hulst was great in flat sprints in 2020 and has carried that over into 2021 by finishing 9th at Le Samyn. She’s got a reasonable TT too so might be another vying for the youth jersey in the first two days. NXTG Racing’s Charlotte Kool announced herself by finishing 6th in a packed field at Omloop van het Hageland in 2020 and then finished 2nd in the GP Euromat behind Lorena Wiebes. Stage 1 will be her main aim and she’ll hope to do better than when she DNFed Omloop het Nieuwsblad recently.

Drops-Le Col’s Marjolein van ‘t Geloof has already started 2021 with a good result, 5th at Le Samyn. Her 2020 season largely came to a stop with COVID taking hold and Drops struggling to find races they could take part in. She was breaking through in 2018 at Lotto Soudal and in 2019 at Ale Cipollini. Hopefully, with a full 2021 season, she’ll show what she can do. There was a time where Movistar’s Barbara Guarischi would be their best option for a sprint finish. In all likelihood, she’ll provide an excellent lead-out for Emma Norsgaard. 2020 was her best season for a few years as she got her best results in Spain – 6th at the Ceratizit Challenge and 2nd at Vuelta Ciclista Valenciana.

Hannah Ludwig was an easy winner in the European U23 TT last season. She also picked up 10th in the TT stage at the Ceratizit Challenge late on in 2020. She’s someone who can do well on Stage 2 and has been known to do a decent climb in certain races when she’s not working for the team quite so much. The Healthy Ageing Tour is her first race of 2021. Jumbo Visma’s Anna Henderson has been more visible in 2021 already compared to 2020. She was a solid 20th at Omloop het Nieuwsblad and an impressive 8th at Le Samyn des Dames too. She may be the lead-out for teammate Karlijn Swinkels on Stage 1 but she can do a great job on the lumpy Stage 3 if she still has the form.

Drops-Le Col’s Joss Lowden has set an unofficial hour record in training recently and must be a contender for the time trial. Able to call on her partner’s (Dan Bigham) aerodynamic experience, she will have the technical side locked down. Combined with what appears to be great legs at the moment might make her a quiet favourite for the time trial. Another time trialling Brit is Hayley Simmonds. She had a quiet 2020 whilst racing for Belgian team Ciclotel and has moved back home to race for CAMS-Tifosi in 2021. Her last race was finishing 16th in the European Championships TT last August.

Team Germany’s Mieke Kröger is another big contender for the time trial. With that stage being so flat, it’s well suited to Kröger who will be able to put the power down. Once upon a time, she used to do the odd sprint as well but I think she’ll be all-in against the clock instead. Team DSM’s Leah Kirchmann would normally be an ideal favourite for this race. A good sprinter with a time trial seems like a good match. However, her form in 2021 is pretty horrible. 100th at Le Samyn and DNF at Strade Bianche. This could be the race to turn it around.