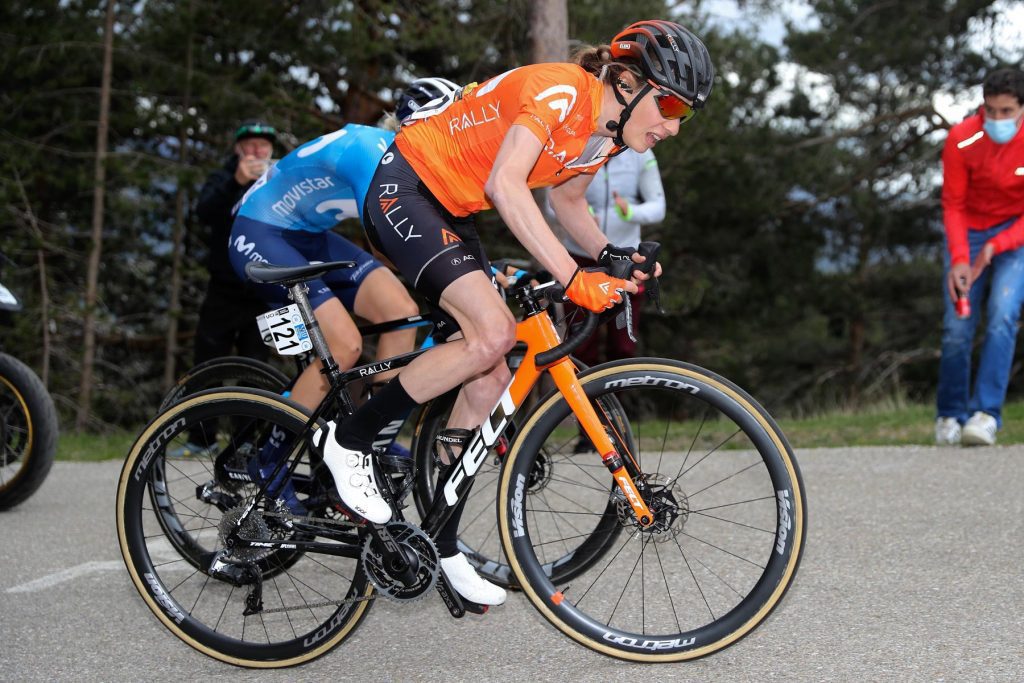 The Vuelta a Burgos has risen quickly in its race level in recent years. The race has a history of being one of the major Spanish domestic level races but became a UCI race for the first time in 2019. That year it was a 2.1 level race and was set to be boosted to 2.Pro level in 2020. Unfortunately that edition was cancelled due to COVID but the rise has continued with the Vuelta a Burgos now part of the Women’s WorldTour calendar. With the big gap left by the Emakumeen Bira’s absence, the Vuelta a Burgos is now the premier Spanish stage race.

This race comes at the end of a period of racing in Spain. Kicking off with the Setmana Ciclista Valenciana stage race and then a host of one-day races to follow. It’s no surprise that the likes of Anna van der Breggen and Annemiek van Vleuten have been in good form. Arlenis Sierra is the other rider to win a race in this period with victory at the Navarra Elite Classic. Yesterday’s Durango Durango one-day race had plenty of climbing involved. Despite an attack by Cecilie Uttrup Ludwig, the Dutch pair contested the win. A quickest of looks at the parcours here shows there’s even more climbing for the riders.

Stage 1 will open up time gaps between the favourites and major gaps to the rest of the peloton. We’ll probably already have an idea as to who the eventual podium will include. The second stage is the calmest stage but anyone vying to spring for the stage win will need to crest the Cat 3 climb in the bunch. With just 20km left after its summit, there won’t be much chance to close gaps. Stage 3 finishes with a punchy climb which will expose tired legs and potentially harm some GC contenders. The final stage will see the queen climb up to the Lagunas de Neila. There is a great opportunity for big time gaps to be closed and opened.

Anna van der Breggen comes into this race as the most in-form favourite. Van der Breggen has recent back to back wins at the GP Eibar and Durango Durango. At the latter race, she looked just that little bit more comfortable on the climbs than Van Vleuten and Stage 3’s finish looks tailor-made for her. Demi Vollering will be a great Plan B and will probably get the shout to contest Stage 2 outright. She was 2nd in Emakumeen Nafarroako and 5th at Navarra, her Liege Bastogne Liege winning form appears to still be there.

SD Worx also have Niamh Fisher-Black who is a natural climber. She battled hard to finish 11th at Durango Durango. She will put work in for the team but could still end up as the best youth rider. SD Worx are using Ashleigh Moolman-Pasio as an attacking card. Also recently finishing 4th at Emakumeen Nafarroako. Moolman will be at the front a lot, putting tough pressure on the peloton.

Movistar’s Annemiek van Vleuten won the Emakumeen Nafarroako but has had to settle for three further podium visits without a win. She’s been commenting that those non-wins have still been good as she’s ridden in an attacking way. Expect that to continue as her team is underpowered compared to the might of SD Worx. She’ll be supported by Katrine Aalerud who was in great form in finishing 3rd at Setmana Ciclista Valenciana. Sara Martin might get a shout on the flatter Stage 2 finish. She’s been 7th at Ronde de Mouscron and 16th at Emakumeen Nafarroako on that sort of parcours this season.

Eider Merino has a great history at the Vuelta a Burgos. The diminutive climber won the 2017 edition and finished 3rd and 4th in the years before that. As the race has grown and the startlist improved, she’s not found the same success. She can still be considered a contender for the top 10 though definitely. Her teammate Arlenis Sierra won the Navarra Elite Classic last week. She must be considered one of the major favourites for Stage 2. Her good form continued with 6th at Durango Durango, even with the climbing involved in that race.

Mavi Garcia is another former winner of the Vuelta a Burgos, winning back in 2016. She was second behind Van Vleuten at the Setmana Ciclista Valenciana. With Garcia eventually finding herself overpowered on the last major climb. She should be in the front group whenever the race goes upwards. Anastasia Chursina will probably get the shout for Stage 2’s finish although doesn’t really have a top result yet in 2021. Tatiana Guderzo will be there or thereabouts across all 4 stages too. The all-rounder will help keep Garcia out of trouble on the mountains and might like the Stage 2 finish.

It’s a little hard to read Elisa Longo Borghini at the moment. She took some time off after the Spring classics but then immediately returned to the podium twice at GP Eibar and Emakumeen Nafarroako. Reports from the team suggest she was surprised to do so well. The podium results were mixed in a more relaxed 37th at Durango Durango, where she dropped backwards quickly. She could continue to surprise herself and do well on GC but probably won’t win.

Trek Segafredo teammate Ruth Winder should be in a similar boat and had her own recent good result with 2nd at the Navarra Elite Classic. It’s muddied further with Lucinda Brand finishing 4th at GP Eibar. Brand was starting to feel her way back into the road peloton in the latter part of the Spring classics, seen on the front animating races and closing gaps. If she continues to climb well here, she could be in the top 10 GC positions.

Cecilie Uttrup Ludwig lit up the Durango Durango race yesterday with a strong long-range attack. She even managed to close up on the Dutch pair at the finale before they took off in the sprint. Her 3rd place there matches her best result of the the season, back at Trofeo Alfredo Binda. The attack might have been an admission that she wouldn’t be able to keep up with attacks from the likes of Van Vleuten and Van der Breggen. Stage 3’s finish is definitely her cup of tea though. Evita Muzic is a good teammate on the climbs for Uttrup Ludwig. She’s been doing well herself with 9th at GP Eibar and 15th at Durango Durango. She’s another who might be able to win the youth jersey.

Soraya Paladin was 2nd overall here in 2019’s race. So far, Paladin’s had a solid 2021 season. With a pair of top-5 results in WorldTour races to show for it. I think the climbs here over the 4 stages will prevent a high GC finishing position but Stage 3’s punchy climb will suit her. Pauliena Rooijakkers gave it a solid go and was 5th at Durango Durango, a few days after finishing 8th at Emakumeen Nafarroako. She might miss the odd move but I’d be surprised if she didn’t finish in the top-20. Sabrina Stultiens is also another useful option for the team. She’s in good form as well, after 10th place at Durango Durango. I’d expect her best result to be on the punchy uphill finish on Stage 3.

Canyon SRAM have a number of options with Kasia Niewiadoma their main one. Her long non-winning stint continues but she remains consistent. Her return to racing after the Spring saw her finish 4th at Durango Durango and do well. In her absence, teammate Mikayla Harvey began to rediscover some of last year’s breakout form. She took 5th at GP Eibar and 6th at Emakumeen Nafarroako. She will be a useful ally for Niewiadoma on the pure climbing stages.

One of Hannah Barnes and Alice Barnes will get the go-ahead to sprint for Canyon SRAM on Stage 2. With the climb on the parcours, I’m leaning slightly towards Hannah as the option. Her 5th at Omloop het Nieuwsblad feels a long time ago so 9th at Navarra Elite Classic was a timely reminder of what she can do. If Alice can get over the climb, she will be a stronger option after winning a sprint stage at the Setmana Ciclista Valenciana this month.

These sorts of races are more to the liking of Ceratizit-WNT’s Erica Magnaldi. After a lot of top-20 finishes without breaking the top-10 in the Spring, she has now finished 7th and 8th in the last week. Magnaldi seems to prefer the longer climbs rather than the punchier efforts and so should do well on Stages 1 and 4. I’d expect to see her in the top-10 of the GC at the end of the race.

Bizkaia Durango’s Sandra Alonso comes into this race as a contender for Stage 2’s sprint. She won a stage at the Setmana Ciclista Valenciana, just pipping Sheyla Gutierrez. She was consistent in the follow 2 days as well, finishing 4th in both finishes.

Rally’s Krista Doebel-Hickok impressed with a long solo break in the Setmana Ciclista Valenciana which set her up to win the mountains jersey there. The rolling parcours of stages 2 and 3 might see a repeat performance from her. She was also 10th at the Navarra Elite Classic since then, possibly making her the team’s option on Stage 2. Clara Koppenburg is the team’s natural climber and loves racing in Spain, finishing 2nd in last year’s Setmana Ciclista Valenciana. Her 2021 form is tough to work out though. She’s been hovering around 40th place before improving to 26th at Durango Durango. I wouldn’t be surprised at all to see her do well on the long climbs here. However, it’s tough to expect it at the moment.

Amanda Spratt has done alright so far in 2021, peaking with 4th place at Amstel Gold. She’s been consistent since then too with 9th, 10th, 10th and 14th places. I think the bottom part of the top-10 is likely where Spratt will finish and she might end up having to work for teammate Ane Santesteban. She has come back into life in the last week racing on home roads. Burgos isn’t far from the Basque Country and she could replicate the 3 top-10 results she’s had. Grace Brown won’t appreciate the large climbs but is a definitely a contender for Stage 2, whether that’s in a sprint or a late solo break.

Potentially drowned out by the other talent on the SD Worx team, Anna Shackley is a natural climber that could do well here. She took her best result of the 2021 season at GP Eibar by finishing 11th. Because of the team pecking order, she might not get an opportunity here other than to work for the leaders but hopefully she can sneak a first top-10 in. Spela Kern has done well here in the past, finishing 4th in 2017 and 16th in 2019. She’s recently done well in 2021 as well. Taking a great finish of 7th at Setmana Ciclista Valenciana. That result was earned largely by climbing well on the first stage and being able to hold onto it. I think she could be in the top-10 after Stage 1 but then slowly drop out of it over the remaining stages.

Barbara Malcotti has been getting closer and closer to the top-10 this season for Valcar. She did well by finishing 26th at Liege Bastogne Liege with the likes of Kristen Faulkner and Brodie Chapman. She improved on that with 17th at GP Eibar and is an interesting outsider option for the climbs. Petra Stiasny took the best result of her young career at the GP Eibar in finishing 19th. The Swiss Cogeas Mettler rider is in her first season in the pro peloton and seems ideally built for the climbing involved in the Vuelta a Burgos.