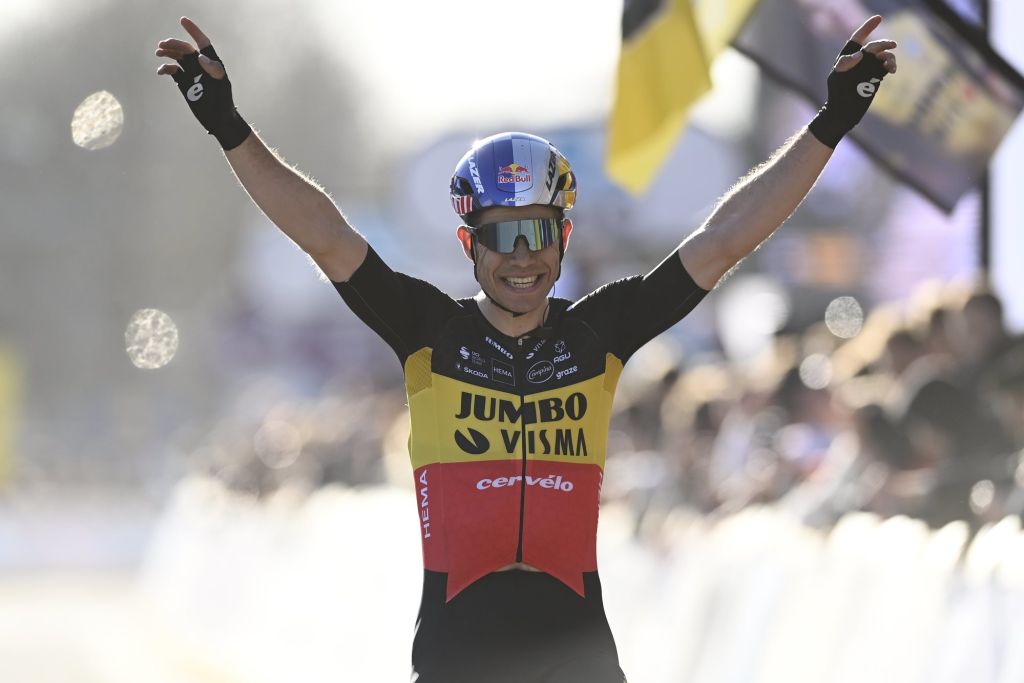 The 2022 Spring Classics season kicked off with Omloop het Nieuwsblad. The men’s race saw the European part of the WorldTour start whereas the women’s race isn’t part of the WorldTour. Despite Flanders Classics applying for Women’s WorldTour status, the UCI declined to add the race in 2022. The Molenberg was the major change to the 2022 route, roadworks on the roads leading to the base of that climb meant the race was unable to use it this year. A number of riders had to abandon pre-race on Saturday morning, Tim Wellens and Sep Vanmarcke the major casualties.

There was a narrative going around before Omloop het Nieuwsblad that Wout van Aert wasn’t a great cobbles rider. It wasn’t so much the skills to ride the cobbles, which we all expect to be there from the elite cyclocross background. But Van Aert hadn’t won a major cobbled race so far in the eyes of the critics, depending on your view on whether Gent Wevelgem counts. That’s now definitely been ticked off but you suspect they won’t be happy until Wout wins the Tour of Flanders.

It’s an iconic climb and its previous position as the decider for the old route of the Tour of Flanders gives those cobbles huge prestige. With the Omloop using a similar route, we didn’t see any rider really make the Muur their own this year. Without the distance and sheer volume of climbing before the Muur van Geraardsbergen of the old Flanders, it seems that the modern pros aren’t finding it all that selective. Arguably the Bosberg would probably be in the same boat today but surprisingly, the peloton let the big pre-race favourite disappear off into the distance.

Victor Campenaerts had the ride of the day

With a solo attack winning the day, it probably feels odd to choose the rider who finished 5th. It was a tough day for Victor. He got two punctures and also crashed on Holleweg – his elbow missing skin as a result. Then Campenaerts changed bikes after the shifting was compromised. So to get back into the peloton each time and still be able to follow over the Muur and Bosberg was super impressive. He was so close to going with Van Aert before the Bosberg, maybe on another day without the bad luck, he might’ve been able to join the move.

Annemiek van Vleuten reminded people that she can sprint

Heading into Ninove, Annemiek van Vleuten was pushing on with Demi Vollering sitting on her wheel not working. We know that Vollering can sprint after her wins at Liege Bastogne Liege and La Course last season and it seemed a done deal. After 10km+ on the front, you couldn’t see Van Vleuten having the legs to outsprint a seemingly fresh Vollering. But Van Vleuten is a wily competitor. With a cross-tailwind, Van Vleuten hugged the side of the road denying some of the draft to her rival. When it came down to it, Annemiek sprinted early, stealing a march on Vollering who was never able to come past.

SD Worx are carrying a tonne of emotion

Vollering was upset after crossing the line, which initially felt like the disappointment of losing a race that looked like it was in the bag. In the post-race interview, she said that she thought she’d got it won when she came out from behind Van Vleuten but the legs just didn’t have anything left to give. Also, the team really wanted to deliver this first win of the season for Amy Pieters. Without understating things, it’s a tough situation for the team and they really wanted that symbolic win. Tomorrow’s Omloop van het Hageland probably isn’t where they will open their account, so they may have to wait until Strade Bianche.

Edit: Lotte Kopecky will now start instead of Christine Majerus who has a close contact – that changes things for Omloop van het Hageland

Anna Henderson is going to win a big race this season

When Marlen Reusser attacked on the Leberg, Ellen van Dijk and Liane Lippert were straight on her wheel. After a short delay, Anna Henderson bridged across and the quartet stayed away over the Muur and Bosberg. To see a rider that only a few years ago I was able to see racing around Redditch town centre cresting the Muur van Geraardsbergen in such elite company was huge. The gap ebbed and flowed a little but she continued to get back on. When the second group behind Van Vleuten & Vollering stopped working and were caught, Henderson still had a sprint to give and finished 7th. The progression is there and it feels like we’re going to see Anna Henderson win a Women’s WorldTour race in 2022.