The number one ranked Women’s WorldTour team has added one of the top women finishers to their roster.

Trek-Segafredo is ready to roll out the red carpet for Australian sprinter Chloe Hosking. The Australian sprinter, whose signing was announced in October, has yet to join Trek-Segafredo in person, but is no stranger to her new teammates. Or the Women’s WorldTour. “I’m really honoured for such a welcome. I’m going to race with a team that has shown that it’s super versatile and able to win in many different ways,” said Hosking.

Chloe Hosking first made the leap to Europe and the women’s pro peloton when she was 18 years old, a courageous move. “One of the most amazing things I’m most proud of is jumping on that plane when I was 18 and having no idea what was coming for me. Just diving headfirst into professional cycling and building a life and a career for myself in Europe,” Hosking said.

Hosking is entering her 12th professional season and has accumulated 37 wins in some of the biggest races on the UCI calendar: La Course, Boels Tour, Tour Down Under, Tour of Norway, Tour of Britain and Madrid Challenge – as well as gold and bronze medals in the Commonwealth Games. Her desire, of course, is for more.

My goals for the season are pretty simple: winning sprints. That’s what I’ve been brought on the team to do, and that’s where my training has really been focused.

“I’m really proud of my career, but there’s still races I want to win and have an impact on. That’s why I’ve signed a two-year contract with Trek-Segafredo – because I’m not done yet. My goals for the season are pretty simple: winning sprints. That’s what I’ve been brought on the team to do, and that’s where my training has really been focused,” exclaimed Hosking.

Trixi Worrack, Ellen van Dijk, Ina Teutenberg (Team Highroad), Elisa Longo Borghini, Audrey Cordon-Ragot and Giorgia Bronzini (Team Wiggle) have all been teammates with Hosking. Seemingly a small detail, but one that can make a difference.

“I’m really excited to rejoin a lot of my former teammates. With them, I have gained some of my best results. It’s great to join a new team and feel so familiar. Even though I missed the January camp due to the very strict quarantine laws we have in Australia, I won’t feel like an unknown rider,” Hosking added.

“And I’m really looking forward to collaborate with Ina and Giorgia,” she continued. “I’ve been with Ina for the first three years of my professional career; she was my mentor and took me under her wing. So, yeah, working with her again is something I’m looking forward to, and the same goes for Giorgia, with whom I had a great relationship in the Wiggle team.” 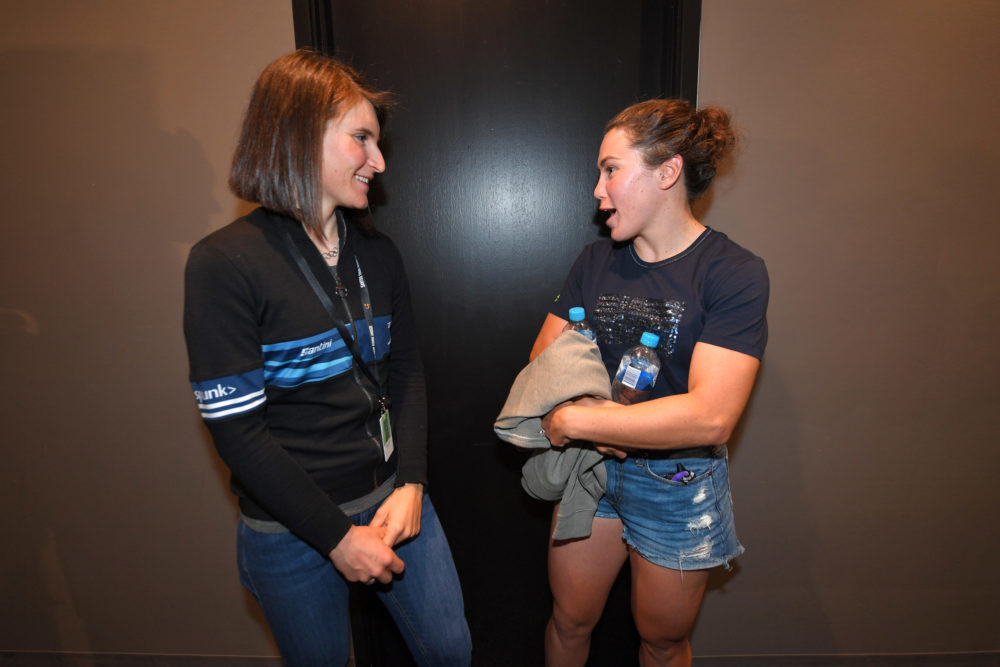 Elisa Longo-Borghini and Chloe Hosking chat ahead of the 2019 Tour Down Under Press Conference.

There’s no denying the Trek-Segafredo women had a stellar 2020 season. In their second year of existence, they won the 2020 Women’s WorldTour, finished one-two in the individual rankings with Lizzie Deignan and Elisa Longo Borghini, and cultured a team who raced aggressively and didn’t care who won – as long as it was a Trek-Segafredo jersey crossing the line first.

The chemistry is noticeable in the Trek-Segafredo team. It’s something all teams desire but not easily attained. Adding new members, even established ones like Chloe Hosking, needed to be done with careful consideration.

“We all know Chloe,” said team leader Lizzie Deignan, “she’s a big character, and we’re a team of strong, big, charactered women, and we enjoy being around people with strong personalities. I am sure she will fit in really well.”

With Letizia Paternoster focused on Olympic track preparation and Lotta Henttala joining Ceratizit-WNT Pro Cycling, Trek-Segafredo had a hole to fill in the roster. The signing of the Hosking has given the team a more complete arsenal. Whereas last year the goal was to foil the sprinters now, with Hosking, Trek-Segafredo can join in on their hectic game.

“From a team-tactic perspective, we are all delighted to have her,” said Deignan. “It was difficult in some races to go in without a sprinter. It meant we had to be aggressive in every single race looking for a breakaway, and sometimes that can be tiring. It will be nice to go into a race and focus entirely on the sprint, and we can work on our leadout. I think we have a good leadout, and we just need a sprinter to finish it off.”

And that’s something Hosking is on board with, too: “I’m happy to put my experience and skills at the disposal of the team to look for more and more wins. Trek-Segafredo is not only the best woman team in terms of results but also for mentality and organisation. This motivates me a lot.

“Even though I have been around for such a long time, I feel like I’m still haven’t achieved my full potential. But now I know I’ve got the right team around, the one that can help me to elevate to that next level. I’m so proud and excited for this opportunity.” 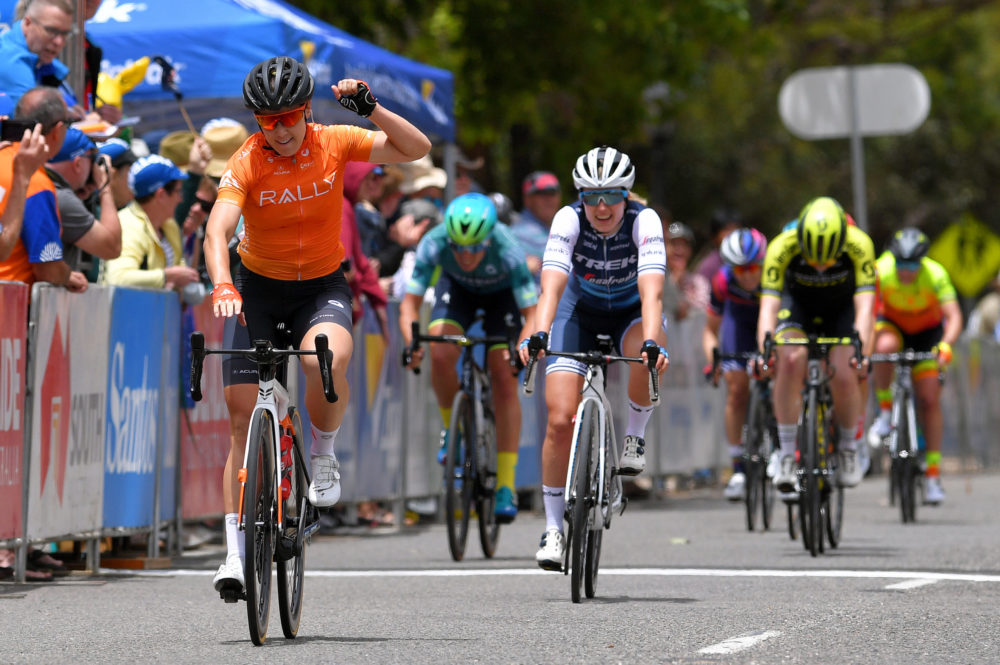 Chloe Hosking won Stage 1 of the 2020 Tour Down Under ahead of Lotta Henttala.

Currently, Hosking is in Australia preparing for the season and will race the upcoming National Championships with teammate Lauretta Hanson before making the long flight to Europe. Like everywhere, the pandemic wreaked havoc on the Australia racing season, and Chloe is not banking on defending her criterium title on Feb. 5th.

“My Australian summer was a bit different this year, with a lot of things being postponed or cancelled,” she said, “so not so much racing, but a lot of base [miles]. Those early season races were a way to fine-tune the form and gave a good benchmark, whereas now there are a lot more question marks. It has been a very different build for me. I’ll be heading to Europe with a bit more apprehension this year but at the same time recharged and confident that I’ll be ready.

“For these reasons, I really don’t know what to expect for the National Criterium. It will be my very first race, and my training is very much behind where it normally is at this time of year. So, it’s not the time to make any claims for the race. But I’m a race car, and I’ll go in and give it my best shot,” she smiled.