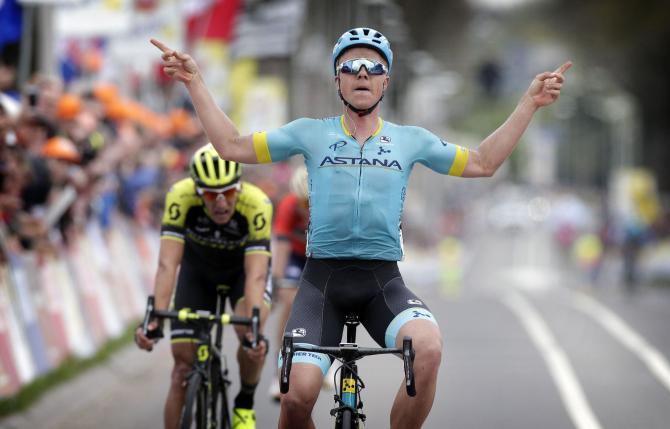 Sunday’s Amstel Gold Races see the men and women take on the hilliest part of the Netherlands – the enclave of Limburg tucked away in the very bottom corner with Belgium and Germany on either side. The men’s race is one of the major classics, although not a monument. The women’s race originally started in the early 2000s with a few editions but then stopped – it was revived in 2017.

The Amstel Gold Race is definitely hilly. The most famous of which is the Cauberg which was the final climb with the finish line at the top between 2003 and 2016. It’s featured in the Tour de France and the Vuelta a Espana and also 5 World Championship road races. Since 2016, the men’s finish now takes place near the top of the Cauberg but comes at it from the other side. This means there’s now a long steady flat road to the finish line which has seen riders having to sprint perfectly to win.

.Last year Michael Valgren won after creating a gap with Roman Kreuziger and Enrico Gasparotto to the pre-race favourites behind. All 3 riders are on the same team for 2019. Last year’s women’s race winner was Chantal Blaak who again outsprinted a small group who had got themselves clear.

Philippe Gilbert is an obvious favourite after his win at Paris-Roubaix last weekend. That stunning ride was the highlight of a Classics season where he’s been working for others. It may work out that way in this year’s Amstel Gold too with DQS teammate Julian Alaphilippe the out and out favourite. There were question marks after he crashed out of the Tour of the Basque County around a week ago but his 2nd place in yesterday’s Brabantse Pijl should put those to bed. If he can finish off this race in the same way he sprinted to win Milan-Sanremo, he’s a lock.

Last year’s podium now all find themselves on the same team but with barely any results to speak of in 2019. Dane Michael Valgren won in 2018 but his best result in the 2019 Classics is 29th at Dwars Door Vlaanderen. I would struggle to say with confidence that he would top-10 in 2019 but could surprise with the #1 on his back. The veteran Enrico Gasparotto seems to come alive for this race – twice a winner on the old Cauberg finish in 2012 and 2016. He has at least shown some form with 7th place at Brabantse Pijl this week. Romain Kreuziger won Amstel Gold back in 2013 and last year’s 2nd place was comfortably his best result there since. 15th in Brabantse Pijl shows a hint of form but he’s probably the weakest prong in the on-paper strong Dimension Data trident.

World Champion Alejandro Valverde will be showing off his rainbow stripes in the Ardennes this year. Despite 9 wins at Fleche Wallonne and Liege-Bastogne-Liege, he’s never won Amstel Gold – instead, he’s finished in the top-5 on 5 occasions. He’s been a competitor in the earlier classics with 7th at Sanremo and 8th at the Ronde van Vlaanderen. Being able to add this race to his palmares will be a massive goal for 2019.
Michal Kwiatkowski won the 2015 Amstel Gold on the old finish and was 2nd in 2017 on the new finish – losing out to Gilbert in a sprint. He’s someone who can outsprint many similar riders, as shown when he won Milan-Sanremo by beating Alaphillipe and Sagan in 2017. He was on the Sanremo podium again this year and 3rd overall at Paris-Nice. He’s not raced since he crashed out of the Tour of the Basque Country however.

Michael Matthews found himself in the winning break of 4 at Brabantse Pijl this week but found himself squeezed again the barriers in the sprint to finish 4th. He’s finished 3rd and 5th in Amstel Gold before but only 10th and 24th on the new finish. In theory, if he makes it over the last climb with a group, he should be able to out-sprint nearly everyone else. Also of that ilk is Peter Sagan who should be a favourite but isn’t having a spectacular 2019 against his own high standards. 5th in Paris-Roubaix would be a good result for most, along with a 4th place at Milan-Sanremo. The rumour is that he’s lost weight this season for a serious attempt at the Ardennes classics so Amstel Gold may be where we start to see evidence of this.

In a similar boat to Sagan is Greg Van Avermaet who seems to be marked out the later classics races in 2019. It started off well with 2nd in Omloop het Nieuwsblad and 6th at Strade Bianche, but ever since the 3rd at E3 BinckBank he’s struggled to break the top-10. He’s got a best finish of 5th in Amstel Gold but only a high of 12th on the new finish. Tim Wellens made the final group at Brabantse Pijl this week, finishing 3rd. He’s another who started well with 3rd at Omloop het Nieuwsblad and 10th at Strade Bianche. These upcoming hillier classics will suit him more but the lack of a top-drawer sprint means he’ll have to try and reach the finish solo to win. He should be good for a top-10 like last year though.

Jakob Fuglsang is in great form. He finished 4th overall at the Tour of the Basque Country and 3rd overall at Tirreno-Adriatico (with a stage win too). He also won the Overall at the Ruta del Sol and finished 2nd in Strade Bianche. He was 8th last year on the new finish of Amstel Gold and whilst he should get over the climbs fine, it’s the sprint that could be an issue to him winning. He’s a genuine shot for the podium though. Finally, sensation Mathieu van der Poel will be racing for the first time. He’s announced his presence by winning GP Denain, Dwars Door Vlaanderen and Brabantse Pijl this season. He’s made himself a strong favourite for every race.

Boels-Dolmans have a combination of Chantal Blaak and Anna Van Der Breggen. They’re the previous two winners of Amstel Gold. For both, the year they haven’t won this race, they both finished low down – 11th and 38th respectively. Blaak won Omloop het Nieuwsblad earlier in the Spring, finished 2nd at Ronde van Drenthe and has generally been bouncing around the lower reaches of the top-10. Anna Van der Breggen has had a quiet spring, seemingly focusing on the hillier Ardennes races. She was 11th at Omloop, 9th at Strade Bianche but seemed to not be too interested in the recent Healthy Ageing Tour; bar the TT where she was 3rd.

It’s impossible to ignore Annemiek Van Vleuten. She’s finished 4th and 15th previously in Amstel Gold. So far in 2019 she’s raced 4 times and finished 1st, 2nd, 4th and 7th – very high consistency! An obvious favourite, she’ll be up there near the finish. Sunweb’s Lucinda Brand was 2nd in Amstel Gold last year. After a quiet start to 2019, she’s come into life during Flanders week with 3rd place at Dwars Door Vlaanderen and 9th in the Tour of Flanders. If she’s still got that form she’ll finish equally highly.

Canyon-SRAM has the pair of Katarzyna Niewiadoma and Alexis Ryan. Niewiadoma is a previous podium finisher and has quietly been doing well in 2019. 3rd place in Strade Bianche led to 6th place at the Trofeo Alfredo Binda. In Belgium, she finished 10th and then 6th at the Dwars Door/Flanders combination. Suited to hillier one-day races, she can make the podium again. American Alexis Ryan was 5th last year. She started the season off well with 5th in Omloop het Nieuwsblad and 4th in the Drentse Acht van Westerveld. In the more recent races, she’s struggled however with very low finishes – a longshot who could come good.

Trek have their own pairing. Elisa Longo Borghini has a 5th and 12th place in the last two editions of Amstel Gold. She’s had a so-so season so far with quite a few low finishes but also highs of 8th place at Dwars Door and 5th at the Cadel Evans Road Race back in Australia. She’s teamed with Audrey Cordon-Ragot who has a very similar record, just finishing 6th instead of 5th and also 12th. She’s had a similar iffy season but with the high of winning the Drentse Acht van Westerveld shining through. She’s not known as a sprinter which may hurt her chances if she’s up there at the end of Amstel Gold.

Someone who is known as a sprinter is Coryn Rivera who blew a golden chance to win Brabantse Pijl this week after her teammates did all the work to get her to the finish line in perfect condition. She still finished 3rd but it really should have been a win. She struggles compared to some others when it comes to the hilliest races so hopefully, the fact she was in the main group at the end of Brabantse Pijl is a good sign of form.

Marianne Vos doesn’t have the best results at Amstel Gold despite her glittering career, she finished 10th previously. With a win at Trofeo Alfredo Binda this season she should be up there in this race. She missed the winning move at Brabantse Pijl though this week and despite using a teammate was unable to close a minute’s gap (although that’s a tough ask). She’ll be tough to ignore for the top-10. She’ll be assisted by teammate Ashleigh Moolman who has finished 9th in Amstel Gold previously. She did well in the Italian Classics this season finishing 6th and 12th. A hillier race suits her and she’ll be a useful foil for Vos.

Bigla have the 3rd place finisher from the Tour of Flanders – Cecile Uttrup Ludwig. She’s been in great form in hillier races with 5th at Strade Bianche and 3rd at the Trofeo Alfredo Binda. She can definitely get herself in the final group again but her lack of sprint relative to others may stop her getting the win.

Sonny Colbrelli is a previous podium finisher but his 2019 form has been iffy since winning a stage at the Tour of Oman. He’s been largely absent in the Classics with only a result of 13th at E3 BinckBank to show. Jelle Vanendert finished 2nd twice on the old finish but also managed 10th on the new finish last year. At 34 his best chances may be behind him but he can certainly break the top-10 again.

Sergio Henao has finished 6th at Amstel Gold on both the old finish and the new finish. Now racing for UAE in 2019, he should have a stronger team with other outsiders Rui Costa and Diego Ulissi working together but ultimately that lack of sprint will hurt Henao’s overall chances.
Lawson Craddock was 9th last year and would hope to repeat that. Also on Team EF is Tour of Flanders winner Alberto Bettiol who kept his strong form going with 6th in this week’s Brabantse Pijl.

Ordinarily, Liz Deignan would be a favourite, but she’s not raced since 2017. In the meantime, she’s had time out in order to start a family. If she comes back at the same ability, she would be a high finisher but she’s an unknown condition wise. Amanda Spratt will be working for Van Vleuten but has been on the podium here before. Since the Australian races her 2nd place at the Trofeo Alfredo Binda is the only real high point.

Ellen Van Dijk could end up being the Trek leader she won Dwars Door Vlaanderen was 5th at the Tour of Flanders but has a worse history at Amstel Gold itself. She’s race a lot in the Classics this year but if her form holds she’s a real contender.
Park Hotel Valkenburg’s Sofie De Vuyst will be on the sponsor’s home turf – the Park Hotel itself is at the top of the Cauberg. Her win at this week’s Brabantse Pijl is a huge career result.