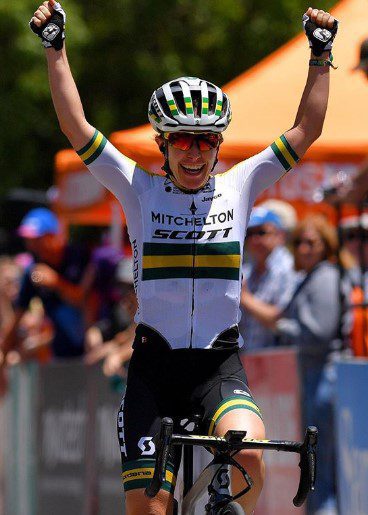 The 2022 Cycling World Championships take place from September 17th to 25th around the city of Wollongong, 80km south of Sydney in Australia. The course contains plenty of climbing, with it expected to be too tough for pure sprinters but probably ideal for riders who can sprint and climb. The home Australian cycling federation has announced its line-ups for the women’s and men’s senior races. The women’s team has 6 riders qualified as part of their ranking-associated quota. They also get a 7th rider, Josie Talbot, thanks to winning the Oceania continental championship. The men’s team gets 8 riders from their ranking placing.

“It’s always an honour and privilege to wear the green and gold, so I am so excited to be named in the team for my 10th World Championships.

Even more special is that it is a home World Championships that covers roads I grew up training on.”

Amanda Spratt has the best results at the World Championships from this team selection, with silver and bronze medals in her collection. Teammate Georgia Baker was successful at the Commonwealth Games, taking the gold medal, with Sarah Roy the bronze on an easy course in Warwick. The likes of Grace Brown, who was just 3rd in the GP de Plouay and Alex Manly, Tour of Scandinavia stage winner, will give the team plenty of firepower. Brodie Chapman comes off the back of a strong season and will be used in both attacks and managing the peloton. Josie Talbot is maybe the weakest member of the team on paper but is the only one who auto-qualified by becoming the Oceanian champion.

The selection is not without controversy. There were 2 appeals for a late addition to the team but they were unsuccessful. The riders who appealed haven’t made themselves known at this point. The likes of Neve Bradbury, Rachel Neylan, Ruby Roseman-Gannon, Chloe Hosking, Sarah Gigante and TIffany Cromwell may feel hard done by to miss out on a home World Championships. For Bradbury and Gigante it’s a missed chance to win the first U23 Worlds jersey and a new opportunity to wear the rainbow bands. Bradbury has had a breakout season, finishing 10th at the GIro Donne and 5th at the Tour of Scandinavia. Sarah Gigante won the Emakumeen Nafarroako but has had injury issues from a concussion for a large period since. Unfortunately, missing a chunk of racing has seen her miss out on the Commonwealths and now the Worlds.

The big name missing from the men’s team is Caleb Ewan. The Lotto-Soudal rider has been quite vocal to the media about his disappointment in not being chosen to take part in the World Championships road race in Wollongong. Ewan doubled down on suggesting he should’ve been picked by winning a stag of the Deutschland Tour this week, the same day he confirmed he wouldn’t be taking part. It’s been an off-year for Ewan, who failed to win a stage in either the Giro d’Italia or the Tour de France, before an injury took him out of the Commonwealth Games.

“This one felt really good! Especially after the bad news that I won’t be at my home world championships this year.

To be honest I don’t have much to say on the matter other than I’m heartbroken I won’t be there to represent my country and that I believe I deserved to be there. Anyways, sob story over.”

With no Ewan, it feels like the Australia men’s team will be behind either Jai Hindley or Michael Matthews. Matthews is the best-recognised sprinter on the teamsheet whereas Giro d’Italia winner Jai Hindley will cover any moves made on the hills.