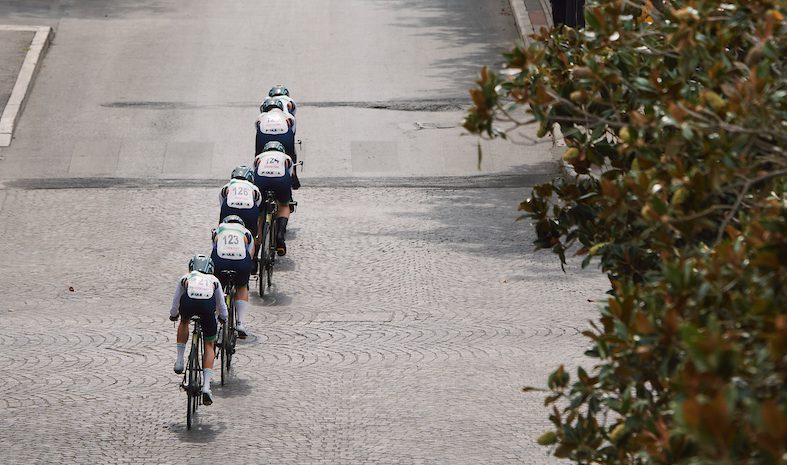 Équipe Paula Ka brought its Giro Rosa campaign to a close over the weekend after an impressive week and a half of racing in Italy.

In the opening team time trial, the young Swiss squad stopped the clock faster than 6 of the 8 WorldTour teams in attendance, to take fourth place on the stage and put Emma Norsgaard Jorgensen into the best young rider’s jersey. The following day saw Mikayla Harvey keep the white jersey within the team, after finishing seventh, among the pre-race favourites, on a gruelling stage that already saw significant time gaps emerge. The New Zealander remained in the young rider’s jersey on Stage 3 following an impressive display of teamwork to maintain her fifth position in the general classification, which also saw Elise Chabbey make her way into the top ten overall.

The following day, however, was one of the undisputed highlights of the nine-day stage race for the team, with Lizzy Banks providing a sense of deja vu to last year’s race, as she took the victory after attacking from the breakaway. The British rider outshone a high-class field of competitors on Stage 4 to take the win on the longest stage of this year’s race in spectacular fashion. This day also saw the squad take the top position in the team classification, a ranking that they would continue to maintain over the following stages.

A fast and furious stage followed the next day, which resulted in Elise and Mikayla maintaining their top 10 positions overall, with the young New Zealander still defending the white jersey, and the team continuing to lead the team classification with 1:18 minutes over the second-placed squad, and 8:04 on the third-placed team, and retained two riders in the top 10 overall.

On the penultimate stage, Mikayla took an impressive third place on a day that yet again saw further time splits emerge among the GC favourites. Despite a challenging parcours and an ill-timed mechanical, the young rider was able to hold her own against the big names of the peloton to consolidate her fifth place overall and add almost a minute to her lead in the white jersey competition.

The final stage brought yet another strong performance, this time by the New Zealand road champion, Niamh Fisher-Black, who took second on the stage, after only narrowly missing out on the top spot, an outstanding performance by the young rider, competing on the biggest stage in her career so far.

This year’s edition of the prestigious Italian WorldTour race featured a significant amount of climbing and required solid teamwork, strong tactical manoeuvring and a well-thought out game plan. The team arrived in Italy up to the task, and brought just this to the race, producing several standout and also breakout performances, particularly of our young riders. With Mikayla Harvey’s young rider’s jersey and fifth place overall, Lizzy Banks’ stage win, as well as podium places on the final two stages, the team’s performance at the Giro Rosa has been a memorable one. There is no doubt that the riders’ consistent hard work during individual training sessions and at team camps, the dedication of the team staff, and the guidance of team management, came together to make such an accomplishment possible. The team now shifts its focus to the World Championships in Imola, with the aim of continuing this successful racing momentum in Italy.