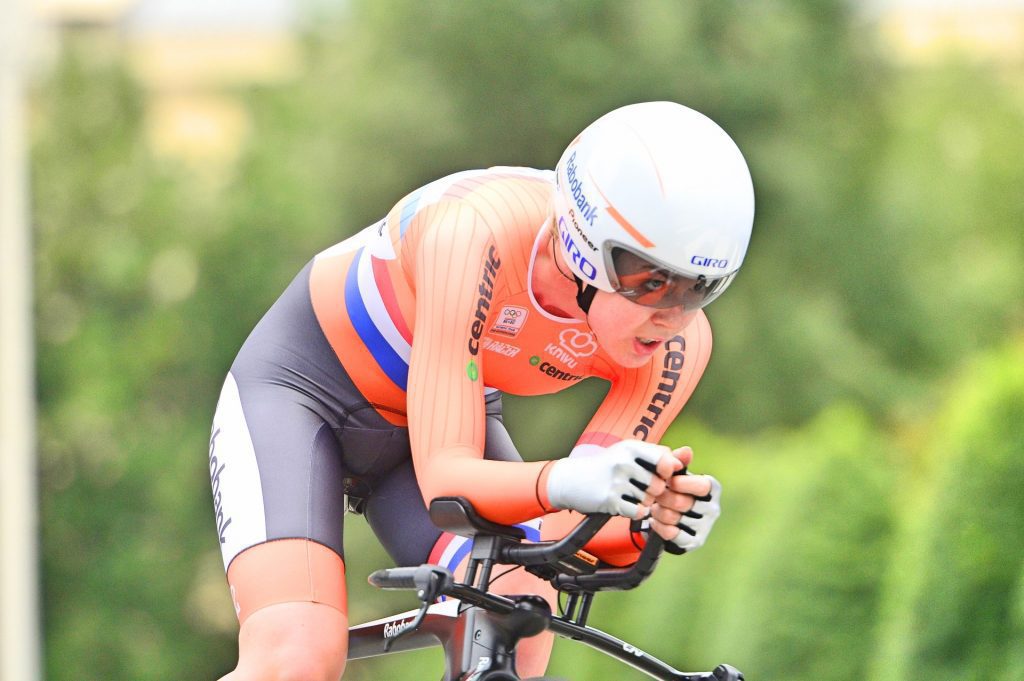 The European Championships is a relatively new race at Elite level. It’s taken place since 2016 in its current form but previous was open only to U23 and Junior races. 1995 was the first year for any race, for U23s in Trutnov in Czechia. As the European Championships developed, Juniors were added to the programme in Moscow for 2005. Even with those limitations, the winners list here is almost a who’s who list. Names like Schleicher, Kupfernagel, Ljungskog, Worrack, Vos, Lelivtyte, Blaak, Stultiens, Niewiadoma and Balsamo have all won the road race. On the TT side of things, you’ve got Ziliute, Brandli, Zabelinskaya, Vilumsen, Van Dijk, Van der Breggen and Kroeger as previous winners.

The 2021 European Championships will be taking place in Trentino in Italy. The area was originally due to host the 2020 European Championships but due to COVID, deferred a year. Despite being based in a mountainous area of Italy, the women’s races look tamer that they could’ve been. The time trial looks surprisingly flat with only one minor undulation. The road race sees riders take on 8 laps of a 14.8km circuit with the Povo climb the centre of each lap. It’s not the worst climb going but it will be attritional through the course of the race with 3.6km at 4.7%.

Ellen van Dijk won the first 4 editions of the European Championship time trial but missed out to Anna van der Breggen last season. Van Dijk still finished 2nd though, which isn’t a bad ‘worst result’ to have at a race. The flat parcours here will really suit her and with this as a goal race, she will be focusing on doing well.

Marlen Reusser is probably the major competition for Van Dijk and is in great time trialling form in 2021. She just finished an impressive 2nd in the uphill TT at the Ceratizit Challenge, where many expected her to lose more time. Reusser won the TT at the Simac Ladies Tour (ahead of Van Dijk), was 2nd behind a dominant Van der Breggen at the Olympics and easily took the Swiss National title again. The form is there and she will want to add this race to her growing palmares.

This flat time trial will give Lisa Brennauer a chance as well. She’s not got massive headline results in time trials this season but that’s mainly down to the parcours. The only truly flat time trials she’s done were the road bike TT in the Healthy Ageing Tour (3rd) and the Germany Nationals (1st). She was well down in the uphill TTs at the Giro Donne and Ceratizit Challenge. Brennauer did finish 6th on the rolling Olympics course, behind Reusser who may beat her here.

After the fun of the Olympics, the Dutch have usually been more successful in the European Championship. They’ve won 4 of the 5 editions held for Elite riders. Marianne Vos will forever be a race favourite. She won the 2017 race in a sprint against Giorgia Bronzini and almost retained her title in 2018. Vos had a great week at the Simac Ladies Tour, taking 3 stage victories. Other nations will try and drop her on the climb but that’s a tough ask. The issue will be who the team races for, Vos or Demi Vollering. It feels to me like Vollering might get the nod as her climbing is a little better. She hasn’t won since her big victory at La Course at the end of June. But has been consistent with 3rd Overall at the Giro Donne and staying out of trouble to finish 5th at Simac. She will deal with the climb easier than Vos and the balance may swing to her. It’s always impossible to ignore the threat from Annemiek van Vleuten. The climb isn’t going to be tough enough for her to just drop riders at will. But as we’ve seen at the Ceratizit Challenge, you can never ignore the potential for a long solo effort.

If the race comes down to a sprint then Lotte Kopecky will fancy her chances. She’s show that she can get over climbs like the Povo here and still have a fast finish. After crashing in the Olympics, she put off her return to the peloton until the Ceratizit Challenge. Here Kopecky showed she’s still in great form, taking a stage win on the final day after 3 tough days of racing. She’s also the undisputed leader on the Belgian team which will help her.

As well as being a favourite for the time trial, Lisa Brennauer also has a chance in the road race. The race will need to not get too broken up on the Povo climb but she’s regularly shown that she’s got a fast sprint against a reduced group. If the race does get tough on the climb, then the German puncheur Liane Lippert will switch to being the team’s best shout. It doesn’t feel like Lippert has quite had the same great season as 2020 but it’s not been bad by any stretch. Despite taking no wins, she’s still notched up plenty of Top-10 results. Her 2nd place finish at the Ceratizit Challenge is encouraging. We’ve also seen Lisa Klein do well this year. She won the Baloise Ladies Tour in July, taking 2 stage wins along the way. She normally prefers short, sharp climbs so the long repeated effort might see her drop from contention.

Cecilie Uttrup Ludwig will be the main shout for Denmark. She’s been climbing well and her sprinting appears to have come on in 2021 as well. She crashed out of the Simac Ladies Tour though and skipped the Ceratizit Challenge as a result. Hopefully skipping that race has allowed her to recover in time. She normally does best in an uphill finish but 2nd at La Course after a hard race showed she can sprint well on the flat against similar riders.

The Italian team has a few different ways of winning on home roads here. If it comes down to a decent sized bunch sprint then Elisa Balsamo will get the nod. She got a pair of top-10 results in Spain this week which shows she may be able to contribute to the finish of a hard race too. Elisa Longo Borghini took a great solo victory at GP de Plouay recently and almost stayed away to win the final stage at the Ceratizit Challenge too. That means Longo Borghini is looking like she’s in the form she had at the start of the season again. She can animate the race and take some of the pressure off teammates back in the peloton with a break. Marta Cavalli is another major option. She’s been climbing really well in 2021 and still has a sprint at the end of races too. She got what was her first Women’s WorldTour podium result in Spain, a surprising fact considering how well she’s raced! She’s got a habit of finishing 4th in big races, but hopefully she can make the podium again.

Juliette Labous has been in good stage race form recently, finishing 7th at the Giro Donne and 8th at the Tour of Norway. She was looking in good form at the Ceratizit Challenge by finishing 6th in the uphill TT but then unfortunately crashed out of the 3rd Stage. That means there will be question marks for the French climber.

Pole Kasia Niewiadoma continues to not quite win a race in 2021. She finished 6th at the Ceratizit Challenge, not quite able to stick with Van Vleuten but comfortably there with the rest of the peloton. She could’ve won recently in the Simac Ladies Tour but went a touch too early and Marianne Vos came round at the finish. This parcours will see her finish up there again but the flat sprint finish will probably prevent her from winning.

The Swiss rider Marlen Reusser has a good chance of coming into the road race as a European champion already. She’s been in career-best form since the Olympics where she picked up a silver medal. She climbed well in Norway to finish 4th there, then won the Simac Ladies Tour TT and finished 2nd in GC. She was super impressive in Spain though, winning from a break on Stage 1, then barely losing any time to Van Vleuten on the mountain TT. She finished 2nd overall there too. Her best shot here is probably from a break.

Elise Chabbey is in a huge vein of form at the moment, finishing 3rd Overall at the Ceratizit Challenge. She’s not quite on the same level on a TT bike has her Swiss teammate Marlen Reusser but she can still possibly claim a spot on the podium on the right day.

Lisa Klein is often second to her German teammate Lisa Brennauer but in the flat 2019 European Championships TT in Alkmaar, Klein was 2nd behind Van Dijk. Klein was recently 4th in the TT at the Simac Ladies Tour, behind Reusser and Van Dijk. She could be a sneaky bet for the final podium spot ahead of Brennauer.

After the Olympics, we can’t fully rule out Anna Kiesenhofer. Her incredible performance there definitely didn’t go unnoticed though. I can even picture her trying the same move, attacking from the gun but the peloton won’t give her free reign again. The climb probably isn’t tough enough for her to power away but who knows, lightning might strike twice!

Slovenian Eugenia Bujak is quietly in good form too at the moment. She had to support Marlen Reusser’s GC ambitions at the Ceratitizt Challenge but went into that race after finishing 6th at the lumpy GP de Plouay. If she can hang with the bigger names, there’s a chance she can sprint at the end into a strong top-10 finish.

French rider Gladys Verhulst will be ready to step up if Labous isn’t fully fit. She’s another who did well at GP de Plouay, taking her first WWT podium result with 2nd place. She’s got confidence at the moment after finishing no lower than 12th in races since mid-June.

It’s felt like the Norwegian Susanne Andersen has been pushed down the pecking order a bit at Team DSM this year. She’s had a couple of opportunities at smaller races but recent WWT 2nd places in Norway and the Simac Ladies Tour will give her renewed confidence. She’s always been able to get over rolling terrain and then still have a sprint at the end, which will be useful here.

Probably the best back-up option for the Polish team is Marta Lach. Niewiadoma will be the undisputed leader, but Lach is in great form too after winning La Picto-Charentaise. You can envision a scenario where she gets over the climbs and then is given the nod in a final sprint over Kasia.