Flashback to the 2018 La Course by the Tour de France 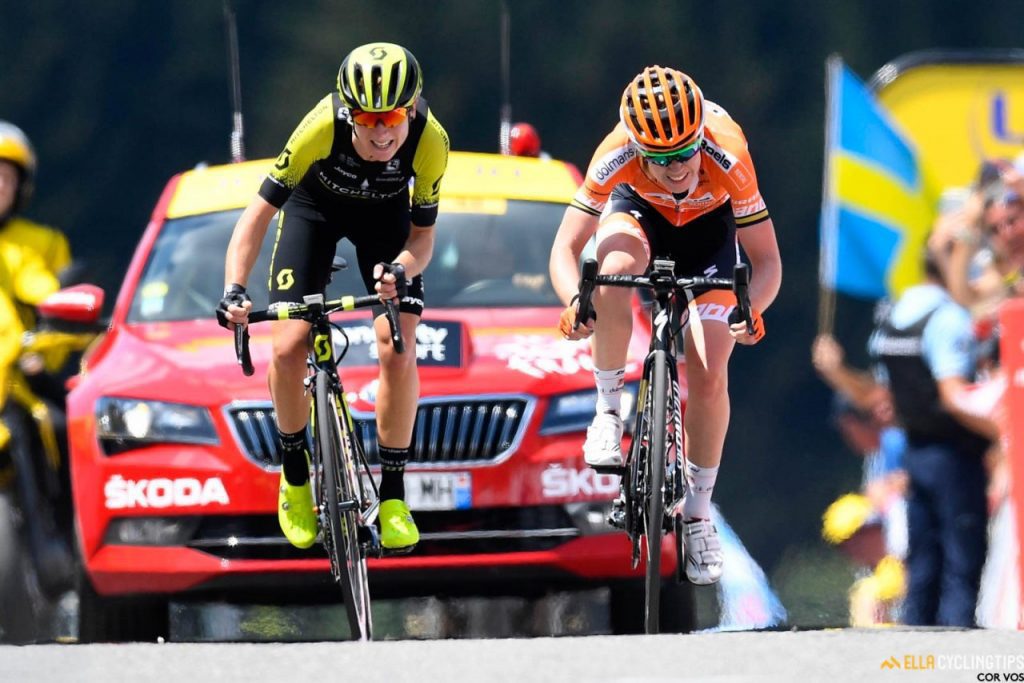 For the 2018 La Course by the Tour de France, a similar mountainous race to 2017’s race was put forward. The first 3 editions were raced on the same finishing course on the Champs Elysees as the men’s race. 2 of those 3 races had ended with a bunch sprint, only Anna van der Breggen’s solo win in 2015 stood out.

2017 saw the race take on the Col d’Izoard before the second stage in Marseille. The second stage was a pursuit race and didn’t count as an official UCI race. With or without the 2nd stage, Annemiek van Vleuten was the clear winner.

The 2018 La Course edition saw riders take on a punishing finale, including the Col de la Colombière before a 15km descent into Le Grand-Bornand. The last 55km of the 112km stage matched the men’s last 55km of Stage 10 of the 2018 Tour de France.

After a nice jaunt around the shores of Lake Annecy, the first climb of the Côte de Bluffy thinned out the peloton. A breakaway formed on the next climb, Côte de Saint-Jean-de-Sixt, with 5 riders getting some distance. They were Leah Kirchmann, Malgorzata Jasinska, Leah Thomas, Anna Christian and Lotta Lepisto also joined. Their largest gap was 2 minutes over the peloton.

Moolman-Pasio attacked as soon as Uttrup Ludwig was caught. She couldn’t get a gap ahead of the Dutch pair though. Anna van der Breggen counter-attacked with 1km of the climb left to race and got a gap of 10 seconds by the top. With Moolman-Pasio distanced, Van Vleuten hunted down van der Breggen on the long 15km descent, keeping van der Breggen in her sights. Moolman-Pasio dropped back on the descent. The gap had stayed stable at around 10-15 seconds the whole way but was down to 4 seconds as they passed under the flamme rouge.

The final 200 metres saw the road kick up once again. It was here that van der Breggen’s legs started to falter. Van Vleuten had paced herself better into the final and began to visibly close the gap. With just 50 metres left of the race, Van Vleuten pulled alongside van der Breggen and pipped her to the 2018 La Course win by 1 second.

“Last year was super nice, but this was a great race. It was unbelievable. With 200 metres to go, I still thought I got second, and then I saw her fighting, and to win like this … I know I am in good shape, but Anna van der Breggen is also a really good cyclist, so it was a really tough ride. Beautiful.”

“The gap was really small, and I know she is also a very good descender, but I always keep on dreaming and believing in myself. I could have given up with 500 metres to go, but I kept going. Always believe, everything is possible. This one is really beautiful, I think. I won on the Izoard last year, I won the Giro Rosa last week, and this one, in this way, is really high on my list.”

“I was really empty at the end, [it was] one little climb too far for me.”

“The people watching us, calling my name, cheering us on, it was crazy – it was one of the best days of my life”

“We were all tired after the Giro Rosa but we just had to ride with our hearts. I like that it was a proper mountain stage and I’m grateful for that, but we want to be pushing for more days and a full Tour would be great.”

The exciting conclusion to the race increased demands for a proper women’s Tour de France stage race. There was a race between 1984 and 2009. This was under the names of Tour Cycliste Féminin and Grande Boucle Féminine Internationale. This race had struggled in the mid-2000s. There was no race in 2004 and much smaller races held between 2005-2009.

Another long-running women’s French stage-race, the Tour de l’Aude Cycliste Féminin, also finished after its 2010 edition. La Route de France filled the gap from its creation in 2006 but it also stopped running after 2016. This all left La Course by the Tour de France as the major French stage race in the women’s calendar.

The 2019 edition saw a return to the criterium style of racing that had been seen on the Champs Elysees. This time though it was in Pau. Raced on multiple laps of the time trial circuit that the men raced. The planned 2020 edition is for 29th August 2020 (post-COVID). It will see riders back on the Champs Elysees for the first time since 2016.

ASO, the organisers of the Tour de France, is often criticised for only doing the bare minimum with regards to women’s cycling. Some of their other races like the Flèche Wallonne Feminine had no live TV coverage for instance. As a result of changes to the Women’s WorldTour, all races had to guarantee 45 minutes of live coverage. ASO’s bizarre response was to threaten to take their races out of the WorldTour.

“We are seriously working on a project for a women’s stage race. We want to organize it in the short term.