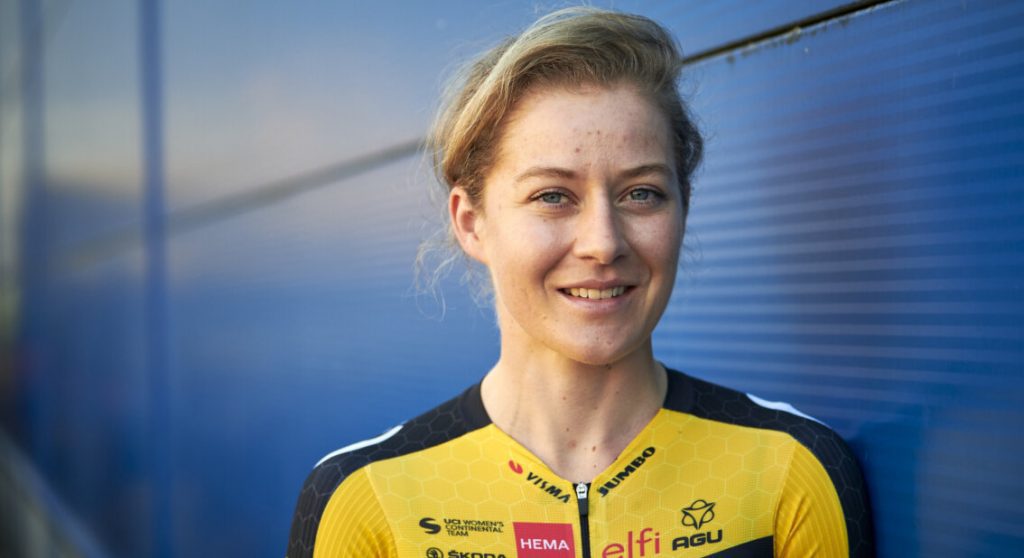 Jumbo Visma has announced the extension of Amber Kraak for 2 more years on the Dutch team via their website. Kraak joined the team in June 2021 and has gradually impressed whilst being new to professional cycling. It’s well-known that Kraak was a former rower and has transitioned nicely to the bike, recently finishing 2nd at the GP de Plouay behind Mavi Garcia. That result was a breakthrough and comfortably her best result in the pro peloton so far in her career.

“After I stopped rowing, I started cycling for fun. It turned out to go surprisingly well for me and I really enjoyed it, so when I got the chance to ride for Jumbo-Visma, I didn’t have to think twice.

From day one, my goal was to make myself useful to the team and to help my teammates achieve a victory,

I am proud of this result [in Plouay]. Last year, during my first race in Brittany, I was way behind the pack, but I had no idea how to overtake on those narrow Breton roads. I have learned a lot. I am now more confident and tactically stronger. I was able to use the experience I gained during the Giro in June and the Tour of Scandinavia earlier this month.”

Kraak is one of a number of athletes in the women’s peloton making the transition from other sports. The likes of Kristen Faulker and Georgie Howe are fellow ex-rowers and riders like Mavi Garcia, who won in Plouay, are former runners and duathletes. As the women’s cycling peloton becomes more professional and a more logical career choice, with better pay and progression, we are more likely to see talent develop from non-traditional sources.

“Amber is a very resilient athlete with a big engine. Add to that her fighting spirit, guts, loyalty and team spirit and you know exactly why we like to keep Amber on the team. We are very happy that we can also count on her for the next two years”

Kraak’s goals for next season are to support her teammates, like Marianne Vos, in the spring classics. She wants to be present in the final 40km and help make a winning difference for the team’s stars. Also, given her rowing background gives her a big internal engine, some growth in the time trial and also strategically in races.