Lizzie Deignan attacked from her nine-rider breakaway on the infamous La Redoute climb, starting her 30km solo journey to victory in Liège. A thrilling chase ensued between former World Champion Deignan and Grace Brown (Mitchelton-Scott), who set off in pursuit on the Côte de la Roche-aux-Faucons. Deignan held off her pursuer to bask in the glory of a solo victory of the Monument. Behind, van Dijk – who was also part of the escape group – played the finish to her strengths by jumping early and masterfully held off the sprinters to take bronze and join Deignan on the podium. 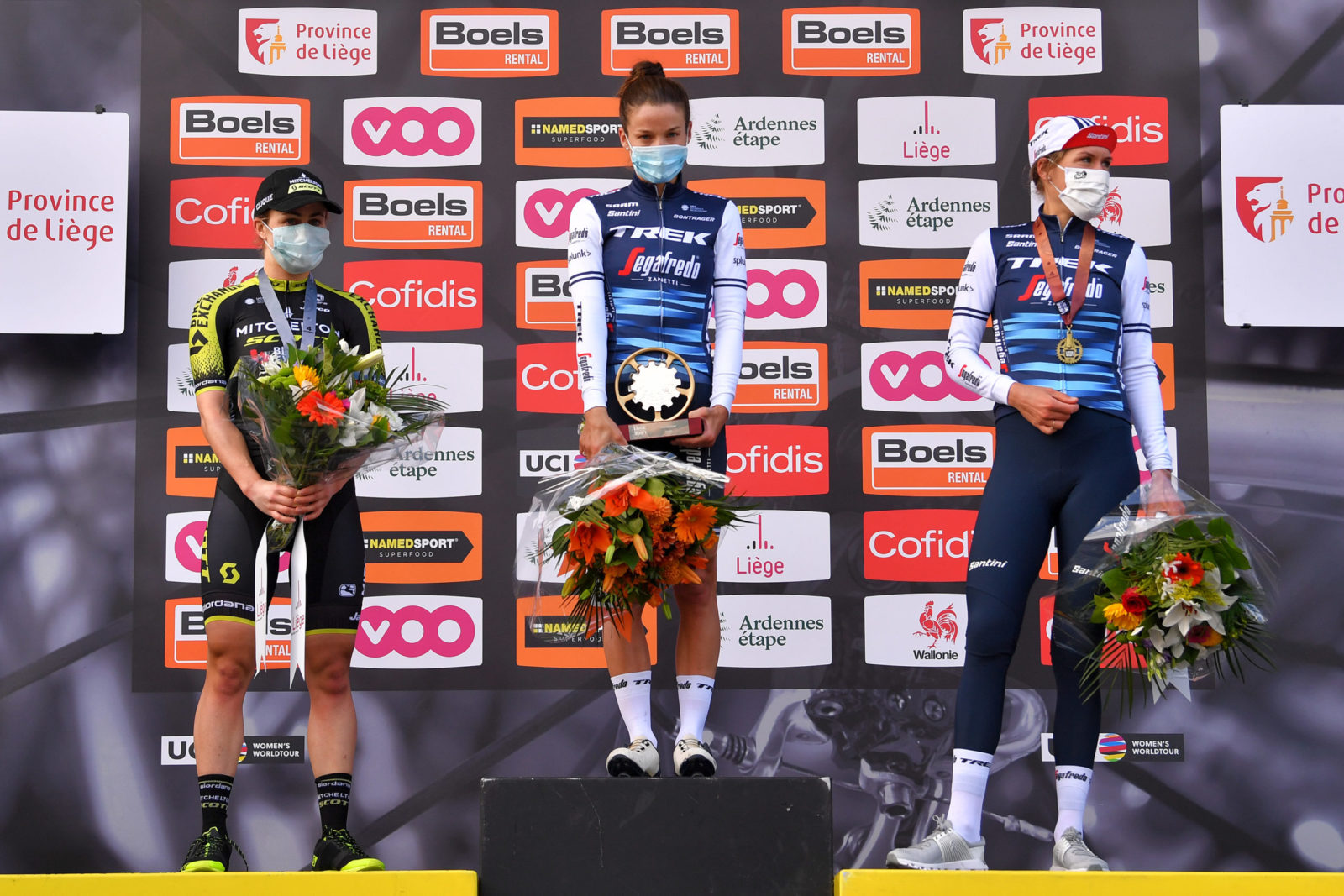 Being in the early break isn’t the most usual scenario for Deignan, but she saw it as the best chance to make it over La Redoute in touch of the favourites, and perhaps help Elisa Longo Borghini. With Van Dijk also in the breakaway, and Trek-Segafredo with the numerical advantage, Deignan was able to keep her powder dry until making her decisive move on the 8.5% slopes of La Redoute, 30km from the finish.

Explaining how teamwork helped to set up the win, Ellen van Dijk said “We planned to create a break on the top of the Côte de Wanne, and we had a really great lead-out into it from Anna [Plichta] and Tayler [Wiles]. Then I attacked on the top and I straight away had a small group. Lizzie jumped across and I was a bit surprised by that because it wasn’t really in the plan. It was really good because she pushed the pace in the breakaway and soon, we had gained a lot of time.” 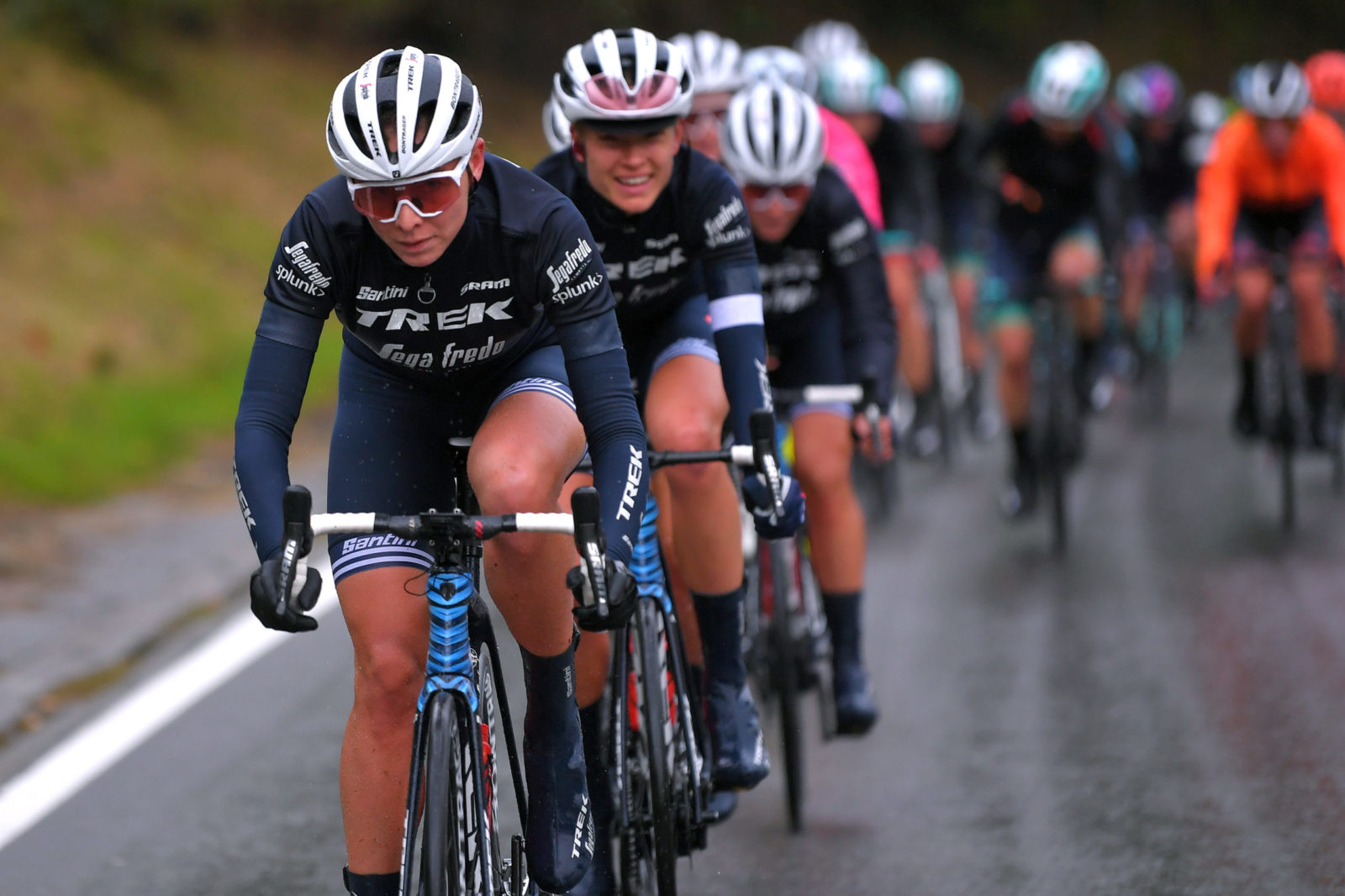 “I just felt the moment, and I think that comes from having confidence of being in this team and having directors who allow us to race on instinct. “The nicest thing about this team is that we’re allowed to race on instinct and not to fear failure,” explained winner Lizzie Deignan.

“It was Ellen who said to me: ‘Lizzie, you have to go on La Redoute’ and I did, and didn’t look back, and I just won. [I knew I had won] In the last 500 meters. It was really close, Grace Brown was coming up really hot behind me and I knew how good of a time trialist she is, and I was getting more and more legless. In the end I started to try and chase the motorbikes in front of me rather than think about her behind me because mentally it cracks you if you think like that.” 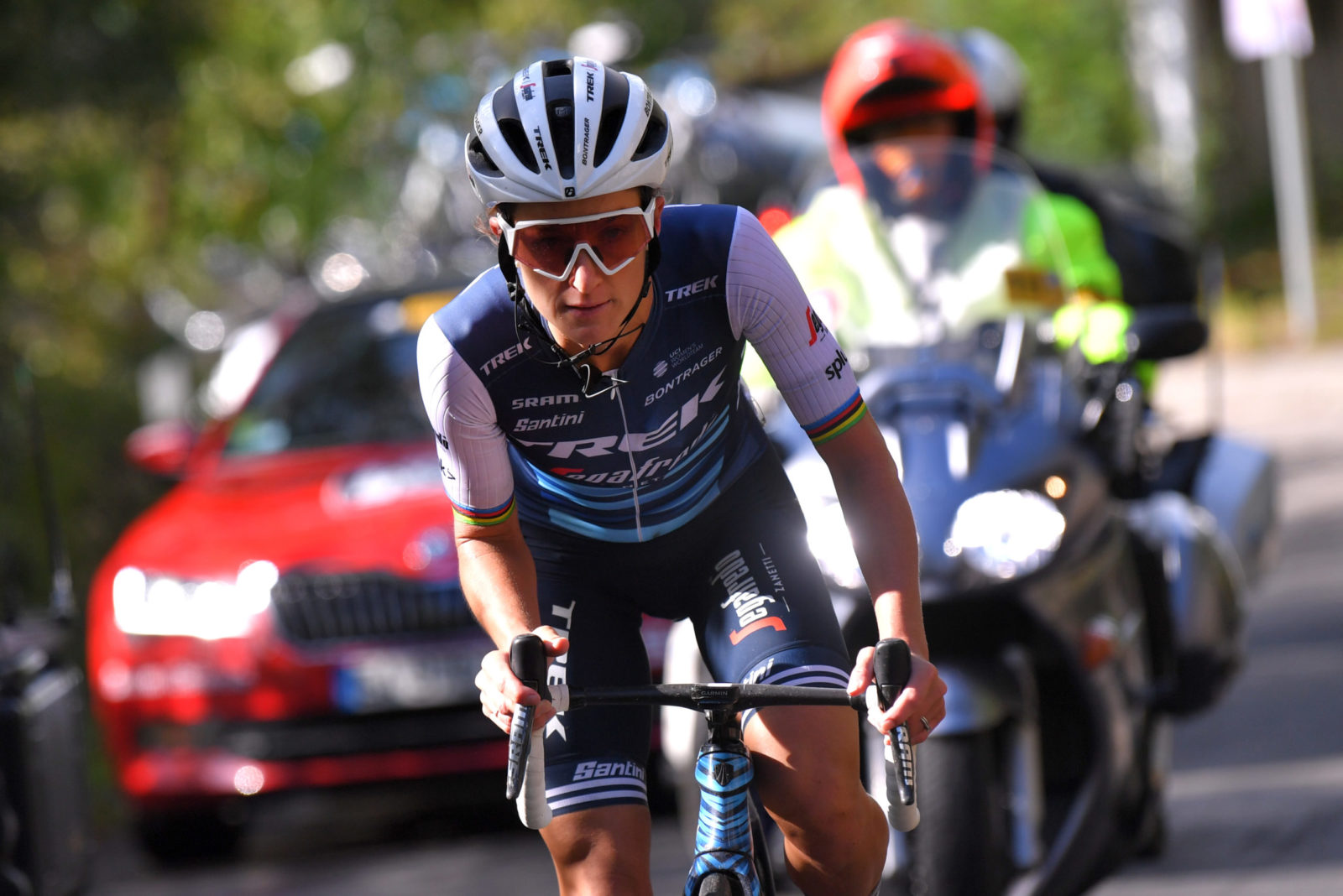 At the finish line, Deignan held off Brown by nine seconds, allowing her to savour the moment and absorb what she had just done. Meanwhile, van Dijk was approaching the finish with a podium position still up for grabs, which she seized with both hands.

“It was super satisfying, I didn’t expect it anymore, I was just trying to figure out what was going on in front because it was still very close with second place. I know I’m not a sprinter, so I thought I needed to find a place to attack in the last two km but I couldn’t find a moment. I was waiting and waiting so I just went in the last 700 meters. I went full gas to the finish, I expected them to all pass me – but they didn’t! I was surprised but that made the day even more perfect,” said third-place van Dijk.

I just had the perfect team today. This is for the team; this is a Trek-Segafredo win. 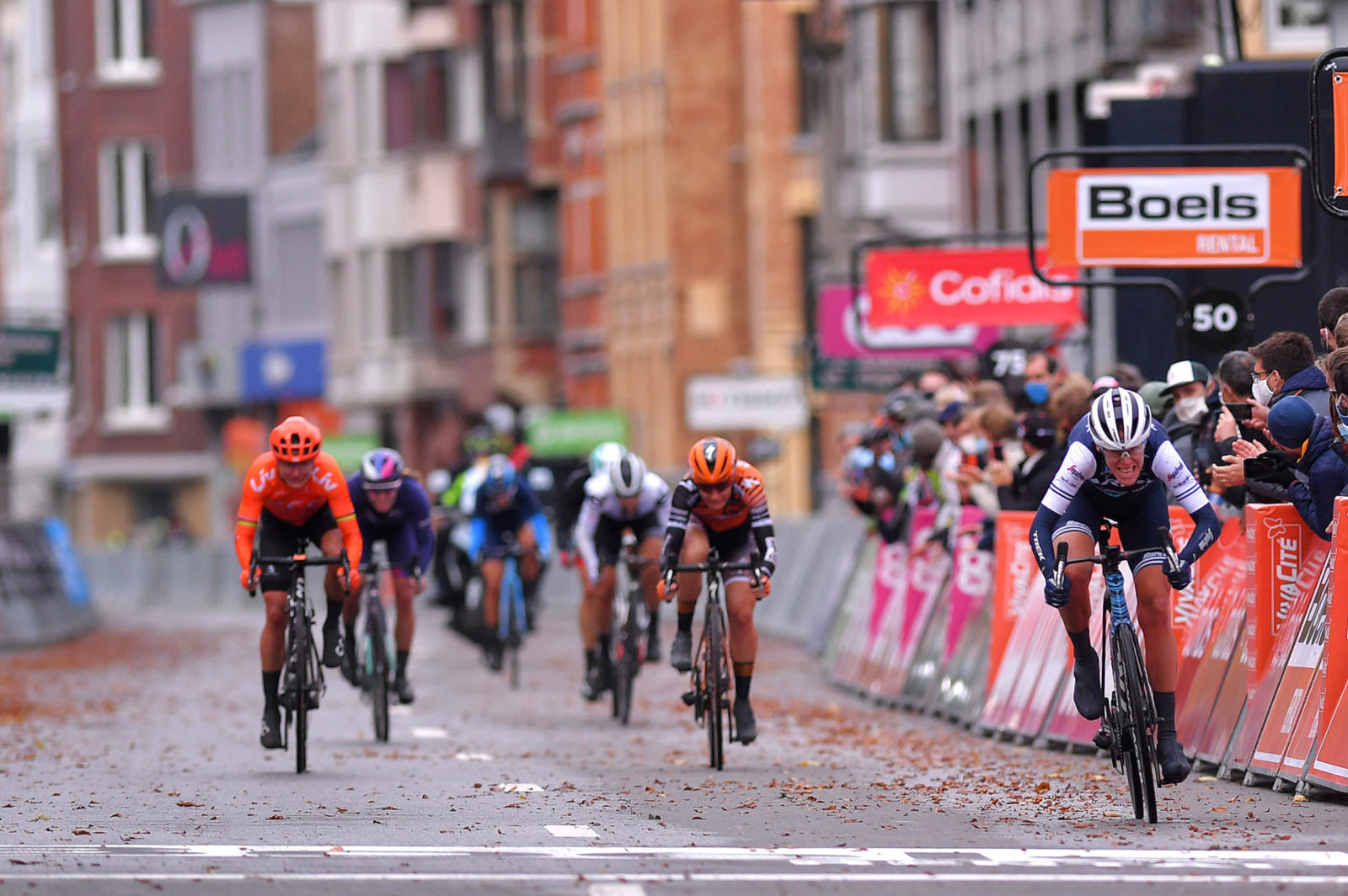 Ellen van Dijk held off the sprinters for third

After taking some time to reflect on the enormity of what she had just accomplished, Deignan said, “I’m just really delighted! It’s been an up and down year for everybody, personally and professionally, and credit to my teammates, staff, and sponsors that I’m just able to focus on being a professional athlete because there are so many other things just now that are so difficult. This is the simple part and I’m supported by the best team in the world, so I feel lucky.”

“We’ve been waiting to win a classic like this and I think we’ve been almost there so many times. I just had the perfect team today. This is for the team; this is a Trek-Segafredo win.”

With the victory, Deignan regains the lead in the UCI WorldTour, taking back the leader’s jersey that she held until La Flèche Wallonne. 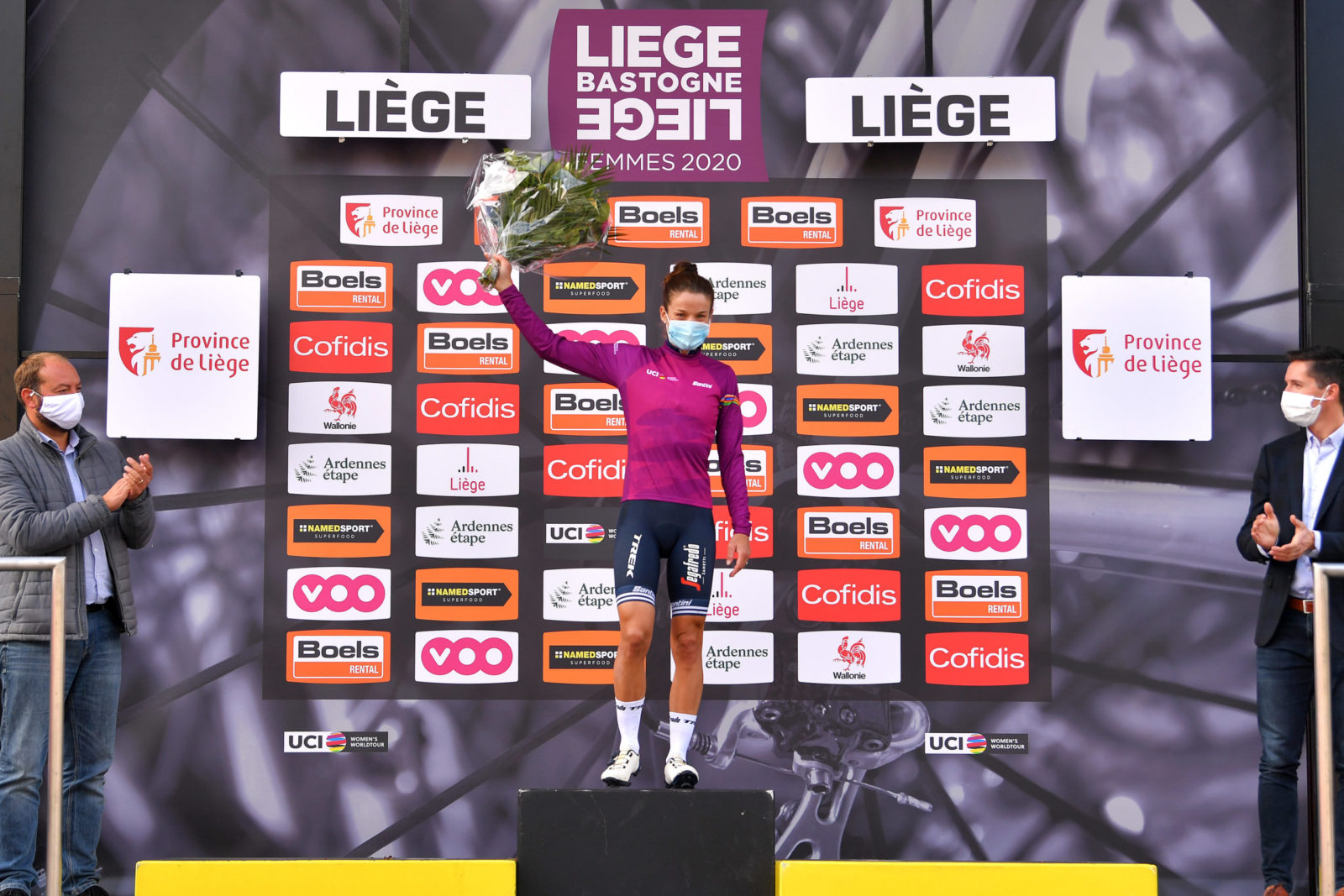