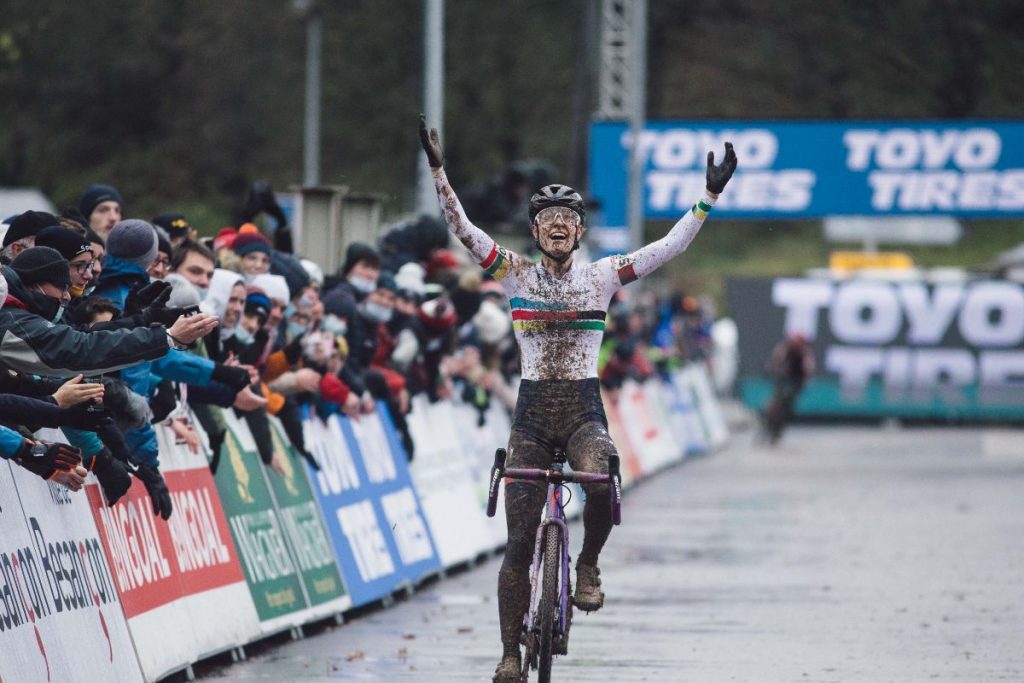 This weekend saw another round of the Cyclocross World Cup with Maghalie Rochette taking her first podium result. The French round was hosted in Besancon for the first time, with the race getting an upgrade to World Cup level. There were a couple of big names missing from the start list. Kata Blanka Vas, winner of the Overijse round, is taking a well deserved short rest period before building up to the World Championships. Ceylin del Carmen Alvarado was also missing due to a back issue. She’d raced the day before in the X20 series in Kortrijk and looked close to her best again, finishing 2nd.

That meant the top 2 riders in the World Cup standings were available to resume battle. Lucinda Brand has looked the best so far this season but Denise Betsema has kept her honest. Before Besancon, just 14 separated the two star riders. Puck Pieterse was distancing herself from the pack in 3rd Overall. She hasn’t missed a single round so far and has been consistently good too. A pair of 2nd places at Overijse and Tabor have seen her take a solid lead in the U23 competition too.

Lucinda Brand got off to a flyer but behind her, a select group was forming. Puck Pieterse, Denise Betsema, Fem Van Empel and Maghalie Rochette were battling each other. Pieterse was once again seen bunny hopping the barriers. However, she didn’t seem to be getting quite the same advantage from it as in Tabor. She lost touch with some of the big favourites early on in the World Cup race but was never too far away.

With a couple of laps to go, Rochette reeled in and passed Van Empel and Pieterse putting her into provisional 3rd. After holding station briefly, it was clear that she was closing on Betsema as well. Betsema often fades late on after starting hard and trying to keep pace with Brand and that happened again here. Rochette came through in front of Betsema and when she was brave enough to look behind later in the lap, she’d got a gap. A gap she held for the final half of the final lap to the finish for her first World Cup podium in 57 attempts.

It had been a tough week for Rochette. She’d returned home for the Canadian CX Nationals, only for them to be cancelled with 3 days to go. A new plan was needed so she rushed back to Europe in time to race in Kortrijk on Saturday. Then there was the long 5-6 hour drive down to Besancon too! It worked out alright with Rochette finishing 8th on the Urban Cross course in Kortrijk.

It was nice to see the Pan-American regional champion’s jersey on the World Cup podium. Particularly, as it’s not one you often see, even on the road. The Pan-American championship is being held 4th & 5th December in Texas. Unfortunately, Maghalie has confirmed she won’t be making another trip over the Atlantic so soon. With no World Cup event in Antwerp this weekend, the next time we see Maghalie Rochette on a World Cup podium will be in her regular team jersey.