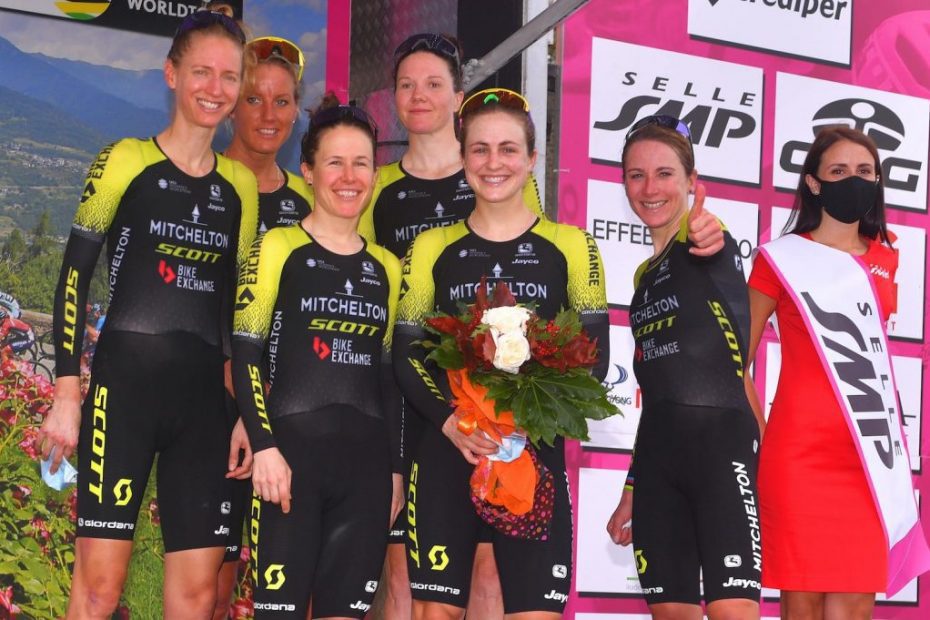 Mitchelton-SCOTT have wrapped up a Giro Rosa of ups and downs, with the team claiming a stage win and two podium finishes, as well as five days in the maglia rosa.

The nine-day stage race began with a strong third place in the team time trial on the opening day, followed by an imperious victory for world champion Annemiek van Vleuten on stage two.

The win propelled the 37-year-old into the race lead, which she held before a crash on stage seven ruled the defending champion out of the remaining two stages, alongside teammate Amanda Spratt.

Here’s what our three finishers had to say after the final day of racing in Italy:

Grace Brown:
“This Giro was a bit of a rollercoaster really, we started off really strong, coming third in the team time trial and then on the second stage Vleuty took the GC lead and that looked really secure, we were defending right up until stage seven when unfortunately both Vleutey and Spratty came down in a crash.

“So, all our team goals had to fully flip after that and we spent the last two stages trying to take opportunities with the riders that we had left, so we had a bit of everything. Some really great times, but also some lows.

“I feel like I had a pretty good tour, I had some bad days, but I sort of built myself back up over the final days and I’m still feeling good despite some really hard racing for nine days. But all-in-all, it’s been a Giro to remember.”

Sarah Roy:
“It was a bit of an unusual situation to handle for everyone on the team, form staff to riders. We started off with the perfect situation with the team time trial and the first couple of stage with Annemiek in the lead.

“Then it came to a pretty devasting end suddenly, so we had two stages left without our leaders., which was an unusual thing to adapt to, but I think Lucy especially did really well to take her chance as our best climber left.

“But we tried, and I’m really glad personally to just finish, sometimes that’s an achievement in itself. I think we see the battle for the GC and stage wins in the limelight, but the whole peloton, all the workers, they all have a personal story that they’ve overcome to get to the end of a stage race like this.”

Lucy Kennedy:
“Obviously, this wasn’t what we had in mind, we were hoping we’d to have another pink jersey, but that didn’t happen. It’s good to know that both Annemiek and Spratty are being well looked after, Annemiek has already had surgery and we’re hoping Spratty will bounce back pretty well.

“But as a team, we didn’t sulk about it, we tried to take some positivity into the last couple of stages and I had a couple of big days in the break that didn’t really eventuate into a result, but our best chance for a stage was to get in the break, we did that and I gave it a good crack.”