Home » Our secret weapon for the Virtual Tour de France

Our secret weapon for the Virtual Tour de France 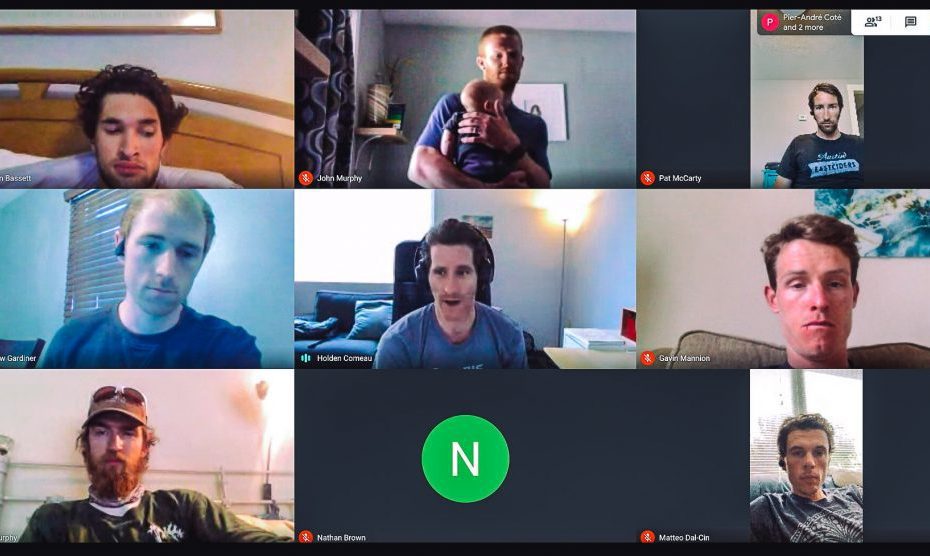 When Rally Cycling received a wildcard invite to the Virtual Tour de France, team management knew it needed a competitive edge. That’s when they approached one of the world’s top-ranked Zwift racers, Holden Comeau (Saris + The Pro’s Closet), to share his unique expertise with the team.

“To beat the best, you need to out-prepare as well as outperform. That in a nutshell is why we brought in Holden,” Patrick McCarty, the men’s team director explained.

With every team from the men’s and women’s WorldTour represented, it was imperative to gain as much insight into online racing as possible ahead of the fiercely competitive race. Comeau, as an athlete, coach, technologist, and gamer, routinely beats up on the best riders in the world. He was a perfect choice.

“When Rally Cycling first approached me they wanted to know if it was possible to prepare a real-life road team for a virtual race in a short amount of time. I knew that it was.”

McCarty says the team jumped at the chance to enlist Comeau’s expertise.

“We deal in performance, so it was a no brainer to consult with Holden – especially in something as important as the Virtual Tour de France. We immediately dove in and covered everything from internet speeds to team tactics.”

In cooperation with Comeau and his eRacing team, Saris + The Pro’s Closet, Rally Cycling has already produced results. On Saturday, July 4th, Pier-André Coté bagged second place on stage 1 of the Virtual Tour.

“It has been fantastic having Holden on the team, he’s brought a bunch of great insight and I felt super confident with him joining our team Discord channel on race day.”

“I was delighted to get such a great result on stage 1, to grab the white jersey and put the team second in the yellow jersey classification, and I have to thank Holden for his advice as well as all the team for its support.”

The value of having an expert to bring riders who are new to the world of Watopia up to speed is hard to overstate, Coté explained.

“Personally, I’ve done a lot of Zwift racing already, but Holden’s expertise has been invaluable for those who are relatively new to the platform. Helping them get up to speed quickly.”

“There’s a video game and tactics perspective. That’s an overlooked skill, maybe it’s comparable to bike handling skills for a road cyclist. But that skill, that gaming skill, is a really significant component of how you achieve success on Zwift.”

Comeau was ranked number 1 in the world for four months over the winter and has been in the top 10 of the official rankings for a year and a half. He cites his ability to ‘play the game’ of Zwift as the reason he consistently outperforms riders with better on-paper numbers. His gaming skill set has carried him through to the finish ahead of professional racers time and again.

“Over the last year as more elite riders have started to join and race it’s become increasingly clear that because they lack that game skill, where they blow me out the water from a pure athletic, power-to-weight standpoint, I more than makeup with it because I’ve got this skill set that those guys lack.”

McCarty explains how Comeau has been leading the Rally Cycling men’s and women’s programs through a series of test races, to sharpen up their gaming skills.

“As a team, we’ve been entering public races with Holden and the Saris +The Pro’s Closet squad to practice and learn tactics.  We then use a private Discord channel to speak to one another. We’ll get on early to talk about some things and when we get in the race, we’ll practice them and try them out.”

“We did a few sessions to prepare for the Virtual Tour and they were really helpful. It’s about creating the experience of trying things, having them fail, and doing better the next time so we’ll be better prepared than the WorldTour teams to deal with them.”

The presence of ‘power-ups’ in Zwift drives home the difference between the sport of road bicycle racing and this new video game-athletic hybrid. Comeau, though, is not convinced the power-ups are as crucial as they’re sometimes made out to be.

“There’s really only one power-up that’s going to change the outcome of a race; the aero helmet. If you’re trying to sprint for the win and the competition has one and you don’t, you’re at a real disadvantage in that scenario. The rest have only negligible benefits.”

As someone who has spent a great deal of time in the virtual world of Zwift, Comeau also understands that the dynamics of the peloton are a lot more ‘controllable’ than they might first seem.

“When you first start riding on Zwift, those economy skills can be really difficult to pick up. It seems like your avatar is just sort of haphazardly floating around, but that really is not true.”

In fact, riders have a great deal of control – they just need the know-how.

“Where your avatar’s positioned relative to others, how you manipulate your positioning through the drafts, how you handle momentum changes through the game,” Holden says. “All of that is well within your control. It’s a skill you develop over time and from what I’ve seen, you can expect the Rally Cycling riders to take full advantage of it throughout the Virtual Tour.”

Rally Cycling is only two stages through the first-ever Virtual Tour and has already found a way to get ahead of the pack.