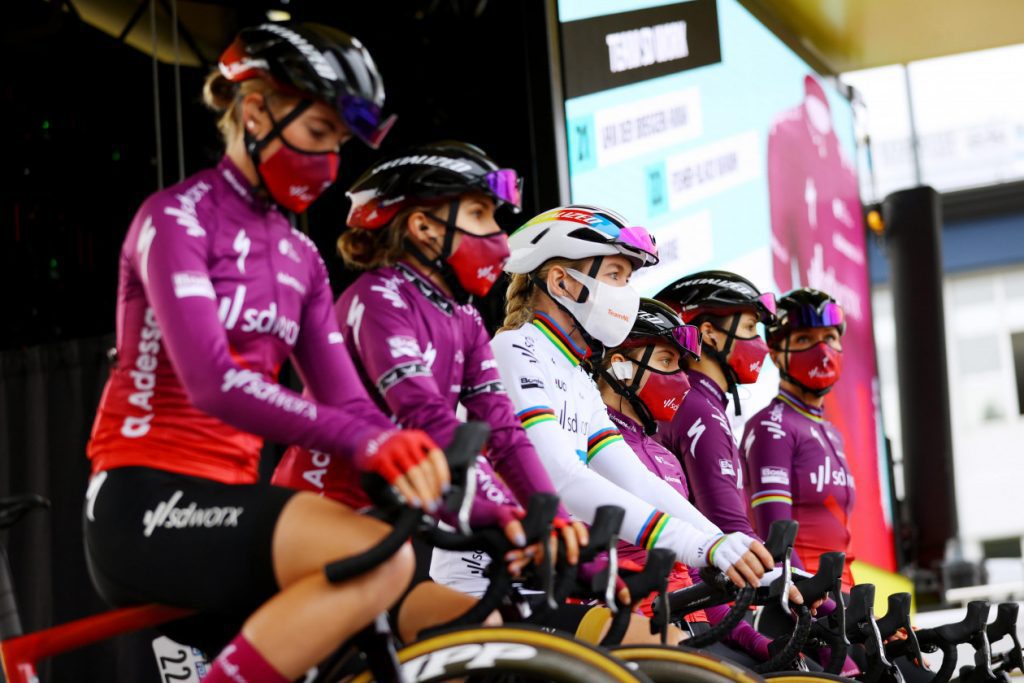 SD Worx is becoming increasingly unique in being a women’s cycling team without a men’s team backing it up. Their success then is a testament to how well they put together a team and be in the hunt for the win at every race they enter. SD Worx racked up 34 wins in 2021, comfortably the highest by any team, and spread them out so that only 4 riders didn’t win.

Anna van der Breggen obviously played a big role in a lot of those victories. She won the Giro Donne, Vuelta a Burgo, Omloop het Nieuwsblad, Fleche Wallonne and a couple more. When she wasn’t racing for the win, she could be seen setting up Demi Vollering for wins at Liege Bastogne Liege and La Course. Vollering then dominated the Women’s Tour, cruising the time trial to take the GC easily. Van den Broek-Blaak took 4 victories in her last full season, including Strade Bianche. Lonneke Uneken and Amy Pieters could be seen sprinting to victories when needed as well.

Pretty much everyone! Demi Vollering will need to adjust to winning without the assistance of Van der Breggen but is confirmed as a top star now. Lotte Kopecky has the potential to score a hatful of wins with this kind of backup. She could dominate the early part of the season. Marlen Reusser could perform a similar role to the one Ellen van Dijk does at Trek. Winning smaller stage races, pressing attacks and being a huge motor for the team.

The climbers on the team will have more to do out of Anna’s shadow. Ashleigh Moolman-Pasio should get more GC leadership opportunities and the likes of Niamh Fisher-Black and Anna Shackley will move up a rung too. The wildcard will be Kata Blanka Vas. We’ve already seen that she can be an all-rounder and I’d be surprised if she doesn’t take a major victory in 2022.

This is a year of generational change for SD Worx. Gone are D’Hoore, Van der Breggen and Canuel, they’ll be joined by Van den Broek-Blaak after the spring classics too. By signing Lotte Kopecky, SD Worx are getting pretty much a replica of Jolien d’Hoore. A square peg for a square hole. She will fill what’s possibly the only weakness on the team, a top sprinter. Marlen Reusser might become the replacement for Van den Broek-Blaak but not quite so directly. She can certainly do what Ellen van Dijk does for Trek and be a useful smaller stage race winner. She was potentially one of the favourites for Paris Roubaix as well.

The retirement of Anna van der Breggen to the DS car is going to have the biggest effect on the team. They identified a successor in Demi Vollering and have been grooming her to take over. She’s not quite as dominant but she’s certainly worthy of filling Van der Breggen’s shoes. Whether that means rival Van Vleuten will get more of a free pass on major climbs as a result will be one of the major factors of success in the 2022 season.

With 5 riders leaving and another due to leave soon, only 2 signings so far makes it feel like there is still some room on the roster. Most major names have been snapped up, so it may be that Roxane Fournier and Nikola Noskova renew for another year as they’ve not been confirmed elsewhere yet.