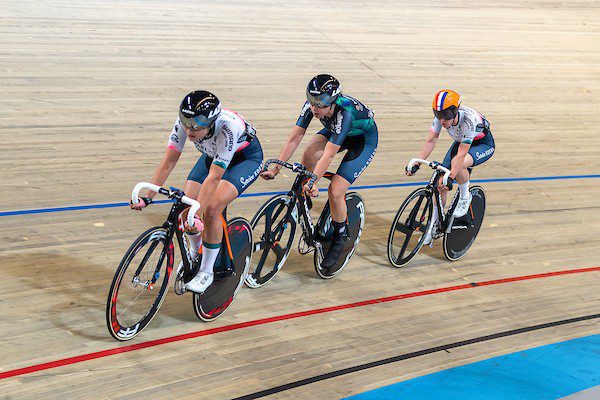 With Lorena Wiebes due to depart the team, Team DSM has announced the signings of 3 more youthful riders in her place. The team has focused on youth in recent years, signing Juliette Labous from a young age and bringing her through to GC contention and the likes of Francesca Barale were signed last year after impressing in the youth categories.

Daniek Hengeveld joins from GT Krush Tunap, with Anna van der Meiden and Nienke Vinke joining from the junior ranks. Hengeveld first burst onto the scene with an impressive solo break at the Healthy Ageing Tour in 2021. There she held off the peloton for a long time before the sprinter teams finally caught her near the finish line. The signings mean that the Team DSM roster for 2023 is up to 9 confirmed riders.

Nienke Vinke is the reigning junior national champion in the road race and time trial, so naturally was sought after by the Dutch team. Vinke has previously been part of the youth development set-up at AG-NXTG and has chosen to jump straight to the Women’s WorldTour with Team DSM rather than take the steps up the ladder that AG-NXTG intends to take when able.

“I learned a lot in the last two years at NXTG. I chose Team DSM because they have a lot of experience and a good track record in developing riders. In the juniors, I see myself as an all-round rider who can do well in stage races. In the short term I hope to be able to make the transition to the elite peloton in a good way and I would like to learn to ride as a team.”

Anna van der Meiden has a similar history, she was also a double Dutch junior champion, but in 2021. That year also saw her finished 4th, just outside of the medals, in the junior Worlds TT as well. She ultimately wasn’t able to contest the Dutch nationals this year, so may yet have retained her double titles ahead of Vinke.

“I think Team DSM’s anti-doping stance is very strong and that was something that was very important to me when looking for a squad. At the moment I don’t know exactly what type of rider I am, but I think I can be a good climber and I also like time trials. In the short term, I would like to serve the team as best as possible, while in the future I would like to win a stage in the Giro.”

“Anna had an exceptionally good junior year with strong results. She has shown to have a big bike, she is explosive, she has a good time trial and she can climb well; she is a strong all-round talent, who is very driven. Nienke achieved an impressive double at the Dutch National Championships this year and she has also won many races in the Dutch junior circuit. She has a huge engine, but also proves to be a versatile rider who is explosive and can climb quite well, in addition to her strong time trial performance.”

Daniek Hengeveld has relied on making people take note of her racing to make this move. Strong attacks and a reputation that she is hard to catch have meant that teams and riders definitely know who she is. Her track background is helpful in that regard – she has previously been a national and European champion in that discipline. Team DSM noted her as a junior and now they have her on the roster, and will use her in the classics and in the lead-out train for the sprint.

“Team DSM has clear goals with their riders when it comes to development as individuals and as a team. That really appeals to me.”

“I can’t wait to get started, I think I’ve shown so far that I can ride a good time trial and also ride a fast pace in the peloton for a long time, but I also believe that I haven’t discovered my full potential yet. The team wants to help me realise that and I look forward to discovering what type of rider I really am together with Team DSM.”