The crowning point of the Flemish classics is, of course, the Tour of Flanders. It’s also the race that gives an entire region its identity; expect to see copious amounts of yellow Flemish flags being waved during the race. For many it’ll be the end of their Spring Classics season as the races move onto Northern France and the Ardennes so they’ll be keen to make the most of their last opportunity.

The combination of the long distance, cobbled climbs, non-cobbled climbs and cobbled sections will wear out the riders’ legs, expect to see the race winning move take place on either the Oude Kwaremont or the Paterberg that comes afterwards and a tiny group finish in Oudenaarde together.

There’s a group of obvious favourites, Triple world champion Peter Sagan is fresh off a win in Gent – Wevelgem. He chose not to race Dwars Door Vlaanderen so may end up being fresher than other contenders that did. The win helped dispel rumours that he wasn’t on form this season and makes him an obvious favourite to repeat his 2016 Flanders win. Belgian favourite Greg van Avermaet is back on form after some poor showings in the first classics of the season. He’s missing that big win that we’ve come to expect but has always been up there, a 3rd place in E3 Harelbeke is his best so far. He finished 2nd last year, he could finish one step higher in 2018. His 6 top-10s in De Ronde is equalled only by Tom Boonen. Tiesj Benoot‘s form is still continuing after his Strade Bianche win. He’s finished 5th in E3 Harelbeke and 7th in Dwars Door Vlaanderen within the last week. He was able to attack on the final climb in Dwars Door before unfortunately being counter-attacked by the winning move. On this form, he’s more than capable of finishing on the podium. 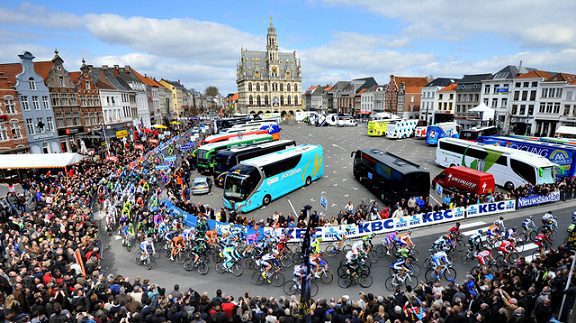 Michael Kwiatkowski leads Team Sky, the former World Champion only has a best result of 27th in Flanders but his profligacy this season in winning races stage races like Tirreno Adriatico and the Volta Algarve means he’s worthy of a mention through form alone. Sep Vanmarcke is always in the conversation, he has good form this season with a 3rd in Omloop, 7th in E3 Harelbeke and 3rd in Dwars Door this week. He should be a decent shout for another podium as long as he can avoid the gaps in Belgian roads this year.

On the next rung of favourites are the Quickstep duo of Philippe Gilbert and Niki Terpstra. Gilbert finished 2nd in E3 Harelbeke and Terpstra won it. These results are a reason this year Quickstep have been dominant in one-day races, but it’s been tough to work out which rider will make the winning attack. Last year in Flanders it was Philippe Gilbert who couldn’t be caught after an attack that seemed to be from too far out. Expect a repeat attack from a Quickstepper this year.
Trek in theory will be led by John Degenkolb, but Jasper Stuyven has the best chance for a good result in Flanders. He’s been wracking up the top-10s this season, picking them up in Dwars Door, Gent Wevelgem, E3 Harelbeke, Milan Sanremo and Omloop. Belgian Champion Oliver Naesen has started to show his form, hopefully peaking for the Tour of Flanders. Good results of 4th in E3 Harelbeke and 6th in Gent Wevelgem within the last week show that form. He’ll be looking for a breakout result in this race in the Belgian colours.

The wildcards next, Wout Van Aert has become an obvious wildcard. After the stunning 3rd place in Strade Bianche, he’s had a mixed bag of results but the 10th place in Gent Wevelgem shows he has the potential to do well in Flanders. The biggest question about him has been whether he has the endurance. The length of Gent Wevelgem and his result there should start to answer that. Matteo Trentin will be the option for Mitchelton Scott, he’s another with strong results in the last week with 7th in Gent Wevelgem and 11th in E3 Harelbeke. He’ll be hoping to peak for the Tour of Flanders. Bahrain Merida are pinning their hopes on the combination of Vincenzo Nibali and Sonny Colbrelli. Nibali is coming off a win in Milan Sanremo and is a big wildcard here, he will race hard but there are no guarantees of a strong result. Colbrelli’s form may have peaked too early, he had strong results early on in Kuurne-Brussels-Kuurne and Omloop but went missing in E3 Harelbeke and Gent Wevelgem.

Finally, Alexander Kristoff has 5 top-5s in the Tour of Flanders, his form has been rather patchy. It either means he’ll underperform or he’s done an amazing job of flying under the radar and hoodwinking his rivals. Arnaud Demare finished 3rd in Gent Wevelgem and Milan Sanremo, he’s never finished higher than 22nd in the Tour of Flanders however. If the race is kind, he can power himself up and over the Paterberg with the lead group and win in a sprint.

If things don’t work out for Michal Kwiatkowski, Team Sky will be leaning on Gianni Moscon. He’s finished 8th in E3 Harelbeke this year and has a best finish of 15th in the Tour of Flanders. He’s got a good chance of a top-10 this year. Michael Valgren was the surprise winner of Omloop Het Nieuwsblad for Astana. So far the closest he’s come to repeating that is a 14th in E3 Harelbeke. He’s got the potential to finish in the top 10 this year, but everything has to go right for him. Should the aforementioned Quickstep riders fail, Zdenek Stybar is the next man up. Top-10s this year in Strade Bianche, E3 Harelbeke, Gent Wevelgem and Dwars Door shows he has the form, he just needs to be the Quickstep attacker that makes the right break.

4th in Gent Wevelgem and 13th in Milan Sanremo shows that Christophe Laporte has the endurance to finish strongly in long races. The Tour of Flanders is hillier than both however so may prevent a similar performance. 16th in Dwars Door this week means he’s in the conversation though. Mads Pedersen and Edvald Boasson Hagen feature here after making the winning break in Dwars Door Vlaanderen on Wednesday. Both have had iffy results across the board this season with a few highlights between them. Boasson Hagen has always been a rider likely to finish around 20th in De Ronde and that’s likely to still be the case.

Finally, the mystery that is John Degenkolb. His manager admitted in the last week that he’s not been the same rider since the horrific incident with a car back in 2016. His form this season is questionable, but he got his best Tour of Flanders result last year by finishing 7th so there’s hope yet. Depending on how Stuyven feels, he may be pressed into being an elite helper too.