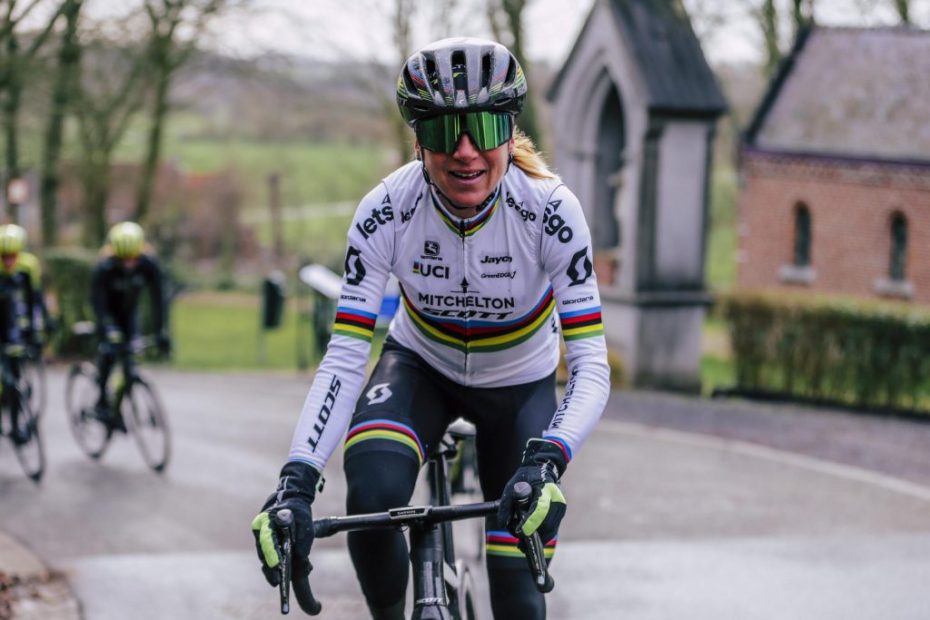 The world champion was able to follow a strong and important move by Elisa Longo-Borghini (Trek-Segafredo) after 65kilometres of racing on the Muro de Tirapu and the duo quickly put time into the suffering chasers.

It was on the final climb of the day when the Mitchelton-SCOTT rider picked her moment to go, putting the pressure on which caused the Italian to lose contact.

Rapid start
After blowing out the cobwebs in yesterday’s race, the peloton got off to a fast start covering almost 40kilometres in the first hour of racing over the rolling terrain.

It was clear to see the variety of levels within the peloton with a large number of riders already dropped after the first 30kilometres.

Short and steep
Mid-way through the race, a selection of short and steep classified climbs saw the peloton break up even further and the successful move came on the climb Muro de Tirapu.

It was Longo-Borghini who really lit up the race attacking away on the steep slopes leaving a reduced bunch behind. Van Vleuten saw the danger and quickly accelerated across to join Longo-Borghini and the duo quickly established a lead.

Changes at the front
On the penultimate climb the pair really began to put time into the chasing group reaching an advantage of one-minute 45seconds.

In a sudden turn of events, a puncture almost took Borghini out of contention however, showing sportsmanship, Van Vleuten waited to allow the Italian to re-join.

The final climb provided the perfect launch pad for the rainbow jersey, as she accelerated away to victory.

“It was hard but I know when I feel my legs and they hurt I have to think differently and know this is the moment to attack.

“I thought today’s course would suit different girls compared to yesterday, it was a bit punchier and I was thinking for me it was better to have the long climbs. Alejandro Gonzales, my director, was talking about the Cote de La Redoute climb from last year, that gave me goosebumps and that was really good coaching from him.

“Remebering last year on La Redoute, I just went from the bottom, didn’t look back, committed and at the top there was nobody there, then I picked up Elisa (Longo-Borghini) about half-way up.

“At the moment when Elisa had a mechanical, we had around one and a half minutes, I was thinking should I stop or is it better to continue with a solid pace and hopefully she could come back.

“When I saw her coming, I waited for her and I was really happy we could ride together. That is not the way to drop someone or the way that you want to win. It felt like fair play and I am happy she came back.

“Today was really good also to see all my teammates were there, we had a full lead-out into climbs, all together, protecting each other and that is also really good for the motivation if you ride together.

“It was really happy to see Lucy Kennedy was better and better with her positioning and also Moniek Tenniglo was really strong today. That makes me really proud.”