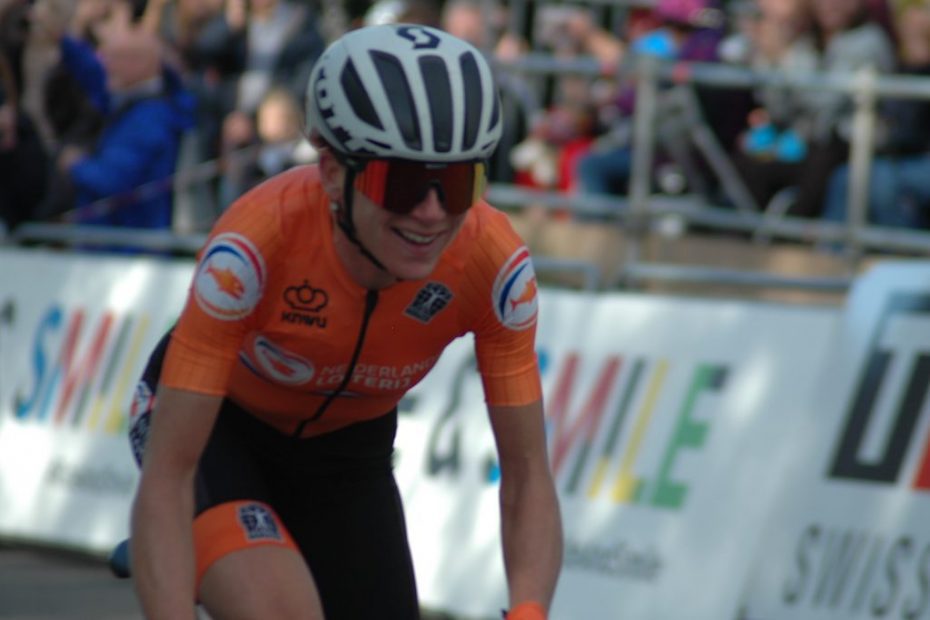 World champion Annemiek van Vleuten started the 2020 season off with a bang today, claiming an emphatic solo victory in Omloop Het Nieuwsblad, her first race in the rainbow jersey.

In her signature style, Van Vleuten injected a fierce pace at the base of the Muur-Kapelmuur and rode away from her rivals, reaching the top of the climb with a large advantage.

With the rainbow stripes on her back, the Dutch star fought all the way to the line to take her first ever victory in the one-day Belgian Classic.

Nervous start
As the first race of the season for many, the race began with a nervous feel throughout the peloton. The 126km day began with a trio of riders jumping away and dangling 50seconds ahead of the bunch for the fairly flat opening 30kilometres.

With wind and cold rain adding to the day’s difficulty, the escapees didn’t last long out front and were swallowed up ahead of the first main cobble section.

Fight back
Van Vleuten suffered a mechanical problem with 70kilometres remaining which caused her to chase back hard to get herself back into contention. Overcoming the small set-back, the world champion re-joined the action just ahead of a decisive split and with the adrenaline pumping through her blood, the cold temperatures were out of mind.

After the iconic Molenberg and the tough Paddestraat cobbles, the front of the race whittled down to around 14 riders. Mitchelton-SCOTT were present with both Van Vleuten and Gracie Elvin in the group, before the race settled down again as the road surface returned to smooth concrete.

With this, a small group were successfully able to bridge across and increase the front group out to 21riders which played to Mitchelton-SCOTT’s advantage, with Van Vleuten’s teammate Sarah Roy making the junction to give the team extra strength in numbers.

Muur moment
On the much-anticipated climb of the day, the Muur-Kapelmuur, both Elvin and Roy worked to set a hard tempo into the base of the climb allowing the world champion to unleash.

Like a flash back to the world championships, Van Vleuten put the hammer down with a hard pace from the bottom of the brutally steep cobbled climb, which demolished the peloton.

Her injection of speed saw her rivals lose distance with each pedal stroke and the time gap continuously increase. Van Vleuten was able to hold on to cross the line in Ninove for a very special victory.

Annemiek van Vleuten
“I can’t believe this has happened because I am always such a slow starter and I know I usually grow into the season. So to start like this, I really didn’t expect to be solo over the Muur, I thought more girls would follow me.

“If you win solo you can really enjoy the last kilometres and I really enjoyed those moments today, it is my first win here and in the rainbow jersey is an incredible feeling.

“It was one of those races were the team did everything perfectly, we were always in position, we were there when we needed to be in front and I didn’t have to spend any energy and they first put me in an awesome position for the climb.

“I didn’t have any expectations, but my goal was to go hard from the bottom of the climb then check to see who was following me. Only then could I make a decision on what to do, just see what the situation was and then deal with it.

“At one point when I was solo coming into the final my director Martin (Vestby) said the time gap was 30seconds but then I started to doubt if he said 30 or 13seconds, so that made me a little bit insecure in the final kilometres.

“I felt like maybe I was losing time and they were chasing really hard behind me, but then I just looked a little bit to my watts on my Garmin and could see I had a lot of power, so I knew they need to chase really hard to catch me.”