What happened to… Robbie McEwen 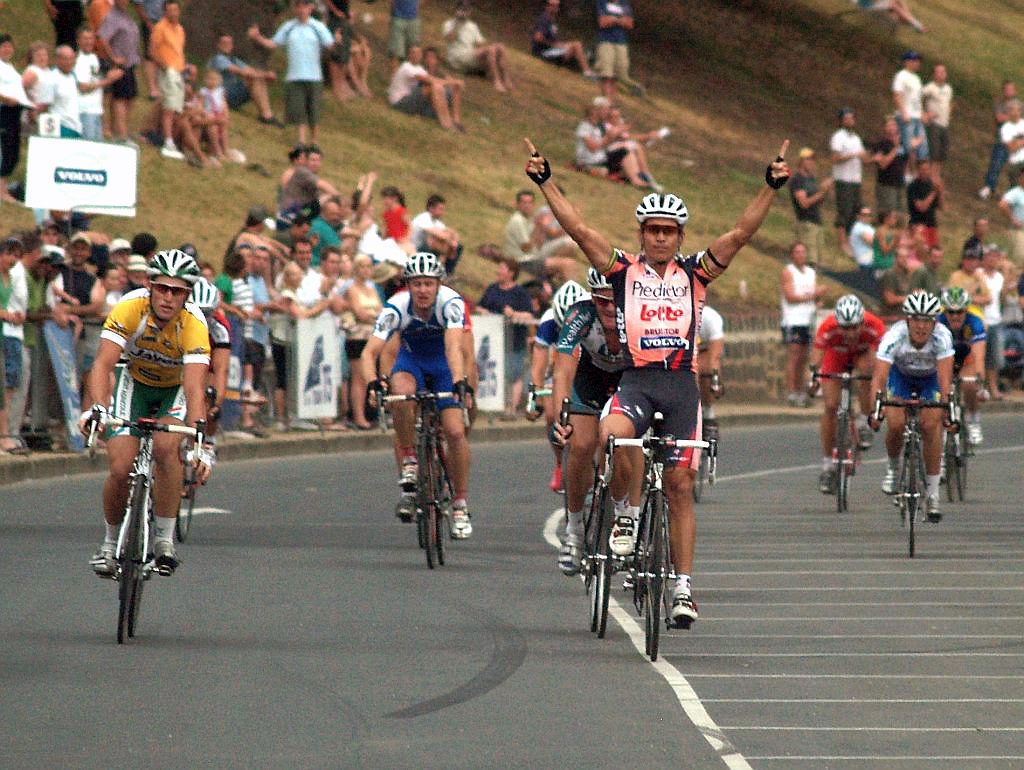 Robbie McEwen was something of a favourite of mine growing up. During that spell where McEwen was at his best, I was a teenager just starting to ride further than ‘up the village’. I’d picture myself sprinting to victory as the Aussie sprinter, who I was already taller than. I even put him in my top 5 riders which I wrote way back in something like 2014.

McEwen was visibly Australian, from the big green and gold national champion jersey he wore for a couple of years to the permanent sleeve cuffs from 2002 onwards. Yet after signing for Rabobank in 1996, he raced for Dutch/Flemish teams for the next 12 years, married a Belgian, lived in Belgian village near the Kapelmuur and became a fluent Flemish speaker.

In modern times, only Mark Cavendish has won heaps more Tour de France stages. McEwen won 12 Tour de France stages, the same as his contemporaries Mario Cipollini and Erik Zabel and 2 more than Thor Hushovd. Of the next generation of sprinters, only Marcel Kittel has more with 14, Sagan also has 12 and Greipel has 11.

Often misspelt as Robbie McEwan, Robbie McEwen began riding BMXs and was a national champion before switching to road cycling aged 18. In modern terms, he turned pro quite late at 24 when Rabobank signed him in 1996. In comparison, Egan Bernal has already won the Tour de France before that age! He took his first pro victory by outsprinting the king of the early 1990s Green Jersey – Djamolidine Abdujaparov. McEwen himself completed his first Tour de France in 1997 but only managed a best stage finish of 4th. His 6 top-10 finishes were a decent start though.

At this point in his career, McEwen was a fairly respectable Spring Classics rider. Finishes of 12th at Dwars Door Vlaanderen, 23rd at Gent Wevelgem and 26th at E3 Harelbeke in 1997 weren’t bad for a rider destined to be a sprinter. The following year, he came close to a stage win at the Tour de France. He finished 2nd as the race finished its jaunt to Ireland in Cork.

1999 saw the duck broken. McEwen won on the final stage of the Tour de France on the Champs Elysees to get his first Grand Tour stage win. He outsprinted Erik Zabel, the successor to Djamolidine Abdujaparov as the dominant Green jersey winner. A first stint at the Vuelta was ridden too with 3 near misses – 2nd, 3rd and 4th places. He swapped Rabobank for Domo-Farm Frites in 2000 but results didn’t change much. He wasn’t taken to the 2001 Tour de France and a move to the Lotto team followed. McEwen was still a solid sprinter but not quite the great he was to become yet.

2002 would prove to be a career year. Stage wins at Paris Nice and the Giro d’Italia, plus Scheldeprijs showed his best form going into the Tour de France. McEwen won 2 stages, including the Champs Elysees again on his way to winning his first Green Jersey. A series of consistent high finishes during a sprint-heavy first week of the Tour set up the win. The end of the season saw him finish 2nd in the World Championships that year in Zolder too.

Another 3 stage wins at the 2006 Tour de France and he won a final 3rd Green Jersey. He finished a huge 89 points ahead of erstwhile contender Erik Zabel. 2007 was arguably the last year of peak-Robbie McEwen and contained one of his most epic victories. McEwen crashed with around 20km left to race but his entire team worked to get him back to the peloton. Now at the back of the pack, he managed to fight himself through to sprint clear for the victory. The injuries from that crash flared up though and he finished outside the time limit once the race hit the mountains.

The 2008 Giro and Tour were his last ones with Lotto, now aged 36. He still finished 2nd on one Tour stage and 3rd was his best at the Giro but his powers were definitely waning. A move to Katusha happened in 2009 with no major results. A final hurrah at the Tour de France in 2010 saw Robbie McEwen finish still highly thought of. No stage wins but 5 4th place finishes were a mark of consistency.

McEwen spent 2011 at Radioshack but he was unable to complete his last Giro d’Italia. 2012 saw the creation of the new Orica Greenedge team to represent Australia and McEwen found a new home. Now 40, there was 5th place at the Tour Down Under but after struggling to hold onto the grupetto in California, it was time to retire.

Immediately after retiring, and still in contract with Orica Greenedge, he took on a role as a technical adviser and as a sprint coach. Able to impart his many years of top-level experience to this brand new team.

He published an obligatory autobiography, just before retiring. One Way Road is a decent read. Other merchandising includes lending his name to a Gran Fondo event and a range of bib shorts and chamois cream. The last two things certainly go together when you think about it.

A move into the commentator’s box wasn’t a surprise. Whilst riding he’d always engaged with journalists and was never shy about telling his side of a story. He joined fellow Aussie Matt Keenan in commentating for the Tour de France’s English world feed between 2017-2019. They replaced the legendary team of Phil Liggett and the late Paul Sherwen. He’s also regularly commentating early on in the season at SBS as they covered the Australia races.

As of 2022, Robbie McEwen is a commentator for Eurosport & GCN. Primarily on the main English feed that goes around the world. He covered the 2022 Giro d’Italia and made an immediate impact on fans with his insights of the pro peloton. Those years on the Lotto team also means McEwen speaks fluent Dutch, which comes in handy for post-race interview translation.