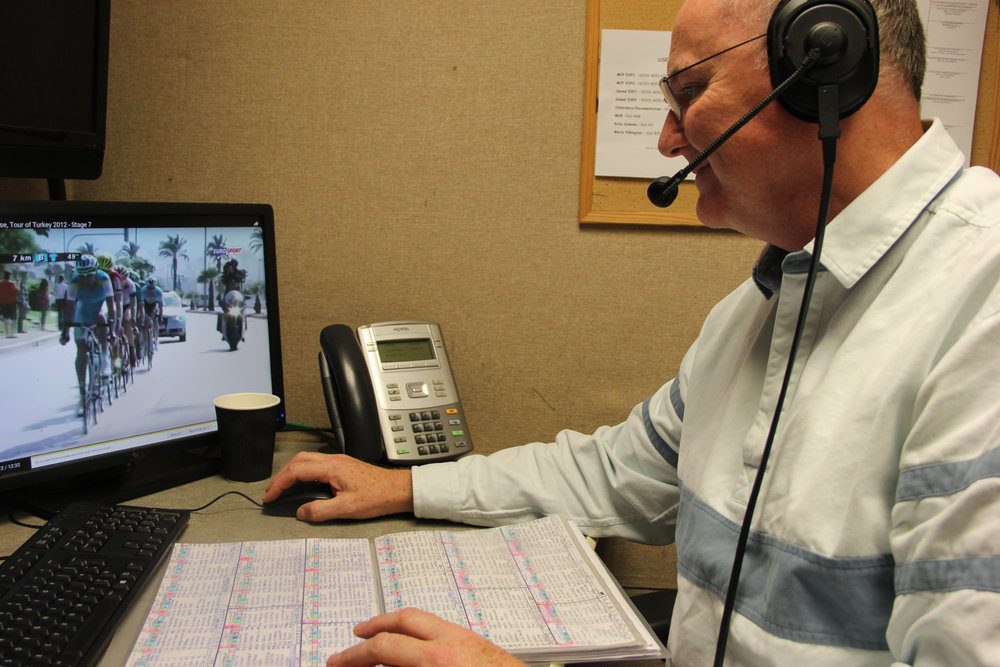 The voices of the cycling commentators on Eurosport are beamed into our homes. Every single bike race we watch has some commentator giving their spin on the action. Eurosport has a select core of lead commentators who find themselves describing the action we see. They’re always paired with an ex-pro to provide the colour commentary, with insights about the racing, learned through their time in the pro ranks.

Each commentator has their own style and you only have to listen for a few seconds to work out who they are. Everyone knows that Rob Hatch is the guy who pronounces each foreign word ultra-correctly and that Carlton Kirby will be the one telling the dad jokes. With a couple of exceptions, almost everyone on this list will be Tour de France commentators 2022.

Probably now the highest-profile commentator on Eurosport, the only criticism Rob seems to get is due to his perfect pronunciation of all words in all languages. It makes sense when you find out that he was a languages graduate – Rob was in fact in his 4th year of Uni at Bangor when I started my 1st year there (also in the languages department). Hatch is often on the biggest races and usually covers the race finishes too.

Kirby is the most marmite commentator there is. He inspires such devotion that he has his own fan club, yet also is on the receiving end of a petition to get him sacked. For me, Carlton is the perfect commentator for the ‘early shift’ on long, flat grand tour stages. With nothing doing, Carlton Kirby still finds plenty to talk about and discuss, with the dad jokes aplenty too.

You used to hear Declan Quigley covering the Giro d’Italia but now seems to find himself part of the B-tier. He’ll often be heard covering non-WorldTour classics and stage races with his distinctive Irish accent. He’s been heard less and less on Eurosport and GCN recently as he’s been on the world feed coverage for the Flanders Classics in 2021.

A recent addition to the Eurosport and GCN team in 2021 and the only female lead commentator (even if the name catches plenty out on Twitter). She’s often heard covering non-WorldTour classics most often where she can use her native Dutch to pronounce riders and place names perfectly.

The lead commentator for cyclocross and women’s cycling on Eurosport. It’s rare to watch either without hearing Marty’s voice in recent years. He’ll usually be heard paired up with Dani Rowe for women’s cycling and Jeremy Powers for the cyclocross. After a brief rest in January 2022, McCrossan has been back behind the mic once again.

A former rider who has stepped up to lead commentary after initially being a colour commentator. With the joining up of GCN and Eurosport, he’s now regularly seen across all coverage. From talking about spring classics to grand tours, he’ll also be seen in the studio after races. Talking about the day’s events and doing analysis with the touchscreen TV.

The first former rider to jump into lead commentary from GCN when it was just a humble Youtube channel! He was initially mixing his GCN duties with the odd spell of commentary but soon changed the balance towards commentary. As his profile grew, he began compering cycling events like the 6 Day track racing and is regularly used by Zwift for their online commentary race events too.

Viewers have heard more and more from Jez Cox over the last year. The first race I remember hearing him was during the Vuelta CV Feminas at the start of 2021 but he’s now a regular across the board on cyclocross and stage races like the Saudi Tour at the start of the 2022 season.

The distinctive Irish voice on Eurosport. Sean Kelly is a great of the sport of cycling – a 9-time monument winner, 4-time Tour de France green jersey winner and winner of the Vuelta a Espana in 1988. Mr Paris-Nice won that race 7 years in a row during the 1980s. Sean Kelly is almost synonymous with the coverage of major races on Eurosport and GCN.

Most famous for winning the 2004 edition of Paris Roubaix, Magnus Backstedt had a long pro career. He won a stage in the Tour de France in 1998 for GAN and after retirement, ran development teams in his adopted country – the UK. His daughters, Zoe and Elynor are currently emerging talents in women’s cycling. Zoe, in particular, became a double junior world champion in the last year. Maggy will often be heard on lower-level Belgian classics although not exclusively.

Smith was twice a winner of the National Road Championships, in 1991 and 1994, as a rider before becoming a directeur sportif. He helped develop the Endura, NetApp (became Bora-Hansgrohe) and MTN-Qhubeka teams in their early days before becoming a staple on Eurosport and GCN.

An Olympic, World and European champion on the track, Dani Rowe can now be heard covering women’s cycling on Eurosport. She retired from racing after 2018, a season where she finished 3rd in the Women’s Tour. She brings insider knowledge of the women’s peloton to the race commentary.

Another former National Road champion, in 2016, Blythe’s relaxed style has seen him move from the studio to behind the mic. He initially started combining riding with Eurosport work in his final season in 2019. He’s now a regular behind the mic and on the couch during The Breakaway – often with some flamboyant shirts. In his racing days, Blythe was a consistent lower-level classics racer and sometime sprinter.

Powers can be heard exclusively during cyclocross races, usually paired up with Marty McCrossan. The American former pro rider won 4 national titles in cyclocross and was a top-10 ranked rider. He also was known to race on the road during US races. He was the commentator on the track using the 2022 Cyclocross Worlds held in Fayetteville, Arkansas this year.

Bigham helped to give deeper insights into the world of aerodynamics during the opening time trial of the 2021 Giro d’Italia and has been back during other major time trials too. A former F1 aerodynamicist, Bigham has turned his attentions to cycling and helped his track team beat national teams. After becoming a consultant for high-profile teams like Canyon SRAM and the Danish national track team, Bigham moved to Ineos Grenadiers for 2022.

A former national track champion, Hannah Walker spent years on the road racing as well. She retired from racing in 2018 whilst at WNT and transitioned to a Marketing/PR role for the team. She initially was heard commentating on women’s cycling races but has also been seen in the studio during coverage of 2021’s Giro d’Italia and a lot more since. For non-British based viewers she’s been on the world feed for Grand Tours.

A long-time member of the women’s peloton, Dani Christmas retired from racing at the end of the 2021 season and moved into the commentary booth. You could hear her a few times during 2021 already but Christmas has been heard more often in 2022 so far. Often paired with Marty McCrossan, you’re most likely to hear Dani Christmas covering women’s racing.

A new signing for Eurosport and GCN is the Aussie Robbie McEwen. He’s a familiar voice to anyone who stayed up late to watch racing in Australia, hosting with Matt Keenan and Bridie O’Donnell. Australian broadcaster SBS unceremoniously let him go at the end of the 2022 racing and so it’s no surprise to hear him over in Europe given he had such a high reputation. The former sprinter has an eye for racing detail and analysis.

Usually, in the studio leading The Breakaway pre and post-race segments, she leads and guides the other presenters to discuss the stage or race of the day. She’s a regular member of the Cycling Podcast and has been covering cycling for a long time before joining the Eurosport and GCN team.