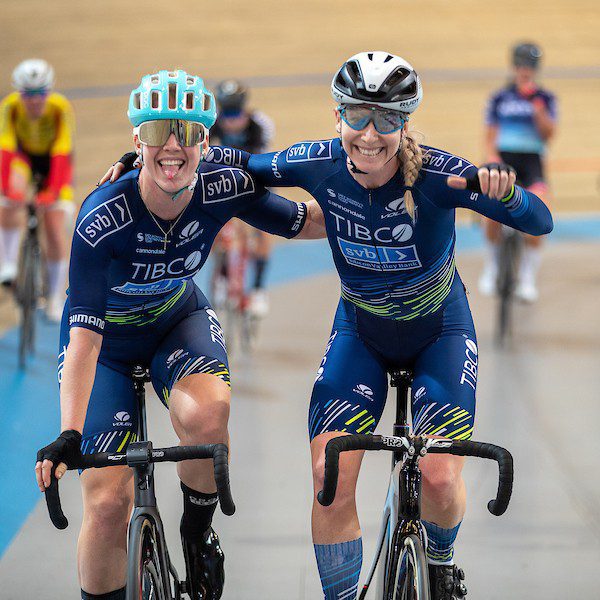 The 2021 Dutch National Track Championships have just taken place, just about squeezing into the 2021 calendar year. A decent contingent of road riders was there for the track championships. Some you’d expect from the Olympics teams and others a little bit less known for their exploits on the boards of the velodrome.

The Points race was won by young talent Deniek Hengeveld from Juliet Eickhof and Marit Raaijmakers. Hengeveld rides for GT Krush Tunap and will continue with them in 2022. She impressed women’s cycling fans with a solo break at the Healthy Ageing Tour at the beginning of 2021 and is one to watch for the future. Juliet Eickhof raced for Van Assche-Veloloft CT in 2021 and has shown talent against the clock. She was 6th in the TT at the Watersley Womens Challenge and was 15th at the Chrono des Nations. Impressive results for a rider below UCI Continental level at the moment. Marit Raaijmakers is a regular on the track, being part of the Dutch team pursuit team at the European Championships this year. She races for Parkhotel Valkenburg but will be moving to Human Powered Health in 2022.

Another young talent, Amber van der Hulst won the Scratch race. She took the win ahead of Marit Raaijmakers and Marjolein van ‘t Geloof. Van der Hulst has had a great season for Parkhotel Valkenburg and has earned herself a Women’s WorldTour contract with Liv Racing Xstra in 2022. It’s no surprise to see Raaijmakers up there on the podium again. Drops Cycling’s Marjolein van ‘t Geloof took a number of strong sprint results on the road in 2021, she’ll be at Drops for both 2022 and 2023.

The Individual Pursuit saw Deniek Hengeveld take another victory. Once again ahead of Juliet Eickhof and with Tessa Dijksman completing the podium. Dijksman raced for Jan van Arckel in 2021 at the GP Beerens and Tour de Feminin in the Czech Republic.

The penultimate race was the Elimination race. Marit Raaijmakers finally took her first victory of the national track championships after coming close in each event so far. She managed to outlast Daniek Hengeveld and Amber van der Hulst to take the gold medal and jersey. Daniek attacked first but Marit was able to reel her in and come past in the final straight.

The final event, the Madison, saw a number of riders put together in pairs. Nina Kessler and Marjolein van ‘t Geloof took their first victories of the championships. They beat the pairs of Amber van der Hulst/Daniek Hengeveld and Lorena Wiebes/Marit Raaijmakers in the final sprint. There was originally a question about whether the Madison race would be able to take place due to the numbers. Luckily enough riders were able to take part for Kessler and Van ‘t Geloof to earn the national jersey. In fact, it was Lorena Wiebes’ first-ever Madison race, so a podium is a good result for her!

“I still got a jersey. In the individual parts I made some tactical mistakes and I didn’t manage to win. It all came down to the very last sprint. Marjolein let me know that I had to do it. The relay was good, but in the sprint “The legs blocked a bit anyway. That was even more true for the others luckily. And so we won anyway. It was nice to race with Marjolein and then also win.”

One of the major names missing was Amy Pieters who is still in an induced coma, recovering from a crash in training in Spain on December 23rd. As a result of the crash, Pieters had surgery on her head to relieve pressure build-up but other than confirming a further coma period, there have been no further updates on her injuries.

The training camp was with members of the Dutch national track team with many of them attending here. Yoeri Havik has talked about the emotion of racing here whilst Amy was in a coma still. Those emotions were also evident after winning the Scratch race here. Amy’s family encouraged him to race saying ‘it wouldn’t make sense to stare at the walls’ during this time.

Daniek Hengeveld had left the camp before the crash but also had doubts about racing.

”I doubted for a while whether I wanted to drive, after the accident of Amy Pieters at training camp. I had trained with her until the day before the accident. But I think Amy would have wanted this too”