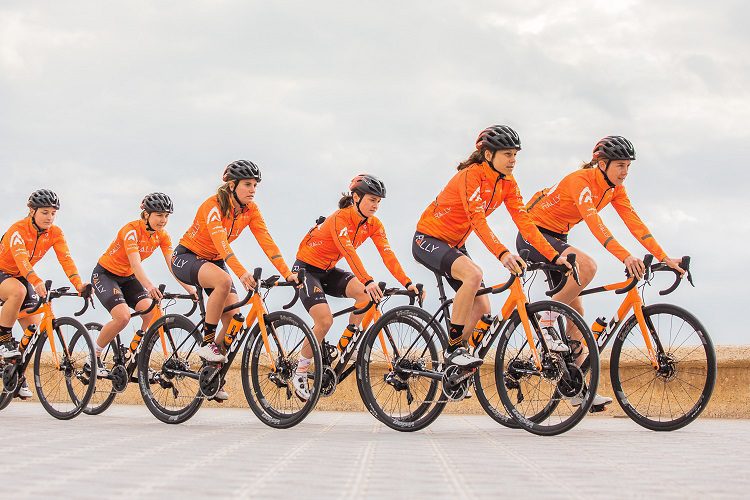 Rally Cycling didn’t get the fullest race calendar in 2021. With the UCI American season pretty much gutted, they had to rely on wildcards for entries into most of the European races. As a result, we didn’t see them until near the end of April at Fleche Wallonne. Kirsta Doebel-Hickok took the team’s best result there with 14th. During May, Rally did a full set of Spanish races. Doebel-Hickok was again one of the best riders, taking a top-10 at the Navarra Elite Classic. The end of May saw the best result of the year, Clara Koppenburg finishing 4th in the WWT level Vuelta a Burgos.

Rally had to wait another month before racing again, Koppenburg again getting the best result of 25th at La Course. That led to a tough Giro Donne for the outfit, all 6 of the riders ended up DNFing the major stage race. The season came to a relative early close at the end of August with the Joe Martin Stage Race. Heidi Franz was the pick of the riders, getting a GC podium spot with 3rd. Rally did technically take race wins in 2021, their rider Olivia Ray won Gravel and Tar in January whilst racing for a New Zealand national team. Ray also won 6 USA Criteriums, including the big payout on offer at the Into The Lions Den race hosted by L39ION.

Marit Raaijmakers finished 2021 in great form and I’m hoping she can continue at that level into the spring classics part of the 2022 season. By joining the Women’s WorldTour, Human Powered Health won’t have to worry about invites to races which should give greater opportunities for Raaijmakers. The young sprint talent on the team is almost scary. Kaia Schmid is making people take notice of her and it’d be great for American cycling if she can make an immediate impact.

The Kiwi Olivia Ray has been making that impact this year but unless you’ve followed the non-UCI American criterium scene, it’s been on the quiet. She could surprise some of the European riders and teams in 2022. She’s been joined by Kiwi Henrietta Christie who won the youth jersey at the Tour de l’Ardeche. You’d hope to see yet more progression on the climbs next year.

Barbara Malcotti should get more assistance here compared to the sprint focused Valcar team. Together with Nina Buijsman, the young pair will get most of the shots on the lumpy races that require some climbing ability. Malcotti could even spring a surprise at a major race like Fleche Wallonne.

Rally Cycling has done a tonne of business this off-season. They’ve done particularly well with their youthful talent signings but blended it with some experienced heads as well. Kröger will be a road captain who can get TT results, she’s also got a massive engine for pulling back attacks. Eri Yonamine will also perform the captain role for the team after a tough year at TIBCO. She’s had surgery in the off-season so might not be around early on in 2022, but will be valuable. Evy Kuijpers is another experienced rider who will be a great engine to have to pull the team at the front of the peloton.

Marit Raaijmakers has finally left Parkhotel Valkenburg and was looking increasingly impressive at the end of 2021. She could become a great one-day racer with a bit of a kick at the end of races too. Barbara Malcotti is a great steal from Valcar too. She’s looking like a great climber and maybe a future GC rider too. It’d be great if these riders can make an impact in 2022 but we may have to be patient and let them develop for a year or two first as well.

Kaia Schmid is the young rider with the most hype. She nearly won the Junior Worlds in Flanders, just losing out to Zoe Backstedt. She was on my radar before then after an impressive Ras na Mban, 2 stage wins and 8th in GC. She is really going to be one to watch for. Makayla MacPherson also took a stage win in that race and the young American pair will be great assets.

Finally, Nina Buijsman finished the season strongly with a series of top-10 results in one-day races. Uphill finishes and reduced bunch sprints seemed to suit her and she’s joined from Parkhotel Valkenburg with Raaijmakers. Buijsman likes a breakaway too, which saw her win the mountains jersey at the Tour of Norway, giving Human Powered Health more attacking options.