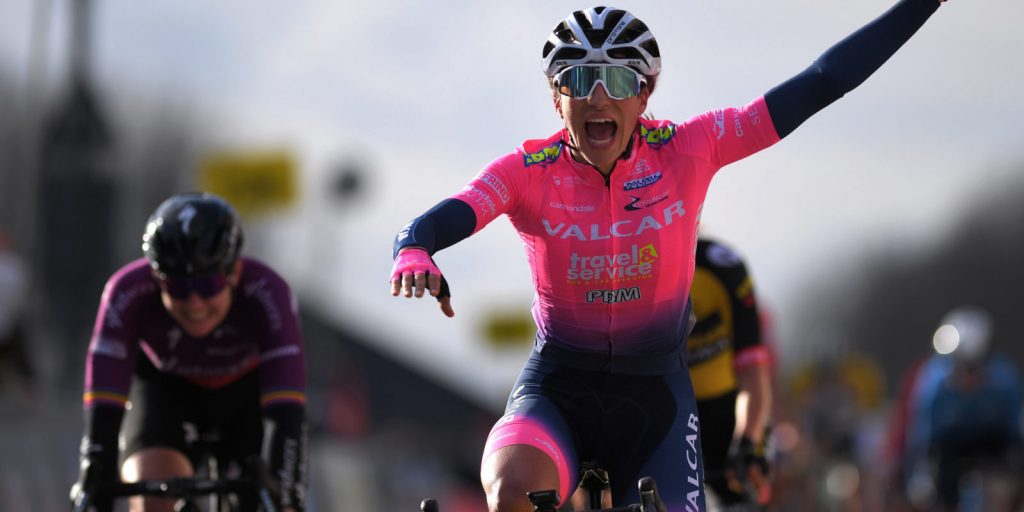 The GP Oetingen is a new race for 2021 but isn’t a completely new idea. It’s a new version of the Gooik-Geraardsbergen-Gooik race held between 2011 and 2018. The finishing circuit of that race has been largely reused for the GP Oetingen. A slightly longer triangle forms the route this year whereas previously it was more of a trapezium – a triangle with the top chopped off.

The main point of note on the circuit is the Bergstraat. The climb lasts 500 metres at an average of 8.4% and peaks at 11%. It won’t last much more than a minute for the best riders in the field but will be tackled 10 times in the race. Riders wanting to do well will need to crest the climb in the main group, survive the descent and have enough energy for the sprint. Traditionally punchy sprinters won Gooik-Geraardsbergen-Gooik, Marianne Vos winning 3 times and Gracie Elvin twice. A young, 19 year old, Lotte Kopecky was 2nd in 2016. The finish line is closer to the Bergstraat in the GP Oetingen so the climb will be even more important.

The winner of Strade Bianche is off to a flyer in 2021. Chantal van den Broek-Blaak was a solid 11th at Omloop het Nieuwsblad but won last weekend by picking the right attack to go with. She rode Longo Borghini’s wheel and stayed fresh enough to jump the Italian on the final climb. She’s got a good history at the predecessor race here, finishing 5th in 2015 and 2016.
Amy Pieters seems well suited to this race with a good sprint and is also in great form. 3rd at Omloop has been followed up with more top-10s at Le Samyn and Healthy Ageing Tour (plus 5th Overall). She also had 4 top-10 finishes at Gooik. Continuing with the stacked SD Worx team, if there’s a big bunch near the finish then you also can’t rule out Jolien d’Hoore for a sprint finish. She’s already won a stage of the Healthy Ageing Tour this year. Elena Cecchini has been solid on her new team so far in 2021, she’s yet another great SD Worx rider who may get a chance here. Lonneke Uneken also just took an epic solo win at the Healthy Ageing Tour. She just missed out on winning the GC on home roads too. She’ll probably return to a team role here but can’t be ruled out as well!

Team BikeExchange should be working for the newly crowned Australian national champion Sarah Roy. She’s more than useful in these sorts of races, finishing off 2020 with 3 top-5 finishes in major classics. She’s a former winner at Gooik, taking the victory in 2018. Valcar’s Elisa Balsamo was 3rd in that edition of Gooik-Geraardsbergen-Gooik and returns to the area in 2021. She’s had a quiet start to 2021 with 19th at Omloop het Nieuwsblad her best result, however this is the first race of the season that really suits her. Balsamo won her final race of the 2020 season at the Ceratizit Challenge which hopefully will give her confidence she can deliver more in 2021.

Maria Giulia Confalonieri is still able to get strong results for Ceratizit, she was 8th at Plouay and 7th at Brabantse Pijl last season. She’s more than capable of getting over the berg here and then have a sprint in the final. She’s another rider to have done well at Gooik before, finishing 7th and 3rd previously. Canyon SRAM’s Alice Barnes will feel like she’s in good form after finishing 2nd in the first stage of the Healthy Ageing Tour and 7th Overall. She hasn’t raced a version of this race before so might have a disadvantage in not knowing the climb or local roads. A reduced bunch sprint will suit her best of all.

Karlijn Swinkels was 3rd in the first stage of the Healthy Ageing Tour, netting her best result since 2019. The young sprinter will be hoping for a calm race on the climb to give her the best chance of victory. Her teammate Romy Kasper might become the better option. She’s able to negotiate some of the climbs better and found herself 10th at Le Samyn des Dames this season. She ended up 13th at the Healthy Ageing Tour. It’s a good chance for the Jumbo Visma riders to get their own results with no Marianne Vos on the startlist. Scratch that! Marianne Vos has appeared on the startlist for her 2nd race of the 2021 season. She was 7th at Strade Bianche and this race is absolutely one for her to win if she’s going for it. The climb won’t cause any issues and she can sprint at the end as well.

Franziska Koch has Team DSM’s #1, so might be getting an opportunity here. Like the rest of the team, the 2021 season hasn’t started well and she was a little bit quiet in the COVID affected 2020 season outside of the European Championships. If she can re-find some of the 2019 results that saw her win a stage of the Boels Ladies Tour, she’ll be a contender here. Team DSM also have Susanne Andersen who was 14th on the brutal final stage on the VAMberg at the Healthy Ageing Tour. She’s another who could crest the climb and do well in a reduced bunch sprint.

Doltcini’s Kathrin Schweinberger tends to get her best results on flatter courses. Yet she was 15th at the last Gooik-Geraardsbergen-Gooik in 2018. Her 2020 season was quiet, other than becoming Austrian national champion for the first time. So far in 2021, she’s finished in the 30s at both Le Samyn and Omloop het Nieuwsblad. But this lower-rated race might see her improve on those results.

Christina Siggaard‘s career feels like it’s stalled a little over the last couple of years. After being a young rider to watch in 2017 and 2018, winning 2018’s Omloop het Nieuwsblad. She then struggled to replicate that form in 2019. Her 2020 season saw just two races. A DNF in the flat GP Euromat and 14th in the Danish national championships. Hopefully, 2021 provides a needed reset and she can reattain those heights. This course seems suited to her in good form. Silvia Zanardi is a useful young Italian sprinter for BePink. She finished 2020 with 5th and 6th places at the WorldTour ranked Ceratizit Challenge. She’s got a little bit of experience racing in Belgian 1.2 level races already. Plus it feels like she’s going under the radar currently.

Parkhotel Valkenburg have a pair of options in Femke Markus and Amber van der Hulst. Markus finished 11th in Le Samyn to get her 2021 season off to a good start. Then she was solidly there in the Healthy Ageing Tour as well. She may prove to be the lead-out for Van der Hulst, who is the next sprinter talent to come from the team. Previously, it looked like Amber Van der Hulst achieved her best results in flat races. But this week she’s just taken a great 8th on the VAMberg stage of the Healthy Ageing Tour. With that in mind and her continued development, she becomes a great contender for this race.

Drops-Le Col rider Marjolein van ‘t Geloof started the 2021 season off well, finishing 5th at Le Samyn. She was then 9th on the Assen track during Stage 1 of the Healthy Ageing Tour. She was one of many riders to DNF the brutal VAMberg stage though. Hopefully, all it means is that she was saving the legs for GP Oetingen with only a couple of days in between the races. She appears in good form and the Bergstraat shouldn’t pose any issues.

BikeExchange’s Jessica Roberts is a young hopeful in her first race of the 2021 season. She’s got a big engine and is looking for consistent strong results in 2021. Her best result in 2020 was 5th at the Herald Sun Tour and she took a good 15th Overall at the Ceratizit Challenge, thanks to her time trial. This might be the year we see Roberts get more results for herself. The team also has Teniel Campbell who started off 2020 so well before struggling when the season started again. If she can regain the form that saw her finish 3rd at the Vuelta Ciclista and 5th at Omloop van het Hageland in 2020, she’ll be dangerous once again.

Movistar’s Jelena Eric has been visible in races during 2021 so far, going on the attack with Lotte Kopecky and Christine Majerus at Le Samyn. She ended up 28th in that race and 31st at Omloop het Nieuwsblad. This slightly easier race in the vein of Le Samyn should give her an opportunity to improve on those results. Normally, Floortje Mackaij would be a big favourite for an attack in this sort of race. But so far in 2021 Team DSM haven’t been firing well at all. She crashed at Strade Bianche but pushed on despite that setback to finish 28th. At her best, she has the capability to attack the final a lap before the end and hold off the bunch to the finish.

Jumbo Visma’s Teuntje Beekhuis gets the team’s #1 race number for GP Oetingen. She’s had solid results in 2021, averaging around 30th place before finishing 8th at the Healthy Ageing Tour. It’s a reflection of her role to the team in supporting other riders. With Beekhuis being given her #1 number, that may mean she’s the rider the team are working for here. Hopefully, she can score another top-10 result with that opportunity. Bingoal Casino-Chevalmeire’s Natalie van Gogh sprinted to 16th at Le Samyn and this lower-level race likely to finish in a sprint suits her. Probably an outsider for the top-10, there’s no reason she can’t finish in the teens once more.