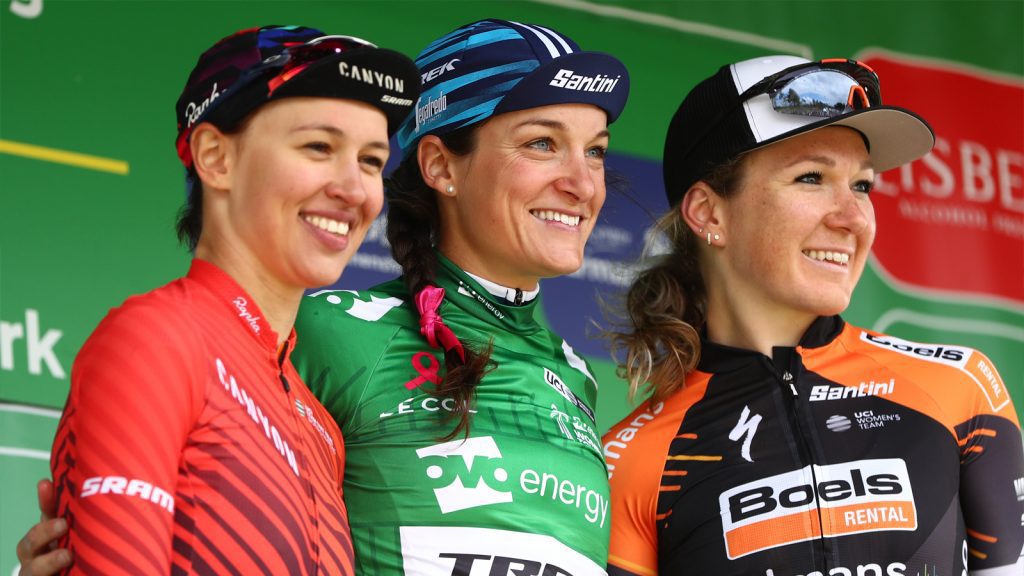 Officially this race is just called the Women’s Tour, but with the Tour de France Femmes coming, it all feels just a little too vague. The Women’s Tour is another race affected by COVID last year, with no race taking place. This season’s race was postponed from its usual spot in June for the same reason, so it feels a lifetime ago since Lizzie Deignan won the 2019 race – 27 months in fact!

This year’s stages look tailor made for sprint finishes in the main. Some late climbs on a couple of the stages may thin out the peloton a touch but riders will have to be feeling very good to make a break stick. The only thing in their favour is how poor the women’s peloton has been recently at judging the catch to breakaway riders! All this means that bonus seconds and the time trial will provide the focal points of the general classification battle. We’ve seen simple looking races on paper turn into particularly tough races in the British Isles. The weather isn’t looking great at the start of the week with rain forecast the first two days. But it is now not looking like the rain-fest initially forecast.

One of the major issues going into this race though is the lack of promised live TV coverage. All races in the Women’s WorldTour have to provide at least 45 minutes of live coverage since 2020. With no race held last year, the Women’s Tour gave itself an extra year to try and ensure it met the criteria. Unfortunately, it looks like the coffers are empty currently. Previously the Women’s Tour also paid equal prize money to the men’s Tour of Britain which made it popular. This was ahead of its time compared to many races but even that looks like it’s now been stopped. It calls into question how a race, previously thought a gold standard in organisation, will fare next season. Will it be dropped out of the WWT like the Giro Rosa was for a similar reason?

n.b a large number of riders have had to withdraw from the Women’s Tour after that brutal Paris Roubaix race this weekend.

We may as well start with the last winner of the Women’s Tour, Lizzie Deignan. I don’t think this year’s course suits her as well as previous years. For one it’s flatter and the introduction of the time trial will negate some of her advantages. There are some possible long moves available on Stages 1 and 4 but it feels a long shot. Teammate Elisa Longo Borghini probably has a better shot. She will do less well in any sprints but should be a bit better in the time trial which will serve her well in the GC battle. That leaves Ellen van Dijk as the best all-round option. She can mix it with the front groups, head on breaks and win the time trial too. If the likes of Deignan and Longo Borghini work for her, she will be a legit GC threat. Chloe Hosking is now on the start list and will provide a great sprint option for the team. She’s won stages of the Tour de l’Ardeche and Tour of Norway recently.

Canyon SRAM has a good team here. Kasia Niewiadoma won the 2017 Women’s Tour and was 2nd in 2019 too. Similar to Deignan though, I don’t think this course particularly suits her. With minimal climbing and a limited TT for Kasia, it doesn’t feel like a GC battle for her. Elise Chabbey has done well on rolling courses all year and also has a decent time trial. She could turn into a dark horse here.. Between them, the Barnes sisters also present a threat on the flat stages. The team will probably favour Alice Barnes with Hannah leaving shortly. She has had better results in sprints over the course of the year. Hannah Barnes also has her own good results but more fleetingly.

Demi Vollering was a slightly controversial 7th at the World Championships. She struggled with bike changes during the race, otherwise, she might’ve finished higher. She was accused by some of not working for Vos though. This parcours might be ok for her, she can time trial well and the rest of the race can see her make moves. Her teammate Amy Pieters probably has the best chance of taking stage wins for the SD Worx team. And if in doubt, why not get Chantal van den Broek-Blaak to go on the attack too.

The Ale BTC Ljubljana pair of Marta Bastianelli and Marlen Reusser will be contenders at different points. Bastianelli will fancy her chances in quite a few of these stage finishes. With slightly tough stages leading into bunch sprints, that will favour someone like Marta over some of the pure sprinters. Marlen Reusser has a really strong chance at the GC battle. The time trial will surely give her an opportunity to gain time over most of her rivals and the hard racing will suit her too. Where she may struggle is when others are more likely to pick up bonus seconds in sprints to negate her time earned against the clock.

It looks like Evita Muzic will get the lead role for FDJ Nouvelle Aquitaine. She’s not a bad time triallist but I think the race won’t be hilly enough for her to really do well. If you go back a couple of years, this race would be right up Stine Borgli‘s street. She’s had a few flashes of returning to the 2019 form this year with top 10s at the Tour of Norway and Dwars Door Vlaanderen. Time trialling isn’t as strong though so she will probably be hunting for stages rather than the Overall.

Parkhotel Valkenburg’s Amber van der Hulst will also be hunting for stage wins. Somehow, she hasn’t won a race in 2021 but she’s been a really consistent top 10 finisher. It’d be great if Van der Hulst can sign off 2021 with a win in the Women’s Tour. Sarah Roy hasn’t won a race since winning Aussie Nationals back in February. She’s got a good history with the Women’s Tour, winning stages in 2017 and 2018. She’s had a couple of good results recently so will be a stage contender again.

Liv Racing have plenty of options. Lotte Kopecky is the main one for the team. She’s got a great chance to take multiple stages and the overall classification. The parcours is almost perfect for the sprint who can climb a touch too. Winning stages at the Ceratizit Challenge and Trophee des Grimpeuses shows good form, even if her Worlds result wasn’t as good as predicted. Teammate Alison Jackson is in good form too and will either be in a supporting role to Kopecky or given a bit of free reign to make attacks herself. She’s just signed a new contract with Liv so will be full of confidence. Soraya Paladin is also another option, particularly with attacks in mind. She’s been quiet since scoring 5th place at the Giro Donne in July.

American Kristen Faulkner has a chance for stage wins here. She was in great form until her crash at the Ceratizit Challenge. A pair of 3rds at the Ladies Tour of Norway and GP de Plouay was turning into a promising final part of the 2021 season. Drops’ Joss Lowden just set a new hour record on the track and will still be full of confidence. 8th in the World Champs TT means the Atherstone time trial here will be no problem. She’ll want to finish the season on a high before moving to Uno-X in 2022.

Movistar isn’t coming with the big guns but they’ve still got Sheyla Gutierrez and Jelena Eric for them. Gutierrez hasn’t had as many opportunities this season but had 3 top-3 finishes at the Setmana Ciclista Valenciana. She could do with getting something similar in the UK. Jelena Eric is in a similar boat with Norsgaard performing so well. She had promising results in the spring, just missing out at Ronde de Mouscron. Between them, this Movistar pair can win stages.

The new world champion Elisa Balsamo will be hoping to repeat that success. There are plenty of opportunities, especially with the impressive Valcar lead-out train. Her teammate Vittoria Guazzini might have a shot at the overall here. Guazzini just won the U23 TT at the European Championships so should fare ok in the time trial stage and gain time. She’s also shown she can do well on lumpy courses by finishing 4th at Dwars Door Vlaanderen.

Another young sprinter looking for stage wins is Lorena Wiebes. She has 10 wins this season but she will have only raced Paris Roubaix since crashing in the Simac Ladies Tour. It adds an interesting element of doubt to what would normally be a dead cert. French teammate Juliette Labous stands a chance for the overall with her time trialling ability. She’s another who surprisingly hasn’t won in 2021 but she’s been really consistent throughout the year on many courses. She could be on the final podium. Liane Lippert started the year quietly but has come into form again late on. 3 top-10 finishes and 5th Overall at the Ceratizit Challenge was followed by 2nd at the European Championship. Maybe this year’s course isn’t hilly enough for her to really shine though.

CAMS Basso rider Hayley Simmonds is always worth a shout when there’s a time trial involved. The multiple national champion doesn’t quite have the same success in UCI races, the subtle differences in required positions not helping things. On home roads, on a flattish course and the perfect 10 miles for a British time trial, she can finish well up there.

The TIBCO pair of Abi Smith and Veronica Ewers may be able to spring some surprises. They both joined the team recently and Abi Smith has started well. The 19-year-old has finished 17th twice and also 16th in her races so far. Two of those have been at Women’s WorldTour level too. Veronica Ewers is a bit older at 27 but caught the attention of TIBCO when she finished 3rd in the US Nationals. She followed it up with 2nd Overall at the Joe Martin Stage Race and 5th at the Tour de l’Ardeche. She could potentially spring a big GC surprise this week.

Pfeiffer Georgi is beginning to carve out a bigger role on Team DSM and after winning GP Fourmies will have bags of confidence. She was also 6th at the Simac Ladies Tour that also saw her take the youth jersey too. On home roads in the UK, she will know what to expect and will hope to be in the top-10 once again. It will depend slightly on how close Lorena Wiebes ends up being in the GC hunt.

Finally, is another Brit in Dani Christmas. She was 10th at GP Fourmies recently but I’m expecting her to be busy getting into the breaks each day. It’s a role she performed at the Festival Elsy Jacobs earlier in the year. With how the women’s peloton has let breaks win in the last few months, if you can get away, then you may just stay away and take the glory.