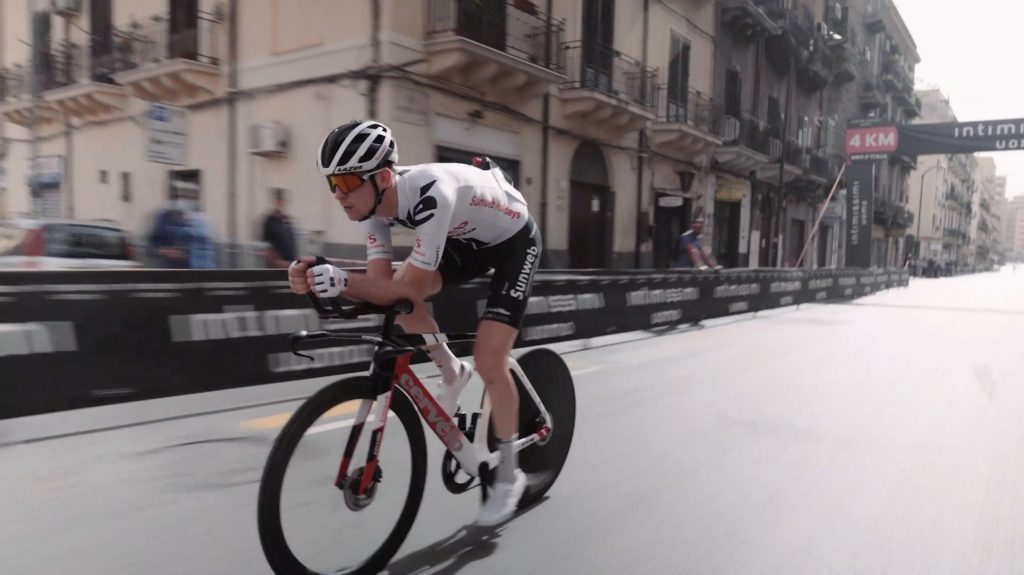 The men’s time trial has the serious issue of the Gnadenwald climb, 2.6km at an average gradient of 10.5%. This may take this year’s time trial away from the out and out time trial specialists and more into the hands of those GC contenders that can time trial well. Other than the initial climb and Gnadenwald, the parcours is relatively flat – a final small uphill gradient to the finish will keep riders honest though.

Tom Dumoulin is the obvious favourite, he’s the incumbent winner of this event but is also one of the few riders to genuinely excel at both GC and time trials. The hill will present issues to most of the other out and out time trialists and will be where the race is won and lost. Dumoulin showed last year that he can climb well on a time trial bike and not lose time as a result. He’s a massive favourite and anything other than a win will feel like a loss.

Next up is the Australia Rohan Dennis who has been bossing time trials in 2018. He ended up 8th last year after a crash but should be on the podium in 2018. He won 3 of the 4 time trials at the Grand Tours he raced this year (Giro & Vuelta) as well as winning time trials at the Nationals, Abu Dhabi & Tirreno-Adriatico for good measure. In theory he’ll lose time on the hill to Dumoulin, but he should end up in the silver spot.

Third spot is more up for grabs, my punt will be for Michal Kwiatkowski. He finished 5th and 2nd in the Vuelta TTs recently but also finished 4th in the TT at the end of the Tour de France. He also makes up a strong Team Sky for TTTs that hasn’t finished lower than 3rd in races he’s taken part in during 2018. The climb will suit his strengths more than some of the other mainstream time trialists as well so he’ll gain more time than normal on that section.

Joint record holder – 4 time winner Tony Martin can never be ruled out, although his time trial results this season are not the same dominance that he used to have. The only time trial he’s won in 2018 was the national championships but he’s also finished 2nd in the main Giro TT.  Other than that he’s got 9th in the Giro prologue, 22nd at the Tirreno-Adriatico TT and 6th at the Volta ao Algarve TT. If he’s having a good day, he’ll find himself on the podium but it’s less of a certainty than it used to be.

Two-time European TT Champion Victor Campenaerts is another with an outside chance at the podium but a top-5 is probably more likely. He’s won his national TT champs this year, but he tends to get his best results in shorter races near the start of a stage race. There’s a noticeable drop-off between his 2nd in the Volta ao Algarve TT, 3rd in the Vuelta Prologue, 3rd at the Giro Prologue and 4th at the Dauphine prologue to 11th at the later on Giro TT and 12th in the Vuelta TT. The hill will be the difference-maker for him.

In a similar vein to Tom Dumoulin, Luxembourger Bob Jungels will be hoping that a time trialling GC contender build is the one that will prove most effective in this World Championships. No rider from Luxembourg has found themselves winning a medal in the World Championship TT, so that gives Jungels something to aim for. He’s the national champion, finished 6th in the Tour de France TT, 7th in the Dauphine prologue and 8th at the Volta ao Algarve. A solid GC contender time trialist, he’ll be hoping to gain time on the climb to get a higher position.

Jonathan Castroviejo has spent most of his season pulling Team Sky leaders up the early stages of long climbs, before getting to play on his TT bike for himself. He managed 3rd in the Vuelta TT and 7th in the Vuelta Prologue, he was 2nd in the European Championships TT, 4th in the Basque TT, 3rd in the Tirreno-Adriatico TT, 2nd in Adu Dhabi and won his National Champs. He’ll lose time on the climb so a top-5 is probably a realistic aim.

Just like the women’s TT, the Netherlands have a few options to get behind. Wilco Kelderman finished 3rd in the Nationals this year as well as 10th in the Vuelta prologue and 5th at the Abu Dhabi Tour. Less of an out and out time trialist, his GC background should allow him to make it up the climb quicker than plenty of the others and swing the time back into his favour.

Failing that, there’s even another Dutchie – Jos Van Emden. He’s been somewhat inconsistent in time trials in 2018, the highs of 2nd in the Tirreno-Adriatico TT, 4th in Abu Dhabi and 4th in the Giro TT have been offset by a disappointing 5th in the Nationals, 8th in the Europeans, 15th at the BinckBank Tour and 33rd in the Giro prologue. As a proper time trialist, he’s another that’ll lose time on the climb though and will be very happy with a top-10 result.

British hopes are for Alex Dowsett. He’s probably more in the top-10 conversation after results of 5th and 6th in the Giro TTs, 5th in the European Championships TT, 6th in the BinckBank Tour TT and 8th in the Tour of Slovenia TT. He didn’t win the Nationals this year, finishing behind a dominant Geraint Thomas and the upcoming Harry Tanfield. He will struggle relative to some others on the climb as an out and out TT-er.

Swiss rider Stefan Küng will be hoping to take up the mantle that Cancellara left. Küng has won a couple of time trials in 2018, at the BinckBank Tour and at his home race, the Tour de Suisse. He also won his National Championships too. Aside from that there’s been 7th in the Europeans and 12th in the Giro TT. All of the TTs he’s won this year have been relatively flat ones so that climb should present a challenge.

Movistar’s Portuguese rider Nelson Oliveira finished 4th in the World Championships in Bergen last year, in large part to his decision to swap his TT bike for a road bike for the final climb there. There’ll be less advantage in doing the same this year as the steep climb is too far from the finish to gain an advantage. Nevertheless he’s shown he can climb reasonably well. He managed 4th and 7th in the recent Vuelta TTs, 5th in the Volta ao Algarve TT, 10th in the Tour de Suisse TT and 15th in the Tirreno-Adriatico TT. He’s one who is capable of a top-10 and could maybe stretch to a top-5 on a really good day.

Vasil Kiryienka is a former winner and has finished 2nd and 3rd in this event in the past. Another one who’ll lose time on the climb, he should be happy with a top-10 result. His best results in 2018 are 3rd at the Tour of Basque Country TT, 9th at the Volta ao Algarve TT and 10th at both the Giro TT and the Tirreno-Adriatico TT.