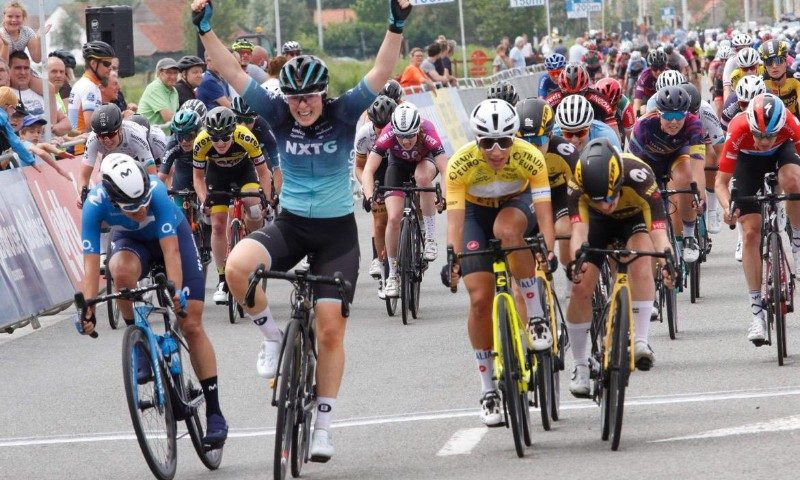 The Baloise Ladies Tour has also been known as the BeNe Ladies Tour in the past. First run in 2014, that year’s race was won by Emma Johansson. Jolien d’Hoore finished 2nd that year before taking a pair of wins and Marianne Vos a pair of victories herself. Lisa Klein won in 2019, a year after winning the best youth rider jersey by finishing 2nd overall in 2018. The race rewards sprinters who can time trial to claim the high GC positions.

The BeNe part of the name recognised that the race travelled between Belgium and the Netherlands, which the race continues to do. This year the race begins in Utrecht before a long transfer to Eeklo, just over the border into Belgium. The next day flirts with the border, starting in the Dutch seaside town of Cadzand and finishing just 10km away directly over the border at Knokke Heist. The race stays there for a day, with a time trial heading inland. The final day is a generally flat affair down in East Flanders near to Zulte.

All times are in BST

The Baloise Ladies Tour suits Lisa Klein perfectly. She can certainly time trial, is a great classics rider and also has a bit of a sprint. She’ll look to gain time against the clock and then keep herself in contention on the other sprint days. She was 6th Overall at the Healthy Ageing Tour in a similar sort of race and parcours. Her teammate Alice Barnes is also in with a shout. She’s a strong sprinter and as the British national time trial champion, can also do well in that discipline. She took a stage win at the Setmana Ciclista Valenciana and 7th Overall in the Healthy Ageing Tour, almost matching Klein. 2nd at a stage of the Vuelta a Burgos saw Barnes come close to her first Women’s WorldTour victory. She won a stage of this race back in 2017 on her way to winning the youth jersey and finishing 2nd. Kasia Niewiadoma is here too and whilst the parcours doesn’t suit her, she’ll be an interesting card to play.

SD Worx appear to only be starting with 4 riders for this year’s Baloise Ladies Tour. That should give the other teams more of a chance! Luxembourger Christine Majerus can win these sorts of flat classics, taking the top step at Omloop van de Westhoek back in March. More recently, she was 2nd at Dwars door het Hageland. She can time trial well against this sort of field too. Her teammate Lonneke Uneken is also in with a shout. She’s more of a natural sprinter and took an impressive solo victory at the Healthy Ageing Tour. She was quickest on the VAMberg course and finished 4th Overall. She was 5th in the prologue at the Festival Elsy Jacobs and then 6th in the sprint at Dwars door het Hageland. Between them, this pair can finish on the podium.

Barbara Guarischi will be Movistar’s sprinter here and she’s come close to winning in 2021. 2nd at Vuelta CV Feminas was an eye-opening return to form after a quiet start to the season. She then finished 3rd in Dwars door de Westhoek and also 3rd in a Lotto Belgium Tour stage. Her time trial will affect her GC position but she’s definitely in the hunt for stage victories.

Anna Henderson has been a revelation this season, getting chances and fully adapting to the highest levels of the pro peloton. She just took a victory in a kermesse, an 80km solo break enough to secure the win. She’s scored consistent top-10s through the season so far, with a best result of 4th place on Stage 1 of the Thuringen Ladies Tour. She often defers to Marianne Vos in Women’s WorldTour races, so has to continue to impress in races like this. Her teammate Jip van den Bos might get the shout in the odd sprint after racing again post-concussion recovery. At the start of June, Van den Bos was 5th at Dwars door de Westhoek, a welcome return to form.

Amber van der Hulst is having a breakout year with consistent high placings. Despite an only ok prologue result, she still managed to finish 9th Overall at the Lotto Belgium Tour and we’ll probably see something similar at the Baloise Ladies Tour. Her best results so far are 3rd at GP Eco-Struct and Flanders Diamond Tour. She’s on the cusp of that first major victory.

Charlotte Kool is another young sprinter but isn’t quite as consistent as Van der Hulst. Her 2020 results post-Covid break were really impressive. She’s had plenty of DNFs in 2021 but 5th on day one of the Healthy Ageing Tour and 10th at Scheldeprijs show she is still one to keep an eye on. She’ll be more in the hunt for stages than the overall general classification.

Plantur-Pura have a couple of options for the Baloise Ladies Tour. Sanne Cant took a great 7th on a stage at the Lotto Belgium Tour for her best result on the road in 2021. These flatter stages should suit her and she’s hovered around the top-20 in 4 editions at the Baloise Ladies Tour. Yara Kastelijn also took her best result on the road in 2021 at the Lotto Belgium Tour. She was the 2nd rider up the Muur van Geraardsbergen on the final stage impressively. She’d shown previous glimpses on punchy courses with 15 at Dwars door Vlaanderen back in March.

Multum Accountant’s Ann-Sophie Duyck is a great time triallist with top-10s at the World Championships in previous years. With a prologue and a time trial in this year’s race, Duyck has a chance to gain time on other rivals. She won’t factor much in the sprints, so this is her real chance to gain time. She’s done well previously, finishing 6th in 2015. She’s been in a couple of long breakaways recently, so we’re likely to see her off the front too.

The Italian national team will have Elisa Balsamo as their major sprinter. She’s also able to use her track background to be good in prologues and time trials. She’s surprisingly only taken one victory in 2021, way back in March’s GP Oetingen. She’ll be a contender but will also have one eye on the Tokyo Olympics, so will be desperate to stay out of trouble. Letizia Paternoster would be great at this race in her 2019 form but she’s another who’s been gearing up for the Olympics throughout all of 2020 and 2021. She’s done the odd race but without a result to shout about.

Thalita de Jong seems to have recovered from her crash at the Thuringen Ladies Tour, returning with 13th at Dwars door het Hageland. She’s less of a sprinter but her consistency on all terrains and solid prologue could see her do well in GC. At the Festival Elsy Jacobs, she was 4th in the prologue and ultimately finished 5th Overall.

Anna Kay had a great cyclocross season and showed some of that quality on the road at the Lotto Belgium Tour. She was 10th on the Muur van Geraardsbergen, which boosted her GC position to 23rd Overall. That top-10 was a great result and whilst she may suit punchier courses, her all-round ability could see her results here.

Stade Rochelais’ Elodie de Bail was 3rd at Vuelta CV Feminas which is comfortably her best result of the season. It showed that she can sprint well though with the right opportunity. Against this field, a top-10 in a sprint would be a great result. I’ve also seen Arianna Pruisscher mentioned but she isn’t on the provisional start list. She’s been in great form at S Bikes Doltcini before moving to Stade Rochelais recently. She’s taken top-10s at Ronde de Mouscron, GP Eco-Struct and at the Lotto Belgium Tour too. Will be interesting to see how she does at her new team.

Mieke Kroger was 4th in this race in 2019 but has had a quiet 2021 season. Her best result of the year has been 14th against the clock in the Healthy Ageing Tour. She used to have the odd sprint but if she does do well here, it’ll be in the prologue and in the time trial. At her best, she can gain enough time in those stages to finish high up overall.