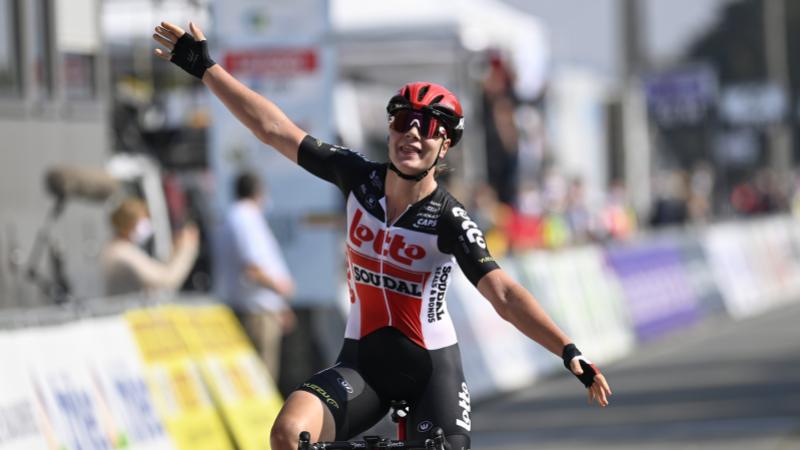 The Lotto Belgium Tour will have its 9th edition in 2021 after taking a year off because of Covid. The race still holds its 2.1 level designation but its winners list has some big names on it. Some are listed below but Ellen van Dijk and Emma Johansson have also taken victory here. Most editions have contained a time trial element to help separate the contenders in the general classification. At one point it was a team time trial but since 2017 a short prologue has been used.

Stage 1 is absolutely flat and is nailed on for the sprinters, provided the wind doesn’t get up and cause echelons. Stage 2 is lumpier but still should come down to a sprint. Anyone with GC ambitions will be looking to keep themselves out of trouble until Stage 3. Sprinters who have done well against the clock and picked up bonus seconds will try to cling on up the Muur van Geraardsbergen. The stage finish is just up and over the other side, so maybe one or two riders will have a short, technical sprint. The race will be blown apart here in Oudenaarde in the last couple of km.

Lorena Wiebes is in cracking form and could take the leaders jersey after Stages 1 and 2. She’s shown before that a prologue is doable for her and probably won’t lose much time there. Wiebes won her last two races at Dwars door de Westhoek and Flanders Diamond Tour. She’s a big-time favourite for stage wins but is also an outsider for the overall GC. It’ll come down to the final climb in Geraardsbergen on Stage 3.

Canyon SRAM has a pair of decent options for GC and stages. Alice Barnes can certainly time trial, so shouldn’t lose much time in the prologue. She’s been sprinting on and off in 2021. She took a notable 2nd ahead of the big crash at the Healthy Ageing Tour and then won a stage of the Setmana Ciclista Valenciana. Last month she won the bunch sprint behind the solo stage winner at the Vuelta a Burgos. She’s capable of placing well but someone like Wiebes will be quicker, the Muur might break GC ambitions. Alena Amialiusik is a great classics rider but often had to downplay her role in support of Niewiadoma in the spring. She’s not raced since Liege Bastogne Liege so should be fresh. Her best result of the season was 14th at Brabantse Pijl but this could be her first real opportunity of the year.

Audrey Cordon-Ragot is the new French national TT champion, she’s naturally got a chance in the prologue. She wasn’t far off retaining her road race title either, just missing out in the sprint. She’s been solid in her racing for Trek Segafredo in 2021 without a big result – always working for another team leader. Amalie Dideriksen took her first win of the 2021 season in her national championships. She impressively beat out Emma Norsgaard in the final sprint. She can certainly carry that through and be in the mix in the sprints here. Ellen van Dijk is still on the return from Covid but was an impressive 2nd in the Dutch Nationals TT last week. In peak form, you’d see her as a contender by earning time in prologue, the odd bonus second and being able to scale the Muur. Her form will be worth keeping an eye on.

Barbara Guarischi has managed to have a couple of chances to sprint recently. She was 2nd in mid-April at the Vuelta CV Feminas and then finished 3rd at the Dwars door de Westhoek at the start of June. You can’t see her beating the likes of Wiebes but she can be top-5 on stages here. There’s a chance the team works for Sara Martin as well. She was 7th at Ronde de Mouscron and just finished 3rd in the Spanish Nationals. There’s a way you can see Martin finishing high in the GC too.

Team BikeExchange have Arianna Fidanza who’s got a few good results in sprints this season. She was recently 4th at Dwars door de Westhoek and took a 2nd and 3rd at Setmana Ciclista Valenciana. Fidanza has said she’s feeling good and confident at the moment. Drop’s Emilie Moberg finished 2nd in the Norwegian Championship at the weekend with Heine making a late break ahead of her. She was 4th at Scheldeprijs which is comfortably her best non-nationals result of the season. The flat stages 1 & 2 will suit her, so long as she avoids getting caught out by the wind like she did at De Panne.

Lotto’s Jesse Vandenbulcke unfortunately crashed at the Belgian nationals, although still finished 24th. She was in the front group at the time when the front wheel slid out from under her. That’s now happened a couple of times in 2021 to her. She was 5th in the TT so has a big engine for the prologue here although her best result of the season is now 3 months ago. She was 5th at Omloop van de Westhoek and if all goes well, she can repeat that performance here too.

Jolien d’Hoore and Lotte Kopecky are both on the Belgian national team interestingly. D’Hoore has been consistent so far in her final season. It’s been a while since she took a win, on the 1st stage of the Healthy Ageing Tour in March. She’s had a tonne of top-10s since then. It will be curious to see if d’Hoore gets the shout on the flat sprints ahead of Kopecky. Lotte Kopecky is still in great form, she’s just done the double at the Belgian Nats. Her track racing will give her an advantage in the prologue and she can easily pick up bonus seconds and get up the Muur. She’s my favourite for the Overall GC here.

Amber van der Hulst has been doing well in the recent flat Belgian races. She took 3rd place at both the GP Eco-Struct and Flanders Diamond Tour. At non-Women’s WorldTour level, she’s been regularly taking top-10s in her breakout season. She’s got a real chance to be in the mix on Stages 1 and 2 but I don’t think she’ll crest the Muur with the favourites.

The Hitec Products pair of Ingvild Gåskjenn and Anne Dorthe Ysland will be racing for a national team. Both have just finished in the top 10 of the Norwegian nationals this weekend. Gåskjenn has a best result of 11th outside of Norway in 2021. She just missed out on the top-10 of a Thuringen stage but still took a great 16th in GC. Ysland was 5th in the Norwegian Nats TT and was also pretty consistent at Thuringen. She was 27th Overall and 5th in the Youth competition. Both feel not far away from a big top-10 result at a major race.

Alana Castrique is the new Belgian U23 national champion after finishing a great 3rd place in the road race. She’s had a quiet season outside of that result with a best of 26th place at Dwars door de Westhoek. She may have to work for Vandenbulcke but that result at nationals means she could get an opportunity soon.

It’s a Belgian race, so there’s another Belgian who did well at the weekend! Shari Bossuyt was 4th in the road race and also 7th in the time trial. She’s just 20 years old but continues to show promise, even if her race results in the rest of the 2021 calendar don’t show too much yet. She has a chance in the prologue and then maybe she can repeat her nationals performance on the Muur van Geraardsbergen too.

Ann-Sophie Duyck was impressive in her solo break in the Belgian national road race. She held off the peloton for a long time before ultimately getting caught as the peloton woke up and started working together efficiently. She’s a strong time triallist and so has a chance in the prologue.