Krista Doebel-Hickok capped off an impressive week of racing for Rally Cycling at Zwift’s Tour For All, summiting the Alpe du Zwift climb in fifth place. It was Doebel-Hickok’s fourth top 10 performance of the week that helped the women finish sixth in the overall standings. Men’s highlights include a runner-up finish by Pier-André Côté on stage 4, sixth for Nickolas Zukowsky on stage 2, and fifth in the sprint opener by Côté.

The Tour For All was not only a place where you could watch the best cyclists in the world go toe-to-toe in a virtual environment but it also raised awareness for Doctors Without Borders. An initial $125,000 donation was made by Zwift at the start of the professional event with an additional $125,000 pledged if 250,000 users rode any of the Tour For All stages through the end of May. Early estimates indicate that over 75,000 have answered the call with three weeks remaining. 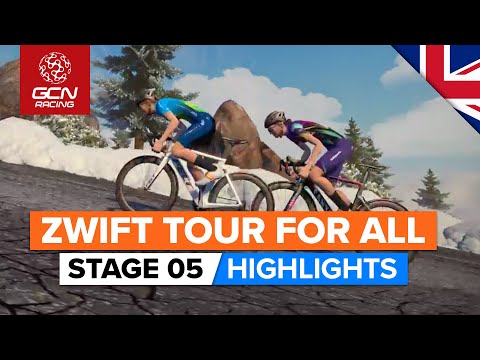 Preparing for a race that is being broadcast mid-day on Eurosport meant that North American athletes had to choose between a little extra sleep or properly preparing each day. If you’ve been following us throughout the week, you know which kind of athlete Krista is.

“My earliest wake up was 1:45 am,” said Doebel-Hickok. “I get up, have coffee, stretch, eat breakfast, set up everything outside which takes a while, start my warm-up about 40 min out, knock-back a Clif caffeine gel, and then it’s go time.”

The queen stage may have suited Doebel-Hickok the most on paper, but racing all but one stage full-gas had taken its toll.

“I’m really proud of the effort that I put in,” said Doebel-Hickok. “We knew racing four out of five stages would be challenging but I wanted to show myself I can go hard even when I don’t feel awesome.”

Team directors are in constant contact with the athletes leading up to each stage but when the flag drops, they rely on their family members and roommates to relay important information.

“I texted with Krista’s dad during the stages to give her encouragement and to pass on any information that could be useful,” said Joanne Kiesanowski. “It’s nice when our riders’ loved ones can see the efforts in real-time and experience the suffering they go through.”

For those wondering what it takes to finish fifth in the #TourForAll‘s finale on Alpe du Zwift – wonder no more. Amazing effort, @KristabelDH!

Earlier this week, the team released the latest Healthy Habits Challenge – Dance Away Stress. Krista’s response was a clear indication of where her priorities lie, “‪I’ll be dancing on the pedals all week ????????❤️‬.”