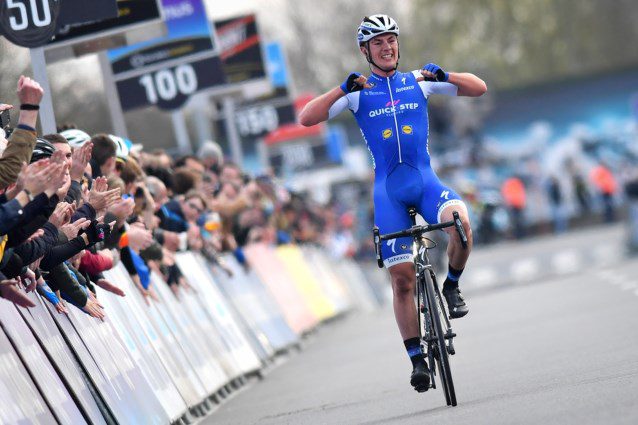 For 2018 Dwars Door Vlaanderen has a new date and a new route. Effectively swapping places with De Panne, Dwars Door now takes place a few days ahead of the larger event of the Tour of Flanders. Cresting some of the same climbs, this positions it as a warm-up event for the big deal on Sunday. It’s because of that, we don’t get to see the riders crest the Oude Kwaremont or the Paterberg this year – something about not interfering with the building of the VIP tents – boo!
Instead we get repeated climbs of the Knokteberg, Kruisberg and Kluisberg and the some of the same late parts of the route as E3 (Vossenhol and Varentstraat).

Quickstep have brought a loaded team to this race. They’ve got last year’s winner Yves Lampaert, who recorded two top 20s over the last week but no stand out result in 2018, Elia Viviani who finished an emotional runner-up in Gent-Wevelgem and E3 Harelbeke winner and twice a Dwars Door winner Niki Terpstra. If it comes down to a sprint then Viviani will be the main horse to back, but other than that it’s proving hard to predict which Quickstep rider will be doing the disappearing act off the front. It could even be Zdenek Stybar, who has two top-10 finishes in E3 and Gent Wevelgem this year. They’ll be the team to beat.

Olympic champion Greg Van Avermaet takes his usual spot as a favourite – he finally arrived in 2018 with a podium spot in E3 Harelbeke last Friday – a 14th place with the lead group in Gent – Wevelgem is also a sign his form isn’t that far off. Oliver Naesen is another with strong results over the weekend, a 4th and a 6th to announce his presence after a quiet early part to 2018. He’ll be teamed up with Romain Bardet, who after his strong performance in Strade Bianche will be hard to ignore – even if traditionally GC contenders don’t at all well in Dwars Door Vlaanderen. The Strade Bianche winner Tiesj Benoot is also racing. That famous win, a 5th in E3 Harelbeke as well as tearing it up at Tirreno Adriatico shows he has bags of form – he’s also finished in the top 10 here twice before so has some good history.

Trek have their usual two-headed attack of John Degenkolb and Jasper Stuyven. Degenkolb has gone missing a bit so far in the 2018 classics with no results of note to speak of, but we know what he’s capable of. Stuyven is more likely to finish in a good spot, he’s on a run of 3 top 10s from Milan Sanremo, E3 and Gent Wevelgem. I’m still backing him for a big landmark result in 2018. Movistar’s Alejandro Valverde is making an appearance, fresh from a stage race win at the Volta a Catalunya, he’ll be looking to get a similar result to his 4th place in Strade Bianche in preparation for the Ardennes Classics. The form is there and despite finishing 36th in his one and only previous ride at Dwars Door in 2014, has the potential to finish higher with less cobbled climbs included – making the race more Ardennes like. If he’s there at the end, I can see him outsprinting most people (excluding the likes of Viviani) for the win.

Sep Vanmarcke has had a mixed bag so far this year, either finishing high in the top 10 or nowhere. He had to make a late attack towards the end of Gent – Wevelgem knowing he’d be outsprinted anyway. He could maybe have finished a few positions higher than his 21st otherwise but it’s a good sign that he’s attempting to win, rather than sit in the wheels.
Edward Theuns will lead Sunweb, more was expected of him over the weekend than two finishes in the 30s, he recorded a 6th in Omloop but that’s been easily his best result of the season so far.

Sky’s Gianni Moscon got a top 10 in E3 Harelbeke but ultimately missed out in Gent – Wevelgem by ending up too close to the barriers at the bottom of the Kemmelberg. Having to get going again from a standing start, he ultimately missed the selection that took place for the lead group. He finished 45th but had the legs to finish higher. Finally, you can’t rule out Wout Van Aert, he was in the mix again at the end of Gent – Wevelgem, only better sprinters preventing him from finishing higher than 10th. He’s shown that he can definitely cut it at Worldtour level on this sort of terrain.

UAE’s Alexander Kristoff hasn’t shown off his top form so far in Belgium with two finishes outside of the top 20. We know what he’s capable of but he hasn’t shown it so far. Guillaume van Keirsbulck finished in the lead group of Gent – Wevelgem, he’s also finished 5th before in Dwars Door Vlaanderen. When he has the legs, he can finish highly. Heinrich Haussler continues his semi-renaissance season. A top 20 in E3 Harelbeke shows he’s starting to get some alright results.

Freed from helping Gent – Wevelgem winner Peter Sagan, Bora’s Marcus Burghardt will get free reign to ride for himself in Dwars Door Vlaanderen. Top 20s whilst working as a domestique in Gent – Wevelgem, Strade Bianche and Omloop shows that given the chance, he’s a good shout for a top 10 position. The Mitchelton-Scott combination of Mat Hayman and Luke Durbridge are decent outside bets. Durbridge finished 4th here last year but only has a high of 23rd in E3 Harelbeke to speak of in 2018. Hayman has been on domestique duties and only has a high of 33rd in Kuurne – Brussels – Kuurne this Classics campaign, but is down as the leader for this race.

Cofidis’ Christophe Laporte finished 13th in Milan Sanremo and an excellent 4th in Gent – Wevelgem on Sunday. He’s becoming a genuine classics contender and on the cusp of making the jump from the Outsiders section to the Contenders. Another strong result here and he’ll do just that. WB Aqua Protect’s Alex Kirsch rode at the front for a lot of Gent – Welvegem before ultimately finishing 31st. He’s finished top 30 in Dwars Door before and if he can recreate the form that saw him come 6th in Le Samyn this year, he can finish highly.